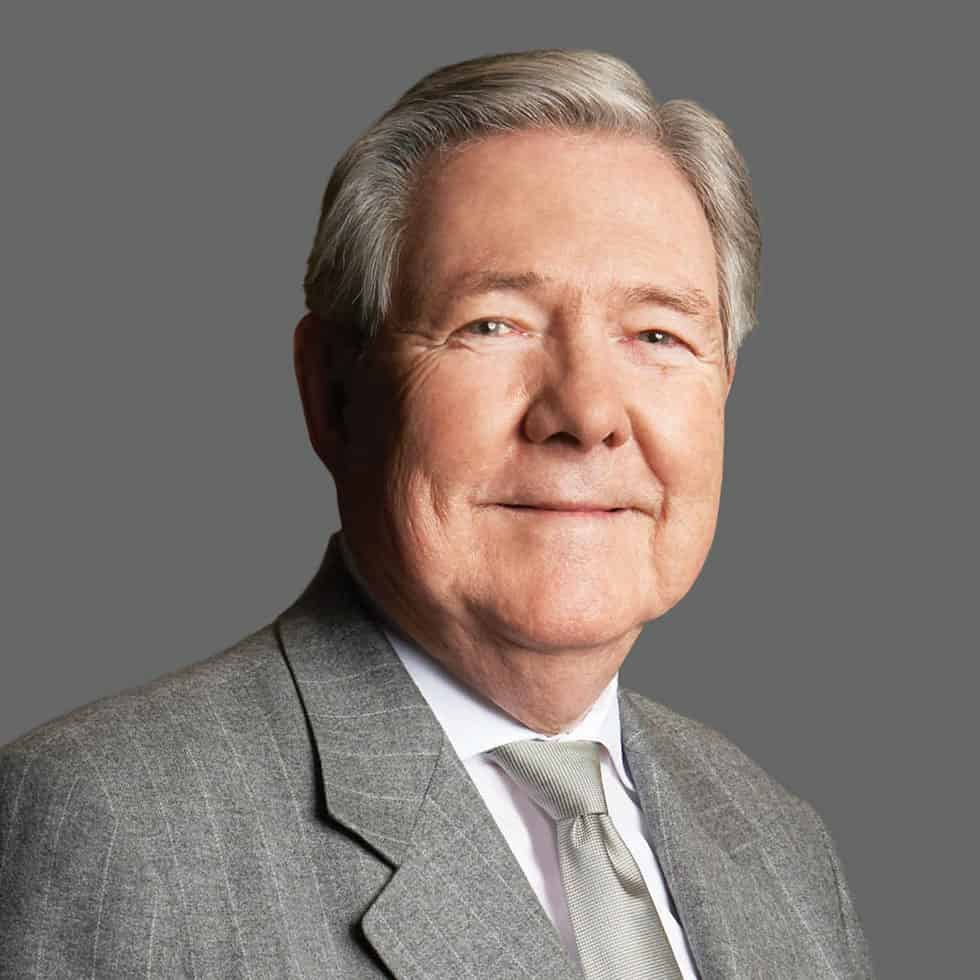 Frank A. Bennack Jr. is executive vice chairman of Hearst, one of the nation’s largest private companies engaged in a broad range of publishing, broadcasting, cable networking, and diversified media and information activities. He is also chairman of the company’s executive committee, a director of Hearst, and a trustee of the Hearst Family Trust, established under the will of William Randolph Hearst. In addition, he sits on a number of corporate committees and the Hearst Foundations board, where he has served for more than 25 years.

Bennack served as Hearst’s CEO for more than 28 years. He directed the company through an unprecedented period of growth from when he began his first tenure as CEO in 1979 through June 2013, when he stepped down—increasing revenues 14 times and growing earnings more than 30 times, through investments, acquisitions and startups. Today, Hearst comprises some 360-plus businesses and 20,000 employees.

Under his leadership, the company launched three leading cable networks with its partner ABC (now the Walt Disney Company), A&E, HISTORY and Lifetime and invested in the ESPN family of networks, now in 190 countries and territories. On Bennack’s watch, Hearst marched toward diversification and global expansion, including its nearly $1 billion acquisition in 2011 of Lagardère’s 100 international titles outside of France, its purchase of healthcare information leader MCG and ownership of global ratings agency Fitch Group. Bennack was also instrumental in the decision to create what today is Hearst Television, Inc., one of the nation’s largest non-network-owned television station groups, which operates 33 television stations. During his tenure, Hearst launched such magazines as Country Living, Food Network Magazine, HGTV Magazine, Marie Claire and O, The Oprah Magazine.

Bennack’s operating talent and ability to envision and oversee transformation extend beyond his role at Hearst. His influence on corporate boards of directors—many lasting decades—has impacted the worlds of finance, at J.P. Morgan Chase and its predecessor companies Chemical Bank, Manufacturers Hanover and Chase; retail, as an outside director of Allied Stores, which became the modern-day Federated/Macy’s Inc. and was the parent company of Brooks Brothers, Jordan Marsh, Stern’s and Le Bon Marché; and pharmaceuticals, as a director of Wyeth, formerly American Home Products, which was acquired by Pfizer in 2009.

Bennack is currently a director of Ralph Lauren Corporation. He is chairman of Hearst Magazines UK, a wholly owned subsidiary of Hearst. Bennack is also a governor and former chairman of NewYork-Presbyterian Hospital and its Healthcare System, a managing director of the Metropolitan Opera of New York, chairman emeritus of Lincoln Center for the Performing Arts and chairman of the Paley Center for Media (formerly the Museum of Television & Radio). He was the 1992–93 chairman of the Newspaper Association of America (formerly the American Newspaper Publishers Association).

Prior to his first stint as chief executive, Bennack served as executive vice president and chief operating officer of Hearst and, before that, as vice president and general manager of the Hearst Newspaper Group. He also served in a variety of management posts, including a seven-year tenure (1967 to 1974) as publisher and editor of the San Antonio Light.

As a teenager, the San Antonio native was host of both television and radio programs. He eventually entered publishing in his hometown and rose from classified advertising salesman to newspaper publisher by the age of 34.

Bennack has received honors for his charitable work from such organizations as the American Heart Association, United Cerebral Palsy and the Inner-City Scholarship Fund of New York. His industry awards include the Gold Medal from the International Radio & Television Society in 1991, the Trustees’ Award (Emmy) from the National Academy of Television Arts and Sciences in 1993, the 1997 Center for Communication Award, the Distinguished Public Service Award from the Advertising Council in 1999 and the 1999 Distinguished Service Award from the National Association of Broadcasters. In 2007, he was elected into the American Academy of Arts and Sciences.

STEVEN J. CORWIN, MD: Good evening. I’m Steve Corwin, president and CEO of NewYork-Presbyterian Healthcare System. First, let me congratulate all the PEN America awardees and honorees this evening. PEN America really represents so much for this country in terms of freedom of expression, the ability to have responsible journalism, and of course, the struggle for common human rights and human decency. I can’t think of a more fitting person to receive an award than Frank Bennack.

Frank has been a terrific leader of Hearst for so many years—legendary, certainly representing responsible journalism, and fighting always for freedom of expression. As the chairman of NewYork-Presbyterian and its board, he helped to guide the development of one of the country’s great institutions. Frank is from both Texas and a transplanted New Yorker, and perhaps that’s a great example of the fact that we can put country over our divisions, that we can strive for common humanity, that we can make sure that the least among us receive the most. Thank you, again, for allowing me to speak. Frank is truly a terrific example of not only a great leader, but a great American. Thank you.

STEVEN R. SWARTZ: Good evening. I’m Steve Swartz, chief executive of the Hearst Corporation. Our 133-year-old company has been unusually blessed with two larger-than-life leaders: our remarkable founder William Randolph Hearst, and Frank Bennack, who remade Hearst for the modern era. In his almost 30 years heading our company, revenues grew 14-fold, and earnings grew more than 30 times. But that doesn’t come close to taking the measure of this man. For many in this city and everyone at our company, Frank is the living embodiment of integrity, wisdom, judgement, and compassion. He is one man where his handshake truly suffices. No contract needed. Thus, Frank has been called upon to lead some of this city’s most prestigious institutions: NewYork-Presbyterian Hospital, Lincoln Center, and the Paley Center for Media.

Frank’s abilities as an orator have been recognized since his boyhood, where a young Frank was San Antonio’s answer to Dick Clark. Last year, that mastery of the spoken word transferred seamlessly to the printed page with Frank’s magnificent and so appropriately titled book, Leave Something on the Table. Throughout his career, Frank has been a staunch defender of the First Amendment and a fierce advocate of the journalism practiced at our more than 20 newspapers, more than 30 television stations, and more than 300 magazines around the world. His is truly a life of doing well by doing good. All of us at Hearst thank and commend PEN for recognizing Frank Bennack’s lifetime of achievement in media, journalism, and philanthropy. Thank you.

SOLEDAD O’BRIEN: I am proud to introduce Frank Bennack as PEN America’s corporate honoree for 2020. Frank has been CEO of Hearst not once, but twice, and now serves as executive vice chairman. Hearst is a company built on journalism, and Frank’s contributions and outstanding leadership have established it as an organization that believes in doing well by doing good. His personal touch has driven his business success. He’s always understood the importance of relationships. And he positions people to succeed. And he serves.

Frank’s approach to journalism is that every story is covered, every story is told, and every story should help someone. That’s also PEN’s belief, and Frank is its embodiment. He’s held to this premise in print, in broadcast, and digital, all the ways media connects us. Frank created a culture at Hearst that takes every opportunity to help. He’s known for bringing people together, and not just as a tenacious fundraiser, although he is that. His generosity infuses many worlds: education, the arts, healthcare—those are just a few. He’s an architect of public-private partnerships. Frank became an author himself in 2019. The title of his book is Leave Something on the Table. And that describes him perfectly. His message? To succeed, be gracious. Make sure everyone wins. Lead with an open heart. Frank has received numerous honors for his service to the American Heart Association, United Cerebral Palsy, and the Inner-City Scholarship Fund of New York, among many groups. Tonight, we add another. Congratulations to all of tonight’s honorees, and please give a warm welcome to Frank A. Bennack Jr.

FRANK BENNACK JR.: Good evening, everyone. Thank you for this unexpected honor. I say unexpected because the last place I thought I’d be after a long business career highlighted by a couple of fluke retirements, is at a podium among the literati. Actually, I guess I have to say it’s the second-to-last place I’d expected to be tonight. The last place I expected to be, to accept this honor, is in my own office, coming to you via the new favorite communications platform called Zoom.

I don’t feel quite as much out of place as I might have in prior years, since in October of last year, Simon & Schuster published my memoir, titled Leave Something on the Table. My new status as a published author is certainly not the reason I’m the corporate honoree tonight. I am however, hopeful that putting down on paper my more than half a century as a corporate executive and defining the ethic-based leadership I believe essential in business has some value for today’s and tomorrow’s corporate successors.

The essential message of Leave Something on the Table is that the other guy doesn’t have to lose for us to win. I’m here tonight with you instead because of the long-term support of PEN America by Hearst, the company I represent, and my personal support of what PEN America stands for—the expression of ideas, the power of books and the written word to shape democratic and humane values.

There are those among us who accept that what we have entered is the so-called “post-truth era,” where acceptance of the absence of truth is okay, as long as personal objectives are achieved. I reject that contention out of hand. Truth matters. Words matter. I’m here in support of PEN America because I am keenly aware that PEN not only espouses those principles, but promotes them among and in support of the nation’s leading authors, journalists, editors, and their allies. All of you who are with the sound of our voices tonight and are here for the same reasons I’ve articulated are, I hope, proud of that association, but also committed to preserving what PEN stands for. Thank you very much.

FRANKLIN LEONARD: Frank, thank you once again for being such a steadfast supporter of PEN America.