Works of Justice: How to Write a Novel in a Month (While in Prison), Week 2 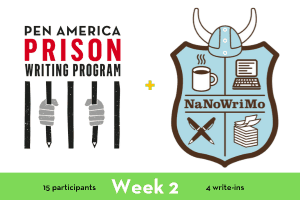 This November, we are partnering with National Novel Writing Month (NaNoWriMo) to pilot a new aspect of our mentor program that takes the concept of mentorship out of its one directional engagement (outside mentors, inside mentees) and moves in multiple directions. Four currently incarcerated fiction writers are working as peer facilitators with groups in the prison where they live. We are now in week 2 of the NaNoWriMo challenge. Our goal for this partnership is to go beyond word counting to highlight the power of a community of writers connecting inside and outside prison. We are so grateful for the feedback and notes we’ve received to share with our participating writers so far, and invite you to send encouragement or share your own updates in the box below.

Updates from our NaNoWriMo facilitators:

So far the group has went gung-ho on the project, with several of the members achieving 4-5,000 words a day on the novels they have begun. Everyone decided to write an original project and wait to start on Nov. 1st, as to be fair to the others. We all meet once a day to give progress reports, and celebrate the day’s successes. The most astounding thing to come of it so far, has been several COs who’ve commented that they too are writing novels, shorts, and essays. A new light seems to shine from both sides of the fence. Everyone wishes they had received the workbooks earlier, as they have proved amazingly insightful. I’m very impressed, and the group is working like they can see and visualize their dreams being in sight. Thanks.

Last night was our monthly writers’ meeting; so far, things are going great and not-so-great, but mostly great. Everyone showed up for the meeting, for one thing, and nobody has given up their attempt on the NaNoWriMo mountain. In fact, we actually *gained* a writer, Will Peters, who enthusiastically decided to jump in even though he’s a week behind (this was his first meeting with the writers’ collective). Each writer has received his workbook — for which, much thanks! (I’ve shared mine with Will.) So far, everyone’s been making regular progress, but almost everyone is behind their word-count targets. A common theme was expending too much effort going back and making edits to stuff already written. We are lucky to have access to a resource person from MPWW (Minnesota Prison Writing Workshop), and she was able to share her experience and some advice, based on her 18 (!) years and counting doing NaNoWriMo. Basically, more writing, less (ideally, NO) rewriting :-). And, as she pointed out, every word written is, in the end, a word that might never have been written without having made the try. Matt’s still working out what his novel’s actually about, plot-wise, but he’s got a strong theme in mind, so it’s all coming together as he writes. The rest of us have something in mind for plot, though no doubt it’s all growing and changing as the texts themselves grow. I passed along the messages & morale-boosters, and I honestly don’t think I’ve seen a group of men more touched, and honored, by the good will and support of strangers. Warmed and strengthened and newly resolved, we set forth into the frigid Minnesota night, ready to write on.

11/2 – I have written 10,000 words in two days. I’ll slow my pace now, as I teach during the week, but it feels good to have made headway. This story wouldn’t exist if not for your challenge. So thank you, I rather like it. I realize that you in no way have asked me to send you what I’ve written.

11/12 – Please excuse my absence, our institution has been on lockdown. Haven’t been able to meet with my group, but I’ve been badgering a guy in my pod about this and I’m including a statement from him. The lockdown was perfect for work. I finished my novella (32k words) on the 6th. For the rest of the month I’m going to go over it and work on a graphic memoir I’ve been dithering over. This challenge really motivated me to find my limits. Thank you.

[Thomas Hix, from Smitherman’s group provides his update:] I’m working on a sci-fi horror story set in space. The story revolves around the remnants of humanity looking for ways to survive in space without our precious Earth and finding something terrifying.

Matthew Mendoza‘s updates come through regular postal mail and are subject to delay. We hope to share updates from his group soon.

1. What is creative writing?

We’re all creative writers at night when we dream: we transform the events of our lives, the people we know, our memories, fears, and wishes into vivid, sometimes terrifying, sometimes joyful, stories: full of dramatic landscapes, suspense, symbolism, mystery, and meaning.

Fiction, to my mind, is the dream life of the culture around us. Works of fiction from earlier periods are narrative artifacts of human life at that time and place. To some extent, we writers are in control of the stories we tell, but the culture also operates through us, without our conscious knowledge. In the end, those cultural forces may be the most important and lasting features of what we end up creating.

A lot of things that are clearly in my work seem to get there without my consciously knowing it. I can feel that something is powerful without knowing why it’s powerful. Often my readers educate me, later, about why something works—and what it means.

One small example: In my story collection Emerald City, there is a piece called “Sacred Heart:” a love story about two Catholic schoolgirls. One girl sees another cutting herself in the bathroom, and becomes fixated on her. The self-injurer, or love object, I named “Amanda.” That name came to me spontaneously, as names often do. What I didn’t know—at least not consciously—is that “Amanda” means “beloved” in Latin. I named the love object in my story “beloved.” But I’ve never taken a Latin class.

2. My writing method: Accessing and my unconscious

My entire writing method is geared toward tapping into a larger store of knowledge, symbolism, and meaning than my conscious mind can hold. I try to achieve this in several ways:

3. My biggest challenge: Writing without faith

My inner critic can be fierce, harsh, and abusive. I often have no faith at all that what I’m doing will ever work out. This state of mind doesn’t change from book to book. No matter how many books I’ve published, it always feels like I’m starting over. And the more I feel is expected of me, the more sickened I am, sometimes, by the thought of failing to meet those expectations.

I have yet to learn how to silence that inner critic, but I know from experience that I can keep writing through the noise. Doggedness is my greatest gift: I. Just. Keep. Going. And little by little, as the work improves, I become more hopeful. I don’t need hope in order to write; on the contrary, writing is what gives me hope. 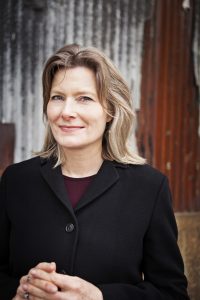 Jennifer Egan is a Pulitzer-Prize winning writer and the President of PEN America. Her most recent work, Manhattan Beach, won the 2018 Carnegie Medal for literary excellence and was recently selected as the One Book, One New York City-wide read. She is also the author of A Visit from the Goon Squad, which won the 2011 Pulitzer Prize, the National Book Critics Circle Award for Fiction, and the Los Angeles Times Book Prize. Other works include: The Invisible Circus, a novel that became a feature film starring Cameron Diaz in 2001; Look at Me, a finalist for the National Book Award in fiction in 2001; and The Keep. Her short stories have appeared in The New Yorker, Harper’s, Granta, McSweeney’s, The Best American Short Stories, and other magazines and collections. She is a recipient of a Guggenheim Fellowship, a National Endowment for the Arts Fellowship in Fiction, and a Dorothy and Lewis B. Cullman Fellowship at the New York Public Library. Her non-fiction articles appear frequently in The New York Times Magazine, and her 2002 cover story on homeless children received the Carroll Kowal Journalism Award. Her article “The Bipolar Kid” received a 2009 NAMI Outstanding Media Award for Science and Health Reporting from the National Alliance on Mental Illness. She was born in Chicago and raised in San Francisco. She joined the PEN America Board in 2012.

Sign up to get updates when a new blog is posted

We’ll be sharing excerpts of works in progress and status updates from our inside writing groups on this blog over the course of November. To be updated when a new blog is posted, please sign up here:

Works of Justice: How to Write a Novel in a Month (While in Prison)