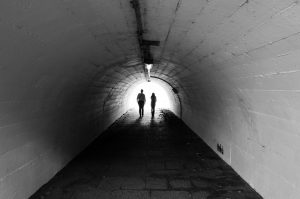 David A. Pickett was awarded Third Place in Fiction in the 2019 Prison Writing Contest.

Randy picked up a geode—a black, gnarled rock, sliced open to reveal a crystalline pocket within—and turned it over in his hands. It was weird, such an ugly exterior concealing a wonder within. He nearly dropped it when the woman spoke behind him.

His mouth dry from nerves, Randy swallowed, set the rock back on the gift shop shelf, and turned around to face the tour guide. He was lanky, awkward in a body he’d seemingly never grown into. He looked like a 30-year-old teenager, in his worn jeans and unzipped sweatshirt over a faded Metallica T-shirt, from the days when he and Diane still went to concerts, before marriage and kids. He tightened his ponytail nervously, then shoved his hands in the pockets of his sweatshirt—one of which crackled from an empty shopping bag—and smiled briefly.

“Yeah, I wanted to take a few more pictures. I liked that room with all the, uh—” He couldn’t remember the names, there had been so many names; he mimed columns with his hands.

“Those! They were cool.”

The guide smiled and looked around. “Where are the kids? Are they coming too?”

“My wife has a headache, so she’s not going, and Coop and Teeny wanted a picnic, so . . .” He trailed off. Mentally, Randy cursed at himself; he didn’t want to share any identifying information, like names. Even if they were nicknames, they were too close to the originals, Cooper and Tina. Their “picnic” consisted of bologna and Wonder Bread sandwiches washed down with warm Pepsi, out in the parking lot. He hoped that Diane was coping with them okay. She had a tendency to get snappish, especially when she overheated, and their van had no air conditioning.

“Well, we’re glad to have you back. We’ll head down in just a couple of minutes.”

The entrance to the caves was at the back of the gift shop. Randy trailed the rest of the tour group, a dozen or so people, down the stone steps that led into the caverns below. He stepped gingerly, back painful and threatening to spasm, despite the oxycodone he had taken just a couple of hours before. A fall from a roof had left him unable to work, at least as a roofer, and he refused to apply down at the Wal-Mart despite Diane’s urging. They were making it, if just barely, on her home health aide pay and his disability, and if it hadn’t been for her sister’s wedding—the reason for their road trip—he wouldn’t have been so desperate for money. Diane’s family had always looked down on him. He had come from the poor side of town, and even when he’d been working, he hadn’t been able to support the family to his in-laws’ standards. Randy couldn’t face showing up to his sister-in-law’s wedding without a gift, and, even worse, maybe having to ask for help with gas money to get back home. He couldn’t face the expression on his mother-in-law’s face, the unsurprised disappointment of Diane’s father.

The guide’s bright flashlight beam played over the walls as they descended, adding to the weak yellow light cast by battery-powered lamps mounted on metal boxes along the way.

The tour group went down the steps and through the tunnels, while the guide pointed out features of the caves, reeling off her polished spiel about geologic time and the corrosive effects of water on limestone. Randy had heard it all already, of course. He hung back, at the tail end of the group, hands in his pockets. He avoided making eye contact with any of the others.

They went through the Spillway, the Map Room, the Cathedral with its columns of stone and colored mineral deposits mimicking stained glass, where he took several pictures with his phone, not bothering to look at the results. After the Dragon’s Lair, with its glittering throat leading to further, inaccessible wonders, they reached the Galaxy Room. As they entered this cavern, where the ceiling opened out and the walls pulled back to make a large open space, Randy moved past the rest of the group to stand near the guide, who had her hand on the lamp box mounted on the wall. The rest of the tour group milled around, and she raised her voice to be heard over the murmur. Echoes reflected her every word.

“This is the Galaxy Room. You may be wondering why we call it that, when it’s a cave deep underground, while the galaxy—our galaxy, the Milky Way—is far above, in the night sky, invisible from here. I’m about to turn out the lights and show you.

“Now, be careful—don’t try and walk around when I turn the lights off. We don’t want anyone to fall and get hurt. Also, your phones and cameras may not be able to capture what you’re about to see. Please don’t use flashes. They won’t help and they’ll ruin the experience for others.”

Randy was sweating heavily. He shifted a step closer to the guide, who smiled at him. She flipped a switch to turn the lamp off, then clicked off the flashlight. The ceiling of the cavern sprang to phosphorescent life. What had been dull gray was now marked with sprays and swirls of glowing colors, pinks and greens and purples, as if the ceiling had been painted with light. It didn’t much look like the Milky Way; it was a more fantastic collection, like glowing nebulas, clouds of stardust and remnants of supernovas, splashed across otherwise starless space.

Randy pulled the pistol out of his sweatshirt pocket and pointed it at the tour guide. He spoke in a low voice. “Give me the flashlight.”

At first she didn’t seem to understand what was happening. She said, “It’ll just be a couple of minutes, then I’ll turn the lights back on.”

“Give me that flashlight,” he said, voice slightly raised, and he waved the pistol in her direction. He realized she couldn’t see it. “I have a gun,” he said, his voice cracking slightly on the last word. His stomach was churning and he felt like throwing up. He just wanted this whole thing to be over, to be back out on the road with the windows down and the wind blowing through, with Randy Travis on the radio singing about a barbecue.

“What?” the guide said, her voice rising. There was a click, and the flashlight came on.

The sudden light startled Randy, and he nearly dropped the gun. He waved it at her again.

“Give me that light!”

Most of the group was oblivious to what was happening. They were still looking around the cavern, talking to one another about what they’d just seen. One woman, however, had noticed. She saw the pistol in Randy’s hand and uttered a little scream. She clutched at the arm of the man she was with.

Randy’s gut spasmed. He raised his voice and spoke to the entire group. “Hey, people. This is a robbery.” He cleared his throat. “I need your wallets and your money. And gimme that damn flashlight!” He poked the pistol toward the guide, who had gone very pale. She handed over the flashlight.

Randy took the light and lodged it under an armpit, then reached into his pocket and pulled out a plastic grocery bag. He handed it to the guide and said, “Get everybody’s stuff in that.”

One old man had sat on the floor of the cave, massaging his chest. Others pulled out their wallets and handed them to the guide. A woman tried to give the guide a large purse, and Randy realized that there was no way it was going to fit in the bag. He called out, “Just wallets and cash, people. I don’t need no damn purses.”

It seemed to take forever. Randy was wet with sweat by the time the guide brought the bag back to him. It was lumpy and it jingled—people had put coins in, too—and he almost dropped the flashlight when he grabbed the handles from the guide.

“All right, people, you all just stay put, I’m going to go on up and get out of here. I want you to wait 15 minutes before you move from this room. Got that?” He waved the pistol at the group. There was a general murmur of assent. He wasn’t worried about them phoning for help; there was no signal down here, in the depths.

“Can I turn the lamp back on?” the guide asked.

“Once I leave you can.” Randy backed up toward the exit to the cavern. The old man had lain back on the rock, his blue-haired companion cradling his head in her lap. She was bent over and seemed to be talking to him in low voice. Randy backed out of the room, turned, and fled toward the exit. Behind him, the lamp flickered on.

Randy shoved the gun back into his pocket, and moved rapidly through the last caves, stopping at each lamp box to turn it off. It wouldn’t slow them down much, he figured, but it was something. It was in the next to last room, when he switched off the lamp and turned to leave, that he tripped over a stone ridge in the floor, sending the flashlight skittering across the floor and dropping the plastic bag. The flashlight went out. Coins rolled across the floor, and Randy’s back erupted in pain, as if molten steel had been poured down his spinal cord. He let out a small scream.

He stayed down on his hands and knees, in the dark, for several minutes, hoping the pain would subside, would relent enough to allow him to get up. It did not. He laid down on the floor, on his side, knees drawn up toward his chest. Hot tears rolled across the bridge of his nose and dripped onto the rocky floor of the cave. He thought about Diane, sitting up in their minivan, sweating in the heat; about Teeny and Coop, eating limp bologna sandwiches and waiting for their dad to show up; about his mother- and father-in-law, when they heard the news. He reached into his sweatshirt pocket and pulled the pistol out. He waited for a light.