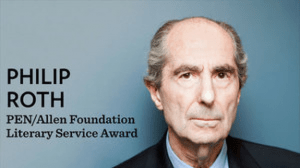 “The American writer in the middle of the 20th century has his hands full in trying to understand, and then describe, and then make credible much of American reality. It stupefies, it sickens, it infuriates, and finally it is even a kind of embarrassment to one’s own meager imagination. The actuality is continually outdoing our talents.”
—Philip Roth

Today the PEN America community mourns the loss of Pulitzer Prize-winning author Philip Roth. A PEN America Member since 1974 and multi-year awardee, Roth was a prodigious writer who will be remembered for his extraordinary literary contributions and fervent advocacy of freedom and democracy in Eastern Europe and around the world. His canon tackled an endless variety of provocative themes, including male, American, and Jewish identity. Roth’s bracing insights, penetrating eye, and ability to put his pen on the most sensitive and delicate aspects of the human experience were unparalleled. His characters, plotlines, and turns of phrase are marked indelibly on the psyche of generations.

In May 2013, almost exactly five years ago, PEN America awarded Roth the PEN/Allen Foundation Literary Service Award at the 2013 PEN America Literary Gala. We recognized his critically-acclaimed work for captivating readers around the world and strengthening their understanding of the human condition in original and powerful ways. During his acceptance speech, Roth reflected on his efforts on behalf of the writers of the Eastern Bloc during the Cold War, including his frequent travels to Prague and his mobilization of leading American writers to provide direct support to persecuted colleagues.

PEN America’s then president, Peter Godwin, presented the PEN/Allen Foundation Literary Service Award to Roth and commented on his profound impact on literary culture: “His caustically intelligent, transgressive, and brazenly honest writing has probed the frontiers of the form, laying bare the constraint of kinship, religion, and social convention.”

In his acceptance speech, Roth commented on rising threats to free expression. His perspective was later included in a June 2013 article penned by PEN America Chief Executive Officer Suzanne Nossel entitled “Obama’s Surveillance State,” published in Foreign Policy: “So it was and so it is in the time of a totalitarian system. Every day brings a new heartache, a new tremor, more helplessness, and yet another reduction of freedom and free thought in a censored society already bound and gagged.”

Roth received the inaugural PEN/Saul Bellow Award for Achievement in American Fiction in 2007, later serving as an award judge and helping to secure support for this distinguished honor. 2018 PEN/Saul Bellow Award judge and acclaimed novelist Louise Erdrich said: “Philip Roth’s delight in literature shaped an enduring commitment to other writers. He supported many first novelists with fullhearted generosity. As the primary founder of the PEN/Saul Bellow Award for Achievement in American Fiction and often a judge, he took pleasure in conferring the honor on others. He championed free expression, and was a ferocious foe of censorship, whether from the right or the left. Also, he was insanely funny.”

In December 2014, Roth generously annotated first editions of his novels Portnoy’s Complaint and American Pastoral as contributions to PEN America’s First Editions Second Thoughts Auction, which raised essential funds that led to the expansion of PEN America’s efforts to mobilize in defense of free expression. Roth was the only participating author who, at his own initiative, offered to annotate a second work as a gesture of support to PEN America.

Revered as one of the most celebrated authors of his generation, Roth received worldwide acclaim for American Pastoral, for which he earned the Pulitzer Prize in 1998. He is a three-time recipient of the PEN/Faulkner Award for Fiction in 1994, 2001, and 2007. He has twice received the National Book Critics Circle Award and the National Book Award. In 2002, he joined the company of William Faulkner, John Dos Passos, and Saul Bellow when he received the prestigious Gold Medal in Fiction from the American Academy of Arts and Letters.

The boldly honest writings of Roth altered the trajectory of literature in the United States and around the world. His stalwart commitment to solidarity with other writers and repressed voices leaves a lasting mark on communities far and wide. Roth passed away at the age of 85 in Manhattan, New York, on the same day of the 2018 PEN America Literary Gala that took place near his home on Manhattan’s Upper West Side.