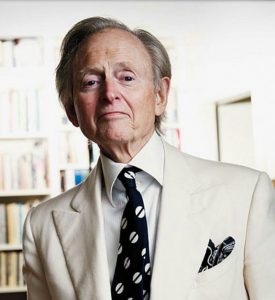 Today, the PEN America community remembers Tom Wolfe, the legendary American author and journalist. He was a pioneer who helped to shape the New Journalism movement, centered on vivid prose and up-close engagement that eschewed the precepts of journalistic objectivity and distance.

A staunch free expression advocate, Wolfe was a passionate supporter of PEN America for more than 30 years. He helped to advance the organization’s mission as a board member from 1988-1999, a ubiquitous and elegant literary host at our annual Gala, a riveting guest author for our Authors’ Evening dinners, and a vociferous advocate for our mission to promote literature and defend free speech.

Wolfe achieved national prominence in the 1960s following the publication of best-selling books The Electric Kool-Aid Acid Test (a highly experimental account of Ken Kesey and the Merry Pranksters), The Right Stuff, and two collections of articles and essays, Radical Chic & Mau-Mauing the Flak Catchers and The Kandy-Kolored Tangerine-Flake Streamline Baby. His first novel, The Bonfire of the Vanities, published in 1987, was met with critical acclaim, became a commercial success, and was adapted as a major motion picture.

PEN America’s community of writers, journalists, and readers joins together to mourn the passing of an icon and to send our deepest condolences to Shelia, Alexandra, and Tommy Wolfe.