Tiger Heads All the Way Down

This essay was written by 2020 Emerging Voices Fellow Claire Lin at the culmination of the fellowship. 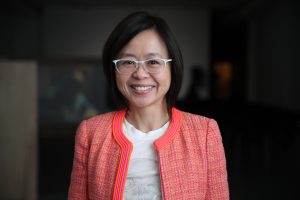 The strikeout question came last in the interview. I panicked as four judges around the conference table waited. The poet began twisting her hair and the regional director’s smile froze. As the clock ticked, the shelves around the small room of PEN America’s Los Angeles office, loaded with books by past Emerging Voices Fellows, seemed to lean towards me. I thought I would skate by on soft-ball questions: Your project? (A short story collection.) Writing routines? (Meditation before writing.) How do you participate in the literary community? (Attend readings, organize writing groups.) Then the program manager—who would turn out to be a mother hen at heart but looked like a drill sergeant whose spiky hair could cut—threw me a curve ball.

“In the recommendation letter, your writing professor said that you failed to get into his class the first time. How did you get in the second time?” she asked, her eyes glinting as if she had spotted a rookie who played hooky.

My mind raced through the fuck-ups that might have led to this question: Maybe the professor mixed me up with someone else? Maybe the judge mis-remembered the letter? I only knew that, no, I had not forgotten about a rejection that never happened.

Yet, I couldn’t possibly confess, because if I did, what else in the letter might I call into question? That I was destined to become the first Taiwanese to win the Nobel Prize in Literature?

“Ugh…it’s like they say…” I rummaged my brain and pulled out the first cliché. “…Kill your darlings…” As the regional director’s smile thawed and the poet’s death grip relaxed, I began to believe myself. “You see, I finally cut what I clung to and wrote a better story!”

I went home shaken. Not for the lie—after all, the very writing professor in question liked to say that lying is the prerogative of a fiction writer—but the misrepresentation clashed with my long-held self-identity. I had thought of myself as an ace-it-or-ax-it kind of gal. The Old Man Who Persisted to Move a Mountain? That’s a Chinese fable for teachable children. Me? I had known that I had a tiger’s head and a snake’s tail since I was seven.

Even before then I had suspected that I had the monstrous trait that seemed to run in my family. “Tiger head, snake tail,” Grandma would tsk-tsk about one person or another who had started something with a bang and ended it with a whimper. Then came the confirmation.

A few nights before my birthday, I had worried myself awake that no one—least of all he—would come to my party. I was in love with the Ping Pong Hunk and suspected that he loved me not. He was the captain of the school team, with his short shorts hugging his behind just so while he wielded the paddle the color of my bleeding heart. As I lay sleepless, an idea struck me. Maybe the Winter Olympics on TV inspired the idea: I was to choreograph a dance and enlist a few girls to perform at the party. Heck, I’d even include the girl who I suspected to be the hunk’s true love to entice him so he would realize my genius and worthiness of love.

The next day, as soon as I opened my mouth to describe the dance to the three girls (including her) whom I bribed with Grandma’s angel cake, the vision that was so inevitable the night before shriveled up like a dead squirrel. What I managed to get the girls to do looked like a parade of zombie rodents.

At home, I tossed the cake pan in the sink, waking Grandma dozing in the rattan chair. Her left hand automatically advanced her Buddhist prayer beads like a prodded donkey and her right hand resumed fanning her sweaty bosom vigorously.

I didn’t see my family as creative, and the only two Chinese myths that remotely touched on creation were not instructive. On one side of Grandma’s fan was an illustration of the goddess Nuwa making humans out of yellow clay, like an afterthought, after she slayed the dragon and propped up heaven with the legs she chopped off of a giant turtle. On the other side was Pangu, a ghoul, who did nothing but let his body rot, and his left eye became the sun, right eye the moon, four limbs the earth’s axes, and, wait for it, the mites on his body became the black-haired people, my ancestors.

So I looked far for what it meant to create, and the farthest person I knew lived in Ohio.

“Tell me the story again,” I said when my aunt called from the university a Pacific Ocean plus 3500 kilometers away, where she went to study and was promptly converted to Christianity before the first lonely winter by a church filled with Taiwanese expatriates.

I heard the soft thud of a leather-bound book hitting her table and her fingers ruffling onion skin papers.

“And God said, let there be light, and there was light. The first day.”

“Let there be a dome in the midst of the waters, …the second day.”

And so it went till God banged out the whole world.

That didn’t feel at all like my painful first attempt to create. I didn’t have the vocabulary then, but God did not go through a million revisions, mental breakdowns, or suicidal self-doubts, not even a second thought when the angels whispered, Maybe you shouldn’t use the left-over rib to make a whole other human?

Surely, if my idea looked rubbish right off the bat, it must be a rubbish idea.

Worse, maybe I was rubbish.

“We’ll see the dance on your birthday?” Grandma asked without opening her eyes.

“I changed my mind,” I said and turned the TV to the figure skaters that appear on screen already flawless.

The Emerging Voices Fellowship did not turn me into the Old Man Who Moved the Mountain. Before, I thought the hardest thing was to decide to pursue writing, like standing a far distance from a painting in a museum, say a late Mondrian with grids of red, yellow, or blue on white canvas, and thinking I could do that if only I would pick up the paint brush. The more writers I met through the program, the more I understand that after the hardest thing comes the harder.

“Have you ever thought of quitting?” I asked Charles Yu, my program mentor, on a Skype call, my tiger head cowering and my snake tail writhing to run away.

From the tiny box on screen, Charlie returned a pained smile, like a Zen master indulging a clueless young monk.

“During the long years writing my last book,” he said.

I did not like that at all. “Four books and you considered quitting?”

I wanted his assurance that there would be nirvana at the end of the unpublished tunnel.

“And you?” he returned the question the way a Zen master always does.

It was absurd and egotistic to wallow amidst a pandemic, but when the daily death count exceeded the daily word count, the sentences came out congested as if I had a symptom of infection, axing it seemed the more comforting option, like a childhood habit.

At the botanical garden where I pondered giving up, the turtles climbed out of the murky water and stacked on top of each other, three, four shells high like a Cirque du Soleil orgy. I remembered another creation myth, this one whose origin was so obscure that it has its own creation myth. One version: after Bertrand Russel finished a lecture on astronomy, an old lady said, “Rubbish. The world is really a flat plate supported on the back of a giant tortoise.” Russel asked, “But what is the tortoise standing on?” “Very clever, young man,” the old lady said, “But it’s turtles all the way down!”

Some stories about ourselves are like that. You continue to believe them long after you forgot when the first turtle climbed out of the water.

As it turned out, a few days after the interview, Ms. Drill-Sergeant-Mother-Hen emailed that I didn’t make the cut.

“You need to cut your darlings,” she essentially wrote. “The judges thought your mini-essays too overwhelming.”

Say what? Didn’t I make sure to be at least two words under the limit of every single one of the ten questions?

“I hope you’ll reapply next year,” she signed off.

I didn’t know that the learning began then. Fail and do it again. The writers I would meet when I finally got in the program do this all the time. I certainly never could have known that, a year later, the pandemic would hit just after the program started, and I would be grateful to have the support of four other fellows, the only people I saw during the lockdown, on screen, and to receive a call from the regional director, who took time between Zoom calls and negotiating to borrow playgrounds from emptied schools for her kid to ask, “Are you writing?”

Bullshit that God created the world in seven days without making a mess first. The world looks to me very much in ongoing revision.

The writers showed me why they keep going: to transform (Alex Espinoza), to discover (Ruth Ozeki), to play (Aimee Bender), and to innovate (Charlie Yu). In addition to these better-known names are the alumni who persist for the love and hard fun of writing.

My snake tail itches. I may not know how to finish but I do know how to start. If I start again and again, maybe my story will be tiger heads all the way down.

The Poetics of Sovereignty: Embracing Self-Determination on the Page

The Path to Remembering