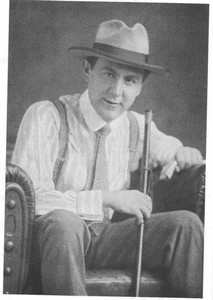 Stephan Delbos & Tereza Novická are the recipients of a 2015 PEN/Heim Translation Fund Grant for their translation of The Absolute Gravedigger, a collection of poems by Vítězslav Nezval. Read an excerpt of the translation here.

For anyone with even a passing knowledge of Czech poetry, Vítězslav Nezval (1900–1958) looms above the hundred-spired horizon. One of the most prolific poets of his generation, he dazzled even his closest contemporaries with his linguistic facility and uncanny ingenuity. Over his long career, he mastered several styles, including the playful Poetism of the 1920s and the deeply cerebral Surrealism of the 1930s. He was one of the main contacts for André Breton, Louis Aragon, and other French surrealists on their visits to Prague before and after 1934, the year they approved the foundation of The Czechoslovak Surrealist Group, the only official surrealist group outside Paris. Nezval’s collection Prague with Fingers of Rain, originally published in 1936 and published in a selected translation by Ewald Osers in 2009, shows Nezval at the height of his powers, claiming the role of interlocutor for Prague while unbuttoning the vest of reality to reveal surrealist imagery and energetic possibility in the city and its literature. One does not read these poems in Prague and remain uninspired.

But Nezval’s next collection, not yet translated into English, shows an even sharper focus of the poet’s surrealist ommatidia and his facility in a variety of forms, from long-limbed, imaginative free-verse narratives to short, formally rhymed meditations in quatrains, to prose and even a style of painting known as decalcomania. The Absolute Gravedigger (1937) is dazzling. Nezval’s musicality and imagery evince the restrainedly wild combination of absolute freedom and formal perfection. His syntax is taut; the line breaks, especially in the shorter lyric poems, slice the language into fragments that float in the mind with open-ended meaning and the multiplicity of readings Nezval allows to develop. The content of the poems goes in directions that are at first unimaginable but continue to evolve unexpectedly until they resolve or dissolve. Like electron clouds, these poems have a form within which seemingly chaotic energy reigns. The chaos is only an illusion, however; Nezval’s language is under absolute control, allowing him to reach into the colorful clouds of surrealist uncertainty and form shapes we recognize, though never expected to see.

If the formal inventiveness and imagination of The Absolute Gravedigger had not inspired our attempt at translation, the themes and topics of the poems themselves—life, love, surrealism, art, psychology, beauty, the uncanny, reality, death, politics, and Charlie Chaplin moustaches—which were inspired by Nezval’s experience of the years leading up to the infamous Munich Agreement and the Nazi annexation of Czechoslovakia, and informed by his own Communist (and therefore anti-Fascist) sympathies, were equally alluring as works of literature and as cultural-historical artifacts. Plus, we really dug the gravedigger.

These poems feel contemporary. Or let’s say we feel them contemporarily. We have been thrilled and confounded by the innovative and inspiring mind of Vítězslav Nezval, and hope our translation will help this vital poet of Prague find the international audience he deserves.

The Absolute Gravedigger is forthcoming from Twisted Spoon Press.

Tereza Novická, a native of San Francisco, moved to the Czech Republic in 2000. Currently a student in the American Literature graduate program at Charles University in Prague, she also serves as assistant director for the annual Prague Microfestival. She has translated a number of Czech and Slovak poets into English, including Ondřej Buddeus, Jan Těsnohlídek, Sylva Fischerová, Lenka Daňhelová, Martin Skýpala, Vlado Šimek, and Pavel Novotný.

Stephan Delbos is a New England-born writer living in Prague, where he teaches at Charles University and Anglo-American University. His poetry, essays, and translations have been published internationally. He is the editor of From a Terrace in Prague: A Prague Poetry Anthology (Litteraria Pragensia, 2011). His collection of visual poems, “Bagatelles for Typewriter,” was exhibited at Prague’s ArtSpace Gallery in 2012. His play, Chetty’s Lullaby, about jazz trumpeter Chet Baker, was produced in San Francisco. He is a founding editor of B O D Y.

Vítězslav Nezval (1900-1958) was perhaps the most prolific writer in Prague during the 1920s and ’30s. An original member of the avant-garde group of artists Devetsil (Nine Forces), he was a founding figure of the Poetist movement. His output consists of a number of poetry collections, experimental plays and novels, memoirs, essays, and translations. Nezval frequently traveled to Paris, engaging with the French surrealists. Forging a friendship with André Breton and Paul Eluard, he was instrumental in founding The Surrealist Group of Czechoslovakia in 1934.