The Selected Poems of Edoardo Sanguineti 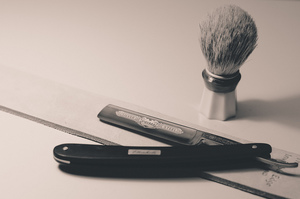 August 1st (a Sunday), everyone in Spandau for the afternoon, with Bisinger
and his friend, a girl from Munich (or around Munich): (a student of architecture
who makes us explore centuries of bastions and bricks):
on our guided tour
we take in, besides hedgerows of nettles, the ruins of giftgaslaboratorien, which were
operative in the lagers: broken pipes, nests of mice (and half-smashed
plaster casts of the horses of the Brandenburg Gate):
(from the haven
of a beer hall, where they pour green froth in a glass, there drifts the divine
music of coins cascading from a slot machine):

“I shave half your beard today”

I shave half your beard today in the bathroom mirror (and often go
against the grain):
I’m no virtuoso with shaving cream and a razor, as
you can tell, see, from extensive evidence, the stubborn nicks
on my face: (yet all in all, my son, I get by well enough, I think):
(and now a few last tips: shower with hot water, shampoo with antidandruff
shampoo, watch your penmanship, keep an eye on your waistline
and wallet, tie your tie with care):
the banal, usually, is the hard part:

TOPIC:
you have become a grandfather: briefly explain your impressions, your
feelings, etc.:
ANSWER:
when I first saw her, the afternoon of the 9th,
she was sound asleep on her stomach: (the usual arms half stretched out, her hands
making half fists): but when she woke up again, silently, after a while (she’s taciturn
by nature, I think), she looked me over with great concern (almost scared,
poor thing), knitting her colorless hint of a brow:
(but then,
in an instant, I calmed her down with the practiced effects (and affections) of my voice,
tested on her father what now seems a century ago):
so sometimes, later on,
I can say that’s how I made my presence felt, on the first take, with my serene,
unscathed eyes, to the offspring of my same eyes, pierced with delicate patience,
in a hereditary heterosexual micro-face, excessive eyes: (that hold fast):

“carve them in block letters”

carve them in block letters, readers of my will (I’m talking to my students,
my hypocrite children, the pro-proletariats who resemble me to a T, as countless
now as grains of sand in my empty desert): these words of mine on my tomb,
do it with spit, swishing a finger in your mouths: (just as I’m swishing a finger
around the excessive abscesses of my icy gums):
my life, I lapped it up:

the rooms you live in now (now, I mean, that you live in them, all and utterly
alone at this point) are full of music: (of your music, I mean): (of you,
who have been music, for me, for everyone, for years and years, here):
(I imagine a kind
of musique d’ameublement, as they used to say, de tapisserie): (and your old telegram,
which read, I think, “THANKS,” and nothing else, will have arrived for you
this time): (and outside, flowers are flowering, Talia told me, yesterday):
(and
sure, you will have immediately verified that there’s no god, no goddess, nowhere):
(not even a mini-Camena of music, I mean nothing): (and I picture you a little more at ease,
this way, I don’t know):
(but you knew, then, for immortals, it’s written in stone,
it is not (would not be, I mean, anyways) licit to weep over mortals, not ever):
(yet if that’s the reason, then we’ll take care of it, here, now, fortunately, perforce):

Edoardo Sanguineti (1930-2010) is widely considered one of the most important Italian poets of the postwar period. His critical and creative output is closely linked to the New Vanguard movement of the 1960s. His books of poetry include Segnalibro. Poesie 1951-1981, Il Gatto Lupesco. Poesie 1982-2001, and Mikrokosmos. Poesie 1951-2004. He is also the author of several plays, novels, librettos, and books of criticism.

Will Schutt is the author of Westerly, winner of the 2012 Yale Series of Younger Poets Prize. His translations of Italian poetry and short fiction have previously appeared in A Public Space, Agni, Circumference, FIELD, and Poetry Northwest. He currently lives in Baltimore, Maryland.