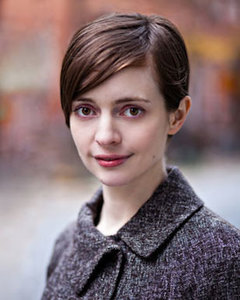 The PEN Ten is PEN America’s biweekly interview series. This week I talked to Emily St. John Mandel. Emily and I sneak away to the occasional dinner at Le Veau d’Or on the Upper East Side whenever we can, and she and I share a friendship that is based on a mutual appreciation for both what has endured and what has vanished from this world. Emily’s new novel, Station Eleven, an immediate New York Times best-seller and recently shortlisted for the National Book Award, asks the question of what we as human beings would most want to remember.

When did being a writer begin to inform your sense of identity?
When I was twenty-two and living in the wrong city. It was my third city in twelve months. I was recently heartbroken, I didn’t speak the right language and the locals were unpleasant about it, the only job I could find involved unloading a truck before dawn every morning, the pay at said job was such that I frequently ran out of food the day before payday, and the temperature hovered consistently around minus 20 degrees Centigrade. I’d been a dancer all my life but didn’t really want to dance anymore. I spent a great deal of time scheming desperately to get back to New York, where I’d lived for five blissful months during the previous year. I’d always written as a hobby, but during that period it occurred to me that writing was something that could replace dance in my life, and also I sensed that immersing myself in a large-scale project might be helpful in retaining my sanity until I could escape to a new city. I started writing my first novel—eventually published as Last Night in Montreal—in a café around the corner from my apartment, and gradually began to think of myself as a writer around that time. I sometimes used to describe my time in Montreal as an unmitigated catastrophe, but this was flippant of me, and also untrue. All of it was interesting, and I got a novel out of it. I’m grateful for my time there.

Whose work would you like to steal without attribution or consequences?
None. The thought makes me queasy. But if I could steal anyone’s talent, as opposed to their actual work, it would be nice to be magically imbued with Saul Bellow’s prose style. His best work was breathtaking.

Where is your favorite place to write?
In my home office. It’s my favorite room in the world, and I miss it when I’m away from it during the day. The desk and bookshelves and filing cabinets are lined up on one side of the room. The other side of the room is empty, because that wall is almost entirely covered by a tapestry of mysterious provenance. I bought it in my neighborhood from a guy who said he’d bought it in Iran. It looks like an inexpert copy of a very famous tapestry that’s hung in a Paris museum since the 1880s.

Have you ever been arrested? Care to discuss?
I’ve never been arrested. I did watch my mother get arrested at a logging blockade when I was fourteen, and then I spent my fifteenth birthday in the Supreme Court of British Columbia, watching her mass trial on criminal contempt of court charges for defying the injunction to clear the logging road. My mother and I live on opposite sides of an international border now and she needs to keep her record clean in order to continue to visit me, which I fear has somewhat cramped her protest style.

Obsessions are influences—what are yours?
I’m obsessed with music, also travel. I haven’t been to nearly as many places as I’d like. I’m often asked in interviews which writers have influenced me, and of course there are some who have influenced me a great deal, but I think I’ve been equally influenced by music. I wrote most of Station Eleven while listening to Max Richter, and I believe that the tone of that music deeply pervades the book.

What’s the most daring thing you’ve ever put into words?
Something too private to repeat here.

While the notion of the public intellectual has fallen out of fashion, do you believe writers have a collective purpose?
I don’t think so. I think we’re all just doing our best to make sense of the world. You could call that our collective purpose, but isn’t that more or less what everyone else is doing too?

What book would you send to the leader of a government that imprisons writers?
I have a hard time imagining that the leader of such a government would be particularly receptive to literature. But if I could distribute a book to the population, perhaps it would be Azar Nafisi’s masterpiece, Reading Lolita in Tehran. It offers both a mode of escape—literature—and a model of resilience in the face of oppression.

Where is the line between observation and surveillance?
I think it’s largely a matter of intent. If I overhear an interesting conversation in a cafe, and I write it down in my notebook in order to use it for a novel later, that seems to me to be a fairly innocent act of observation, so long as no one can discern the identity of the speakers in my work. On the other hand, if I sat in the same cafe, overheard the same conversation, and wrote it down in the same notebook, but this time I did so in order to report back to my employer and add the transcript to a secret file, that’s something quite different.