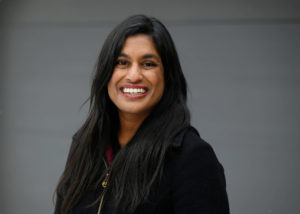 1. You began writing The Immortal King Rao in 2009. What does your creative process look like? How did you maintain momentum?
Oof. The phrase “creative process” suggests something methodical about it all—which this wasn’t. I started the novel while in graduate school at the Iowa Writers’ Workshop and spent about a year-and-a-half working on it more-or-less full-time. Then, in 2010, I finished graduate school and returned to working full-time at The Wall Street Journal—which had given me a two-year leave of absence to go to grad school. Once I got back to The Journal, I had to fit in writing wherever I could: Many weekend days, I’d wake up, eat a taco, and write all day long. Then, in 2015, my husband and I had our son, and I couldn’t write on weekends anymore.

It was around that time that I started freelancing, writing for magazines; that work was time-consuming, but it did sometimes let me, between deadlines, spend days or weeks at a time on the novel. I’d be lying if I said I worked consistently during these past 13 years, though. There were times when years passed. The thing that kept me going was knowing, every time I finished a draft, that it was definitely better than the previous draft. That made me feel like the next draft would definitely be better than this one.

2. What is one book or piece of writing you love that readers might not know about?
When I was in graduate school, the classmate whose work I most admired—and this was true for a lot of us—was a writer named Gerardo Herrera, whose stories were just mind-blowingly and brilliantly original. In Issue 61 of McSweeney’s, a couple of years ago, Herrera published a story called “A Non-Sprinklered Building” that astonished me and broke my heart; it’s narrated by a woman who has gotten caught in a fire, in what seem to be the last moments of her life. It’s an excerpt from a novel he’s been working on since graduate school, which we’ve all been anticipating with such excitement; the novel, I’ve heard, is almost done.

3. What was one of the most surprising things you learned—about the craft of writing, the questions you sought to explore in your novel, about the characters in the novel, yourself, etc.—while writing your book?
The entire time that I was working on this novel—and I think this is true for many writers, especially those working on our first books—I was not at all convinced that I would ever finish it. So the biggest surprise for me has come now, as the book has gone out in the world and gotten a positive reception: I was able to do it; I did it.

4. Some writers write with a specific reader in mind. This may be an individual, a group of people, a memory. Who, or what, did you envision as the reader when you were writing your novel?
My husband, the writer Andrew Altschul, who is my best and most helpful reader.

5. You worked as a Wall Street Journal technology reporter and as the business editor for The New Yorker. In what ways did you experience in these positions inform the novel?
They informed it profoundly. I realized, while working as a business reporter, that these people who we sometimes think of as all-powerful—CEOs of major tech companies—actually face intense pressures and constraints: from investors, especially. I think writing characters successfully generally requires placing them under pressure, making clear what constraints they experience—and I was able to draw on my understanding of the job of a tech CEO, from being a tech reporter, to show what that might look and feel like for someone like King Rao, my main character, who founds and runs a huge tech corporation.

There were more practical ways in which being a journalist was helpful, too: Throughout the writing of this novel, I’ve continued to work full-time as a journalist—mostly writing for magazines — and I’ve often looked for assignments that would teach me something I needed to know for the novel’s sake (while also being interesting in their own right). I profiled Sam Altman, the CEO of an AI lab called OpenAI, for California Sunday Magazine; I covered an AI startup called Element AI for Fortune.

“The entire time that I was working on this novel—and I think this is true for many writers, especially those working on our first books—I was not at all convinced that I would ever finish it.”

6. What is the most daring thing you’ve ever put into words? Have you ever written something you wish you could take back?
I recently used an AI text-completion tool called GPT-3 to write—with help—an essay, “Ghosts,” about losing my sister to cancer 21 years ago. It was a subject I’d struggled to broach in my writing. The problem was that I couldn’t figure out how to write about it accurately. The way GPT-3 works is that you can give it some words as an input, and it continues the thought for you. So I started typing some words about it and asked GPT-3 to fill in the rest. Relinquishing my own narrative authority to an algorithm felt very risky, both emotionally and intellectually: What would it mean to let a machine write part of my own story? What would it mean if we began relying on machines to do this, in general? It was also a fascinating, and even moving, experience for me.

7. What advice do you have for young writers?
Persist, even when it doesn’t feel like it’s working. I’ll pass along some advice from the writer Elizabeth McCracken, who led the novel workshop at the Iowa Writers’ Workshop in which I first shared a draft of this novel and wrote this in her feedback letter for me about an early draft: “Write, write, write. Then write some more.” Also, read.

8. The writer Karan Mahajan calls The Immortal King Rao “three great novels in one.” How did you determine which structure to choose for this particular type of a narrative? Did it remain the same or did it change over the course of revision? 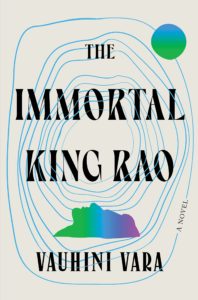 That’s right, there are three storylines: King Rao’s childhood on a coconut grove in South India; the rise of Coconut, the computer company that King starts after immigrating to the U.S.; and the story of King’s daughter, Athena — who has been imprisoned for allegedly being involved in the death of her father. For the longest time, there was no Athena. I created a narrative voice for the novel to tell King’s story, but, to be honest, I didn’t really know whose voice it was. People would read drafts of the novel and ask, like, Is this voice human? Does it have a gender? It was only in the final years of the project that I figured out who was talking: Athena, King’s daughter, who has been implanted with technology that allows her to access her father’s consciousness. Once I figured that out, I had to write Athena’s own story. That was the last piece. Then the book started to come together.

“Persist, even when it doesn’t feel like it’s working.”

9. Ideas have consequences, with the ability to restructure societies, change the course of history, and transform the lives of people who have them. King Rao’s technological idea in the novel, the Coconut, is a prime example. As a writer, in what ways is the character of King Rao an idea itself while also being a character at the same time? Can a character be both?
We don’t talk a lot in creative writing programs about how writing functions on a symbolic or idea-based level; I think that often presents itself subconsciously for a writer—and for a reader, too—which makes it hard to explicitly teach. But I was thinking a lot about ideas in shaping this novel. I wanted King to be both a fully realized character and a representation of human ambition in its most intense form. That was true, by the way, for many of the characters in the novel. I started writing this novel after having read Moby Dick for the first time, and I think I was quite influenced by how Herman Melville was able, in that novel, to get at ambition and global capitalism — themes that interested me, as well—while also doing all the other things a novel needs to do: craft interesting characters, put a plot in motion, and so on.

10. If you had to do something differently as a child or teenager to become a better writer as an adult, what would you do?
My reading diet as a child and teenager mostly included Archie comics and the Sweet Valley High and Babysitters Club series. I loved those books passionately. But I would have learned a lot if I’d read more widely then.

Vauhini Vara is the author of The Immortal King Rao, an American Booksellers Association Indies Introduce selection, which has appeared on lists of most-anticipated books from New York, The Observer, The Times of India, and elsewhere. Her fiction has been honored by the Rona Jaffe Foundation, the O. Henry Prize, and the Yaddo and MacDowell residencies. She has also worked as a journalist and an editor, for the New Yorker, the New York Times Magazine, and the Atlantic, among others.

The PEN Ten: An Interview with Marwa Helal

The PEN Ten: An Interview with Chantal V. Johnson