The Meanings of Yellow 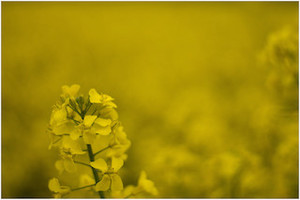 The following piece first appeared in Glossolalia: Women Writing Brazil, the second issue of PEN America’s translation journal. Glossolalia advocates for writers with limited access to the global reading community. By publishing works from lesser-translated languages, Glossolalia connects storytellers to audiences eager for a vivid, mind-expanding look at experiences unlike their own.

“The Meanings of Yellow” by Maria Esther Maciel was translated by Daniel Hahn from the original Portugese.

Last night I had a bad dream. It began with a color: yellow. I clearly remember its stridency in the dream, the way it outshone every other color. It was a yellow that had something of Turner’s paintings about it, most specifically the one the artist calls The Angel Standing in the Sun. It had something of Van Gogh about it, too.

Yellow has always caused me a certain amount of discomfort, perhaps because of its relation to sickness, to fear and despair. It also evokes power and the riches of gold, though neither of these things impresses me. And as much as it’s the color of gold, it’s the color of urine, too. And the color of the juices and secretions of the body, and jaundice. But the color of various citrus fruits—my favorites. João Cabral de Melo Neto wrote a lovely poem, The Kingdoms of Yellow, pointing at the paradoxes of the color’s various shades, which range from dazzling to sallow. Goethe looked at yellow and saw the passion of light. Guimarães Rosa saw joy. And how could we forget Mango Yellow, the movie by Cláudio Assis, which turned yellow into an implied character?

Jorge Luis Borges’s favourite color was yellow. On a talk about blindness, delivered in 1977 and subsequently included in his book Seven Nights, he recounted how, as a child, he used to like looking at the golden fur of tigers, and, for this reason, he had come to develop a fascination for the color of “wild yellow.” It’s a curious fact that yellow was one of the few colors the Argentine writer went on being able to see even after he’d almost completely lost his sight. He uses this in his 1972 poem, The Gold of the Tigers, in which he shows how the “powerful tiger” of his childhood ended up being immortalized for him as a color. I recall a few lines: “Over the years I have been left / By the other beautiful colors / And all that now remain to me / Are the vague light, the inextricable dark / And the gold from the beginning.”

Another Borges poem to evoke the color yellow is The Blind Man, in which the writer describes the slow process of blindness that brought him, in old age, back to poetry—after many years devoted mostly to prose. This was because, faced in his blindness with the impossibility of reading or writing, he began to compose his texts in his head before dictating them to somebody. And poetry, he said, was always easier to memorize because of its rhythm and its concision. One stanza of the poem reads: “ . . . In the garden I inhale / My friends, a gloomy rose of the shadows. / Now all that remain are the yellow shapes / And I can see only to see nightmares.”

And here I return to the nightmare with which I began. I remember that Borges gave a lecture on this subject, too, likewise included in the volume Seven Nights. In it he reports that his worst nightmares were those in which he saw himself reflected in a mirror, with a mask over his face. He also explains that the Latin word, incubus, refers to the demon creature (or night-mare, as suggested by the English) that weighs heavily onto the chest of the sleeper. One can follow other etymological routes, however, by which the term conveys the notion of a “night fiction.” In other words: Notwithstanding the weight that defines it, a nightmare never stops being an invention of the sleeper’s own.

I haven’t told you the rest of last night’s bad dream. It can wait. Or maybe I should just leave it as it is, no more than the memory of a color.

Maria Esther Maciel is a poet, novelist, essayist, and professor of literary theory and comparative literature at the Federal University of Minas Gerais (UFMG), Brazil. Her publications include Triz (1999), O Livro de Zenóbia (2004), A Memória das Coisas (2004), O Livro dos Nomes (2008), A Vida ao Redor (2014), and Literatura e Animalidade (2016). She is working on a new novel about the life of St. Hildegard of Bingen.

Daniel Hahn is an award-winning writer, editor, and translator with about 50 books to his name. His translations (from Spanish, Portuguese, and French) include fiction from Europe, Africa, and the Americas, and nonfiction by writers ranging from Portuguese Nobel laureate José Saramago to Brazilian footballer Pelé. He is a past chair of the UK Translators Association and the Society of Authors, and former National Programme Director of the British Centre for Literary Translation.