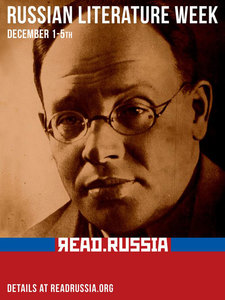 PEN American Center is proud to have the following members participating in events:

Tuesday, December 2
Marian Schwartz, who was awarded the Read Russia Prize in Moscow this past September for her translation of Leonid Yuzefovich’s Harlequin’s Costume, will join Ross Ufberg, translator from Polish and Russian and publisher of New Vessel Press, and PEN Translation Committee member Ronald Meyer, who like Schwartz is translating a volume of Alexander Solzhenitsyn’s The Red Wheel cycle as part of the Solzhenitsyn Initiative, for a discussion of “Then and Now: Classics v. Contemporary Literature.” (Harriman Institute, Columbia University, 12pm, free admission)

Wednesday, December 3
Marian Schwartz and fellow Pen Translation Committee member Antonina Bouis, translator of Malevich, Sakharov, Tolstaya and Yevtushenko, to name just a few of her many authors, will join publisher and translator Jeff Parker for a conversation on “Publishing and Politics,” namely, the way the bigger picture (international affairs, state policies) can influence what gets translated, what gets published—and when. Moderated by author, translator and critic Liesl Schillinger. Reception to follow. (Book Culture, 536 W. 112 St., 7pm, free admission)

To RSVP, and for full details on events and venues, including film screenings and online events not listed above, visit the Read Russia website.