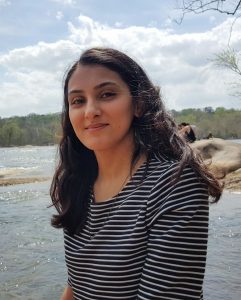 Today, we share Sidra Sheikh’s story on being a Muslim American. The piece is Sheikh’s response to The M Word’s questionnaire.

I identify as a Muslim largely because Islamic values are what I was raised on, and faith in Allah kept my family together in the most difficult times. Now, even though I have a complicated relationship with the religion in terms of day-to-day practices, its teachings on social justice and treating others and oneself with kindness are a large part of who I am and my career in working with young people.

To be a Muslim in America is to hide your faith in some settings and elevating it in others, which is much easier to do as a woman without a hijab. To be Muslim in America is also to worry about the safety of your hijabi mother and your South Asian brother who can’t help but grow a beard. It’s worrying on major holidays and going to mosques; it’s worrying riding public transit and planes; it’s worrying when someone learns your name; it’s defending when someone passes judgement thinking it is okay to do so when you don’t wear a hijab.

I’m trying to learn from leaders of the Black Lives Matter movement—to be unapologetically Muslim while standing for the injustices against my community and others.