A Conversation on Writing, Disability, and Alexandre Jollien 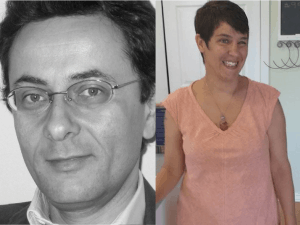 Tonight at the PEN World Voices Festival of International Literature, author, translator, and publisher Michael Eskin will reflect on his translation of Alexandre Jollien’s In Praise of Weakness at the event “Playing with Fire: Theater in Translation as Resistance.” In advance of this event, Eskin conducted the following interview with poet and biographer Jennifer Bartlett on Jollien’s work, on writing, and on disability activism. Catch Eskin tonight at this free event, and browse the PEN World Festival’s schedule for more exciting events happening this week.

Michael Eskin: When we first started our conversation about Alexandre Jollien’s In Prasie of Weakness not too long ago—even before you had a chance to read In Praise of Weakness—you suspected that, as a disability activist, you might “have a very different view of the world” than Alexandre, because you feared ­that he might be putting “a negative, typical view of disabled people into the world.” What do you mean exactly by “negative, typical view of disabled people”? And how has your view of Alexandre’s approach to disability changed now that you have read In Praise of Weakness and had time to reflect on it?

Jennifer Bartlett: When I first came into contact with In Praise Of Weakness, I was taken with the title. In the United States, at least, the typical view of disabilities is that they are a form of weakness and something to be avoided, fixed, or cured. It is very difficult for disabled writers to get published in the United States, and when they do get published, the stories are always about someone who did something miraculous or “overcame” their disability in some way.

I think Alexandre’s approach very much matches my own. He appears, as I do, to simply view his disability as a neutral, even positive, aspect of his life.

Eskin: That’s so interesting, as there seems to be a paradox at play here: On the one hand, our culture—U.S. culture—seems to valorize, above all, diversity, inclusion, and inclusiveness, whereby whoever and whatever one happens to be, identify, or be identified as, ought to be accepted, respected, and celebrated; on the other hand, there seems to be a strong drive toward certain standards of conformity pertaining to health, appearance, speech, behavior, and so on. Hence, as you put it, the typical—and, dare I say, duplicitous?—view of disabilities in the United States as forms of weakness and things to be avoided, fixed, or cured.

I assume that this is something you endeavor to counteract in your own work as a poet, writer, and disability activist? Could Jollien’s book be engaged as a “weapon” against our society’s duplicity and hypocrisy?

Bartlett: Yes. I definitely think that Jollien’s book could be a wonderful tool in unpacking this duplicity. For starters, as I mentioned before, disabled people rarely get a chance to tell their stories in the U.S. publishing world. Jollien’s translation adds to that chorus. One thing I really admire is how matter-of-fact he is about the circumstances of his life. He also highlights the fact that having a disability can lead to positive outcomes in that one can be more compassionate—which is NOT to glorify disabled people.

My life and work continuously function to break apart the typical views of disability. This is partly not my fault nor first choice. I feel that just in order to live a “typical” life, I have to press against standards every day. People have expressed surprise that I participate in even the most mundane aspects of life: holding a job, mothering, being married, and so on. Just by being in public spaces, I am testing people’s perceptions. But this is changing. My work—poetry and so on—is a bit more radical.

Eskin: What do you mean exactly when you say that “this is partly not my fault nor first choice” in connection with undermining typical views on disability? And could you give an example of your more radical work?

Bartlett: When I said that it’s not necessarily my first choice, what I mean is that from time to time, I wonder what it would be like to be an able-bodied person. I know it’s more complex than this, as people are judged according to all sorts of criteria, but it is interesting to think about what it would feel like to be on an equal footing with able-bodied people. I wonder, for example, about how successful I might have been as a high school teacher if I didn’t have to deal with employees’ and students’ preconceptions of my body. This came into play too when I experimented as an able-bodied woman on a dating website. I wrote an article about it in The New York Times. I got a lot of backlash from readers who assumed that I was condoning sexual assault. These readers missed the point of the article, which wasn’t to condone damaging behavior, but to experience the world through the eyes of an able-bodied woman.

Eskin: That is a truly fascinating and important topic: disability and sexuality. And it is so important because, as you so brilliantly lay out in the article, “Longing for the Male Gaze,” our society has so many more or less tacit prejudices regarding the disabled person’s libido. I thought that your dual experiment—posing as an able-bodied woman at first, and then conducting the same procedure as an explicitly disabled woman—was profoundly revealing. Reading your article, I didn’t know whether to be amused or taken aback by the fact that men’s behaviors toward you were so drastically different in each case—aggressive, condescending, bullying, and provocative in the former and inquisitive, understanding, and respectful in the latter—implicitly, because, as you seem to suggest, they no longer took you seriously as a sexual subject or potential sexual partner.

What I found most provocative and authentically raw in a way was your frank admission that you would actually rather be noticed, hit upon, and commented on in a sexually inappropriate manner by men than be treated as a sexual non-entity, “in the third person,” as you put it. Which is precisely what you seem to have gotten a lot of pushback on.

Bartlett: What I hoped for in my online experiment was exploration. Both exploration of my own sexuality and of the workings of typical people’s experiences. I didn’t have a hypothesis, really, but I knew that disability sexuality would be new to many people. What did I learn? One thing I learned was that with 20 percent of the U.S. population having a disability, it’s kind of shocking that people are surprised by disabled people inhabiting dating spaces!

Eskin: How does all this play into your understanding of Jollien’s notion of disability-as-weakness that deserves praise? What does it mean to be weak in this context? How, would you say, does Jollien’s In Praise of Weakness empower the disabled in particular—and, by extension, the able-bodied as well?

Bartlett: I think weakness (for me at least) is hard to digest within the context of disability. The issue is that in the United States, any form of weakness is disregarded and thought of as bad. I feel this particularly profoundly in gender issues and disability.

As a woman with cerebral palsy, I suffer from a great amount of physical pain. However, I have a tendency to keep this pain private because it feels like if I confess to any pain or (weakness), I am giving those who are prejudiced against me fodder. I really admire Jollien for being open about weakness, particularly as a man. But, I wonder if this concept functions differently in France.

Eskin: Given these cultural differences—and I am sure you’re right in pointing to them—what would you say do Jollien’s approach to disability and his praise of weakness have to teach us in the United States in particular, both the disabled and the able-bodied, given our own cultural idiosyncrasies, predicaments, and conditions? What would you say is the core “message” of his book?

Bartlett: I would say the core message of Jollien’s book is that life is really beautiful. No one body suffers more than the rest; we are all privy to suffering and beauty. Life isn’t about fitting into any one set of ideals—it’s so much more than that. Jollien’s experience can teach American audiences about gentleness in particular in the way that he interacts with his classmates and learns from them.

The PEN Ten with Behrouz Boochani