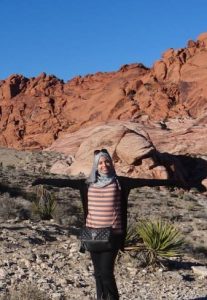 Today, we share Nadia Eldemerdash’s story on being a Muslim American. The piece is Eldemerdash’s response to The M Word’s questionnaire.

Yes. I was born into a Muslim family, and now as an adult Muslim woman I actively practice my religion, including wearing the hijab. I have also been lucky enough to go on Hajj (pilgrimage to Makkah).

Because I wear hijab, being Muslim in America is to be visible and to be hyperaware of that visibility. As a young adult, it can sometimes mean feeling like an outsider among your peers, because you don’t necessarily want to participate in a lot of the activities we associate with young adulthood in mainstream American culture. And I think we’re always a little worried that even the people who are our friends and allies have bought into the many negative stereotypes about Muslims and Islam, whether they’re aware of that or not. Overall, I wouldn’t trade it for anything. Every day, I make the choice to be Muslim, to wear hijab, and to stay true to my convictions, and I think that’s strengthened my faith in ways that I may never have experienced in a Muslim-majority country. I have also become very aware of the way language both reflects our attitudes and shapes them, and as a writer that’s been invaluable to me.

I feel like I have a big responsibility. When I go to work or meetings or interviews, 99 percent of the time I’m the only Muslim in the world. I would not be surprised if most of my coworkers and friends do not know another Muslim. It’s part of what has made me so hyperaware of myself and what people think when they see me. I seek to represent who Muslims really are through my day-to-day actions, through my work ethic, and how I treat others. I hope that in doing that, it’ll open others up to questioning biases they may not have even realized they have.