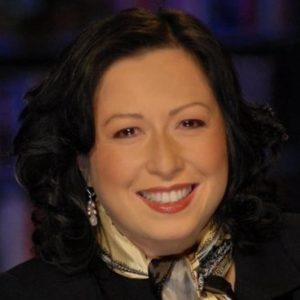 Selected Remembrances:
“The Maria we are privileged to call family and friend knew better than most the power of relationships, loyalty, faith, kindness, perseverance and a smile, even when a smile defied the darkness of the moment. Her notable professional contributions are part of the CBS Archives, but it is her magnificent human spirit that touched so many of us, that will stay with us forever.”
—Ingrid Ciprian-Matthews, Executive Vice President of Strategic Professional Development, CBS News [CBS News]

“I’ve gotten dozen[s] of messages from reporters at CBS News recalling how she worked diligently to get them to the network and how she continued working with them even long after they joined CBS.”
—Vladimir Duthiers, Correspondent, CBS News and CBS This Morning [Buzzfeed News]

“Decades of covering the news and championing diversity in the workplace were on Maria Mercader’s resume, but it was the indomitable smile she had for everyone while facing several bouts with cancer that inspired colleagues and friends of the veteran CBS News journalist.”
—Dinah Eng, freelance journalist [MarketWatch]

“That was her power, her loyal advocacy and her love. That she’s now left us makes me feel I have to work that much harder to make her proud from heaven — and I know she’s watching me all the time now and with a good glass of wine in her hand. She’ll be missed terribly but the outpouring of love for her around the world I see now is just a beautiful torrential testament to the love she poured into the world when she was with us.”
—Ramy Inocencio, Correspondent, CBS News Asia [Asian Journal]

“Maria Mercader was warmth and kindness. She invited me to CBS, hoping to open doors for a young, aspirational reporter. She supported Asian American journalists and I am grateful for her grace. She will be missed.”
—Christina Lee, Anchor/Reporter/Producer, Reuters [Twitter]

“If those of us on camera are the faces of CBS News, Maria Mercader was this organization’s heart, soul, and spirit. In a career that spanned more than three decades, Maria rose from page, to Emmy Award-winning producer, to top executive. She helped guide our coverage of some of the biggest stories of our times, from the September 11th attacks to the death of Princess Diana. But more important than what Maria achieved as a professional is who she was as a person: a friend and counselor, a confidante and mentor who gladly and generously shared her wisdom with the next generation of CBS News journalists. Maria taught all of us how to live life with joy no matter how difficult the challenge. For more than 20 years, she bravely fought cancer and related illnesses without an ounce of self pity. . . Our souls ache tonight, but we will always find joy each time we remember Maria Mercader’s many kind words and her ever-present smile.”
—Anthony Mason, Co-Anchor, CBS This Morning [CBS Evening News]

“An award-winning journalist, Maria worked on some of the biggest stories of our time, including 9/11 and the visit of Pope Francis to the United States. Tireless on the job, Maria was also kind and selfless in every sense turning each conversation towards you, asking you about your family’s health and well-being—this, as she battled health issues of her own, beating cancer. Maria danced her ways into our hearts, fitting for a lover of music and ballet. She was a fighter but also a friend, mentor, listener, and cheerleader. She saw CBS News as her family, and everyone here saw her as their angel. She leaves an emptiness in our newsroom, where she shared three decades of her own life as a woman dedicated to journalism, to excellence, to making us all better than we thought we could be.”
—Norah O’Donnell, Anchor, CBS Evening News [CBS Evening News]

“A hard hit to the heart, news longtime colleague and friend Maria Mercader died from coronavirus. A paragon of grit and grace, she embodied the best of the @CBSNews mission. Millions of Americans learned of the world through her efforts. Now our world is less with her loss. RIP.”
—Dan Rather, retired journalist and former evening news anchor [Twitter]

“She had an incredible drive and perseverance. I also saw her be a great patient advocate for other cancer patients and cancer survivors.”
—Dr. Valerie Rusch, Thoracic Surgeon, Memorial Sloan Kettering Cancer Center [CBS This Morning]

“Even more than her talents as a journalist, we will miss her indomitable spirit. Maria was part of all of our lives. Even when she was hospitalized — and she knew something was going on at CBS, she would call with counsel, encouragement, and would say ‘you can do this.’ I called Maria a ‘warrior,’ she was. Maria was a gift we cherished.”
—Susan Zirinsky, President and Senior Executive Producer, CBS News [CBS News]

Selected Work:
In tributes and remembrances, Mercader is credited with producing high-profile stories for CBS News, including the September 11th attacks, the death of Princess Diana, and Pope Francis’s visit to the United States. She is also noted as the producer of “The Little Engine That Could, Spam,” a CBS News Sunday Morning feature report on computer spam that won an Emmy Award for Business and Financial Reporting. Other than that, Mercader authored two pieces that live on CBS News’s website:

“The Lance Armstrong story saddens me.

“His story saddens me not because he doped and because he lied. I’m sad because Lance had to win at all costs: He wanted to be a champion. I do not understand. Isn’t beating metastatic cancer enough of a win?”

“I know that fighting cancer is war because I have been in battle not once, but twice. I have a team of 14 physicians and I have sat in doctors offices for hours and hours. I have had countless tests, invasive examinations, chemotherapy, radiation and several surgeries; I was even hospitalized for four months. Battling cancer can be a full time job. No one wants to hear those words, ‘you have cancer,’ but it is in that moment that you start the fight. When you want to live, there is no decision to be made. Fighting isn’t a choice. You just do it; it becomes as natural as breathing.”