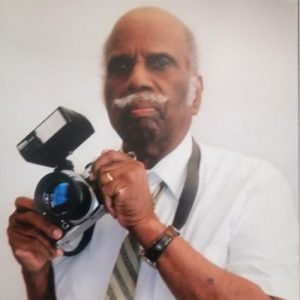 Selected Remembrances:
“Theodore Gaffney’s presence in the civil rights movement remains one of the most recognizable – even though he was always behind the scenes. Gaffney captured much of the historic events of the era as a photographer.”
—Kenya Evelyn, Breaking News Reporter, The Guardian [The Guardian]

“In his 92 years, Theodore Gaffney witnessed some of the most consequential moments in history.

“He served in the US Army during World War II. One of the first black photographers in the White House, he took photos of US Presidents Harry Truman, Dwight Eisenhower, John F. Kennedy and Lyndon B. Johnson, as well as Queen Elizabeth II.”
—Harmeet Kaur, Producer, CNN [CNN]

“He provided proof that black people are being assaulted at these protests. We’ve lost a tremendous wealth of knowledge who actually lived many of the things we are documenting.”
—Lopez Matthews, Digital Production Librarian, Howard University Libraries and the Moorland-Spingarn Research Center [The Guardian]

“He was interested in documenting the struggle of people of African descent here in the U.S. He would say, ‘If you don’t believe you can change things, you won’t know until you try.’”
—Maria Santos-Gaffney, wife of Theodore Gaffney [TIME]

“In the spring of 1961, Jet magazine asked Theodore Gaffney, a Washington freelance photographer, to travel with the Freedom Riders, a group of activists from across the country who planned to challenge segregation in the South by riding Greyhound and Trailways buses. . . He found himself risking his life and documenting one of the most tumultuous 48 hours in civil rights history.

“Gaffney’s own history helped make him the perfect person to chronicle the civil rights movement. He was the descendant of people who had been enslaved at a plantation near the town of Gaffney, S.C.”
—Ian Shapira, Enterprise Reporter, The Washington Post [The Washington Post]

“Gaffney ended up with a front-row seat to one of the most significant events of 20th-century American history. The Freedom Riders, who traveled the American South to challenge the segregation of buses and terminals, revealed American injustice to the world, charted a course of nonviolent action that would lead to the Civil Rights Act of 1964 and galvanized a new generation of civil rights leaders. Along the way, they were met by vicious mobs and eventually federal intervention. And Gaffney was there to capture it all.”
—TIME Staff [TIME Magazine]

The PEN Pod: On the Capitol Hill Insurrection and Conspiracy Treadmill with Suzanne Nossel

The PEN Ten: An Interview with Robert Jones Jr.

The @nytimes takes a look back at how "profound and prolonged trends affected the literary world" in 2020: https://nyti.ms/38wQ2AV.

Join us on 1/14 for an intimate and stimulating dialogue with PEN America's 2019-2020 Writing for Justice Fellows as they share their experience in the program and their achievements in the fields of literature and criminal justice. Free with RSVP: https://bit.ly/3pZPlWB.