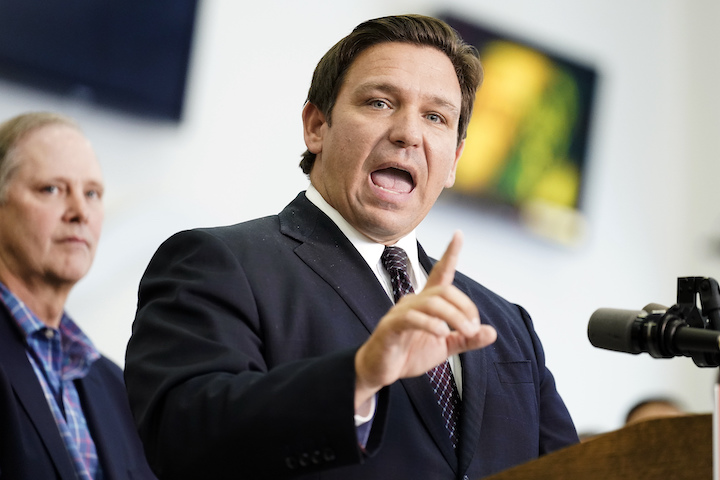 Florida Gov. Ron DeSantis speaks to supporters and members of the media after a bill signing November 18, 2021, in Brandon, FL. Photo by AP/Chris O’Meara

Last week, Florida Governor Ron DeSantis introduced the Stop W.O.K.E Act, a bill he says would allow parents to sue school districts that teach “critical race theory” and, if they win, to recoup legal costs. Critics warn that this private right of action, similar to one contained in Texas’s controversial anti-abortion law, marks a new front in the education culture war and will drown school districts in costly litigation.

They’re right to be worried. This bill will censor teachers and chill classroom speech. But nothing about it is new.

PEN America has been closely tracking these educational gag orders which prohibit teachers from discussing certain topics related to race, sex, and American history in the classroom. Sixty-six have been introduced so far in 2021, and not counting Florida’s bill, nine include a private right of action. Two of these nine bills have died, but six are either pending or have been prefiled for the 2022 legislative session and one has become law.

In other words, Florida isn’t breaking new ground. If anything, it’s behind the curve.

The bill with a private right of action that became law is New Hampshire’s SB2. Tacked onto a must-pass budget bill, the law states that no K-12 student may be “taught, instructed, inculcated, or compelled to express belief in, or support for” a set of ideas about race, sex, and other categories.

Under the law, “any person claiming to be aggrieved” may file a civil suit against the offending school for damages. The state even set up a webpage to help students or parents lodge complaints and initiate legal proceedings.

Missouri’s SB 245, which the state legislature will take up next year, goes even further. Along with a host of prohibitions about how teachers discuss race and sex, it would require schools to offer courses promoting “an overall positive. . . history and understanding of the United States,” and then allows private citizens to sue for any violation. If found guilty, a school would be required to pay the plaintiff’s legal fees and up to $1,000 in civil penalties. In Kentucky’s BR 69, which would forbid public colleges and universities from “subject[ing]” students to vaguely defined “racist” or “sexist” content, that number is $100,000.

In some cases, an individual does not even need to be personally affected by the alleged violation to file a suit. Under an Arkansas bill, any person would have been able to bring a claim regardless of location or relationship to the school. Mercifully, that bill was withdrawn, but one in Pennsylvania, which would permit lawsuits by any resident of the state, is set to be considered next year.

And in Wisconsin, three separate educational gag orders containing a private right of action are currently awaiting a vote in the Senate (they were passed by the Assembly earlier this year). Not only would these bills give parents and employees the right to sue their school districts, but they also propose to eliminate the current cap of $50,000 in monetary damages that a court can award. If passed, education groups warn that the bills could financially cripple Wisconsin’s public school system.

All of this creates some very perverse incentives. After New Hampshire passed SB2, the conservative group Moms for Liberty declared that it would pay a “CRT bounty” of $500 for any tips leading to a successful suit against a school. Governor Chris Sununu condemned the bounty, saying that “any sort of financial incentive is wholly inappropriate and has no place” in the law’s enforcement. Maybe so, but what did he think would happen when he signed the bill into law?

These private rights of action, which essentially deputize parents and students to surveil their teachers, are contributing to a broad chilling effect in the nation’s schools. They are of a piece with provisions in other bills on the docket for 2022 that create telephone hotlines so the public can report a teacher who “omits relevant and important context” from a lesson, or that require that members of the public be permitted to sit in and observe teacher training programs.

If all of this sounds a bit Orwellian. . . well, that’s the point. One of the primary purposes of these provisions is to terrify educators into thinking twice about how they discuss race, sex, and American history—a fact that Governor DeSantis candidly admitted in remarks last week. No wonder so many teachers across the country are reporting a pervasive climate of fear and paranoia.

PEN America has been tracking all of these developments with mounting alarm. They signal a collapse in public trust toward educators and a willingness to strong-arm teachers into ideological conformity. Governor DeSantis’s Stop W.O.K.E. Act, while undoubtedly aggressive, is no aberration. On the contrary, it is increasingly—and disturbingly—business as usual.

Scope and Speed of Educational Gag Orders Worsening Across the Country

Educational Gag Orders: Legislative Restrictions on the Freedom to Read, Learn, and Teach