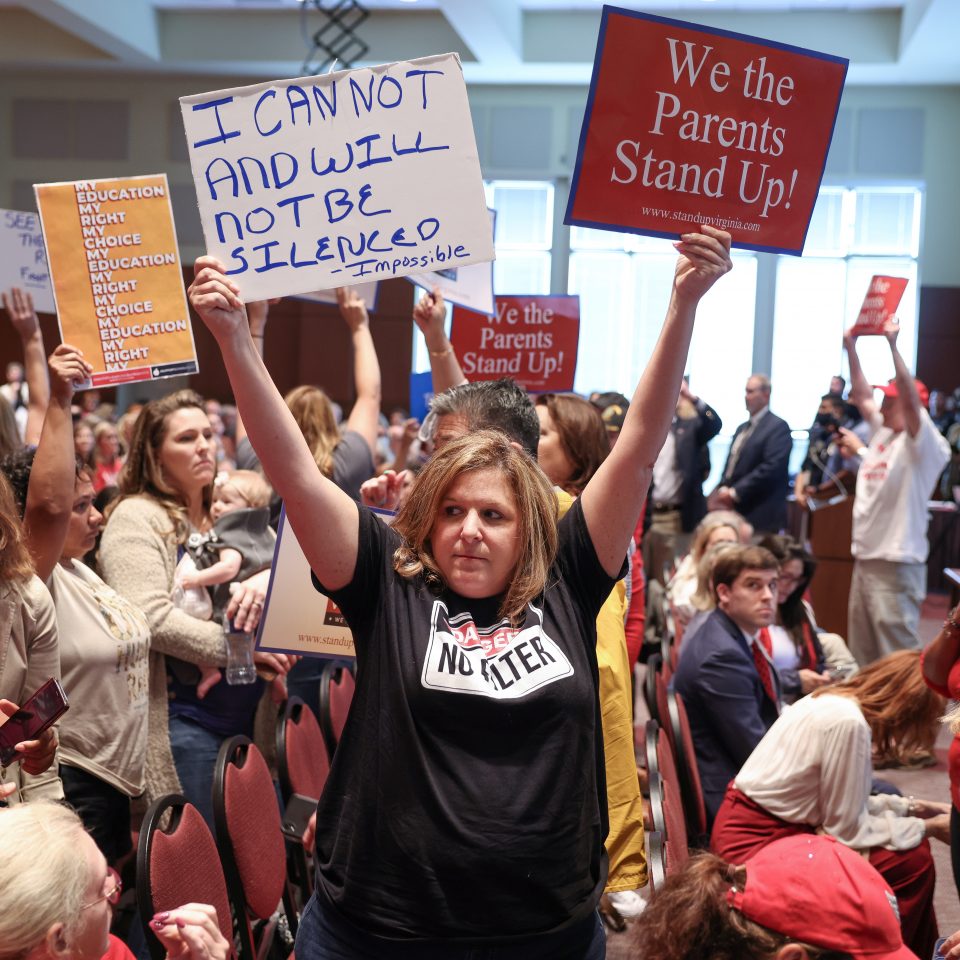 Parents and community members protest after a Loudoun County School Board meeting was halted by the school board because the crowd refused to quiet down, in Ashburn, VA, on June 22, 2021. Photo by Reuters/Evelyn Hockstein

As the country reckons with the persistence of racism and sexism, conservative legislators across the country have been stifling discussion and teaching about anything that even remotely touches on these subject areas, introducing laws that impinge on the freedom to learn. As PEN America outlined in its new report, state legislators introduced 54 educational gag orders in the first nine months of 2021; 11 of them have become law. Parents, students, and educators should be disturbed about these blatant attacks on democratic values of free speech and education. Here are four reasons why these bills are so harmful.

1. They impose viewpoint- and content-based censorship

The bills in PEN America’s report rely on government censorship—something more akin to authoritarian regimes than democratic societies. They employ content- and viewpoint-based gag orders to silence students and teachers, block a wide gamut of literature and materials, and suppress important dialogue and debate. Through these harsh bills, politicians are exercising ideological control over schools and universities, inhibiting students’ and educators’ freedom to read, write, and learn. Legislators and conservatives behind them are turning classrooms into culture war battlegrounds instead of allowing them to be places where ideas flow freely and open inquiry flourishes.

2. They have a chilling effect on educators and trainers’ speech

If teachers, professors, and trainers approach topics related to race, racism, sex, sexism, or gender, they risk stepping on countless ideological landmines set out by these bills. Many educators will understandably be scared of penalties such as budget cuts, loss of teaching certificates, suspensions and dismissals, and pricey lawsuits. Some will inevitably avoid lessons and even mentions of anything connected to these forbidden subjects, which means essential facts and conversations may never even be uttered within a classroom’s walls. The message to educators is loud and clear: Steer away from mentioning these topics, or risk getting fired or losing funding for your school.

3. They are based on a misrepresentation of intellectual IDEAS and undermine educators’ ability to teach

While critical race theory—an academic framework that examines racial disparities—is largely taught in universities and law schools, proponents of these educational gag orders have inaccurately used the term to ban a range of materials and discourses, which start in grade school. By falsely linking critical race theory to just about any conversation about race, gender, inequity, and diversity, they have misused the term to rally political support, silenced narratives on topics such as race and racism, and muzzled huge parts of curricula that are vital for educating students.

Furthermore, these vague and sweeping bills do not take into account how dialogue and teaching evolve in an academic setting. If a teacher discusses the history of slavery in the United States, is he breaking the law by mentioning a topic steeped in racism? If a professor cites the words from one of Dr. Martin Luther King Jr.’s famous speeches, does she violate these bills’ ban on “divisive concepts” about race? When a pupil connects historical lessons with current news and modern-day movements such as Black Lives Matter, are they engaging their professor in a prohibited discussion? And does a professor who merely nods or acknowledges a student’s comments run afoul of the law? We cannot ask educators to do their jobs if we gag them and then expect them to navigate these confusing laws.

4. They are often misleadingly framed as protecting free speech, but their purpose and effect is the opposite

While proponents of these bills claim to want to protect freedom of speech and keep educators from forcing students into certain beliefs, they are in fact doing the opposite. The First Amendment already protects people’s right not to be compelled to hold certain beliefs. But these gag orders actually shut down specific viewpoints and content, banishing some ideas altogether. They blacklist entire subject areas, discouraging teachers from even bringing them up. By putting educators and trainers on notice and threatening to punish them, they undermine open discourse and pose a danger to academic freedom.

The onslaught of these bills comes as the nation engages in long-overdue dialogue about the role of racism and sexism, from the founding to the current day. But a society that cherishes free speech and education must not resort to censorship and gag orders. Stooping to such draconian measures—and putting children and educators at the center of these attacks—sets the nation on a dangerous path and a slippery censorship slope. We cannot turn our classrooms into minefields where teachers are afraid to teach, and learners are deprived from becoming better informed and more educated citizens.

Authors of color speak out against efforts to ban books on race, arguing books are a tool for children and young adults to learn, ask questions and see new or nuanced perspectives about the world around them. https://abcn.ws/3IgY4NQ

The deadline for the Writing as Activism Fellowship application is TONIGHT! Don’t miss this opportunity to join a cohort of NYC-based writer-activists for a six-month immersive workshop experience and produce creative writing pieces centered on activism. https://bit.ly/2ZvShCR

Gift our #BannedBooks tote bag to a reader you love these holidays! Every bag will go towards supporting PEN America's work advocating for authors, educators & the freedom to learn as we fight book bans across the country: https://bit.ly/3nUYmlQ. Use code PENHOLIDAY for 20% off!