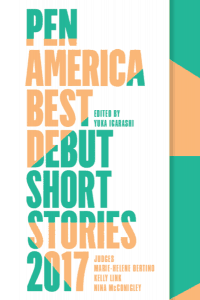 This Friday, September 15, PEN America and Catapult celebrate the launch of PEN America Best Debut Short Stories 2017 with a reading at Housing Works Bookstore. In preparation for this event, here is an essay by Michelle Ming Xu on the anthology. Submissions for the 2018 PEN/Robert J. Dau Short Story Prize for Emerging Writers are now open.

When I first picked up PEN America Best Debut Short Stories 2017, I was living on a friend’s pull-out couch in Chinatown, just south of what used to be the Five Points. I opened the collection, thinking I would read just a few stories before going to bed at a reasonable hour. I was wrong. Hours later and several stories in, it became a process of cheating myself: “The next story is only six pages.” “It’s only 2am.” “The next one will only take me 10 minutes.”

PEN America Best Debut Short Stories 2017 comprises the 12 winning stories of the PEN/Robert J. Dau Short Story Prize, introduced by the editors who originally published each story. The prize was offered for the first time in 2017 to honor emerging fiction writers for their debut stories published in literary magazines or cultural websites in 2016. The prize aims to support the launch of their careers as fiction writers, awarding winners a $2,000 cash prize and publication in the anthology.

The anthology is slim and compact at 200 pages, yet it encompasses worlds: In Angela Ajayi’s “Galina,” a woman in an Ukrainian village copes with infertility and heartbreak. In Grace Oluseyi’s “A Modern Marriage,” a Nigerian marriage turns south. In Crystal Hana Kim’s “Solee,” a South Korean girl experiences attraction for the first time. The stories, chosen by judges Marie-Helene Bertino, Kelly Link, and Nina McConigley, are linked by a simplicity in tone, a sense of quiet urgency, and masterful storytelling. The authors approach daunting themes without the usual clutter and embellishment; instead, the stories of loss, memory, heartbreak, migration, identity, family, and love often stun in their minimalism, humor, and freshness.

As a fellow Asian-American writer who loves anything pickled, Laura Chow Reeve’s “1000-Year-Old-Ghosts” particularly struck me. It’s a story about memory, food, intergenerational tensions, and family, in which memories are pickled:

“Popo taught me to pickle memories when I was thirteen … Memories cut like apples; the knife slides through their protective skin with a crisp snap. I packed them in jars filled with salt, sugar, vinegar, and water. No herbs and spices because they can distort the memories, make them seem too sweet or too bitter … It’s a family secret,” she said to me. “It allows you to forget.”

“I wanted to write about memory in a very physical way,” Reeve told Catapult in a recent interview. “Pickling interested me as both a preservation process and a process that alters whatever is being pickled, and I think it speaks to the way people remember and forget.”

Whether it’s taking readers on a journey with 57 dogs into the woods of New Hampshire, or to the story of an unexpected guest in silvery Nantucket, PEN America Best Debut Short Stories 2017 is a profound and compelling collection that will transport readers through the lives of its characters.