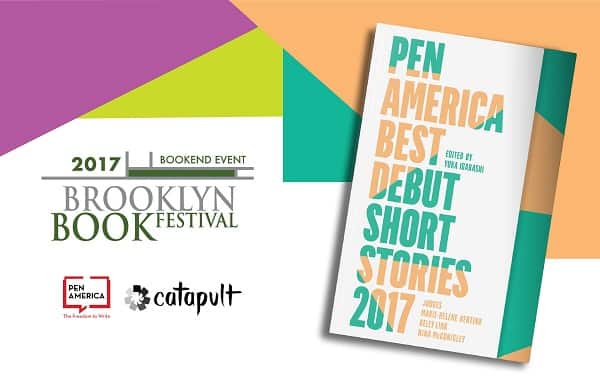 THIS IS AN OFFICIAL 2017 BROOKLYN BOOK FESTIVAL EVENT. Find out what we’re up to during Brooklyn Book Festival here.

Many writers who are household names today got their start when an editor encountered their work for the first time and took a chance. This book celebrates twelve such moments of discovery. The first volume of an annual anthology, launched alongside PEN’s new Robert J. Dau Short Story Prize for Emerging Writers, it recognizes writers who have had outstanding fiction debuts in a print or online literary magazine.

Angela Ajayi’s essays, book reviews, and author interviews have appeared in The Common online, Wild River Review, Star Tribune, and Afroeuropa: Journal of Afroeuropean Studies. She spent more than ten years in publishing, mainly as a book editor at Africa World Press/The Red Sea Press. She holds a BA in English literature from Calvin College and an MA in comparative literature from Columbia University. Recently she was selected for the 2016–2017 Loft Mentor Series in fiction. Nigerian and Ukrainian by birth and American by citizenship, she lives in Minneapolis with her husband and daughter.

Emily Chammah is an assistant editor at American Short Fiction, where she co-organizes the Insider Prize, a contest for incarcerated writers in Texas. She is the creator of the online travel guide Weird and Wonderful Cairo and works as an immigration paralegal in Bay Ridge, Brooklyn.

Jim Cole is a writer in Northern California with a rhetoric degree from University of California Berkeley and an MFA from the University of San Francisco, where his work was nominated for the AWP Intro Journals Project. He lives in the town of Duncans Mills, on the Russian River.

Crystal Hana Kim’s debut novel, If You Leave Me, is forthcoming from William Morrow in 2018. She has received scholarships from the Bread Loaf Writers’ Conference, the Kimmel Harding Nelson Center for the Arts, Hedgebrook, and the Bread Loaf Bakeless Camargo Foundation. Her novel was chosen as runner-up in the 2015 James Jones First Novel Fellowship Contest. She holds an MFA from Columbia University and an MS in education from Hunter College.

Samuel Clare Knights was born and raised in Saginaw, Michigan. He holds a PhD in creative writing and literature from the University of Denver and an MFA from the Jack Kerouac School of Disembodied Poetics at Naropa University. He lives in Colorado and listens to the Grateful Dead every day.

Grace Oluseyi is a writer and a book history scholar who divides her time in work and study between London, New York, and the Middle East.

Amy Sauber lives in New Hampshire, where she is working on a collection of short stories. From the Carolinas, she holds an MFA from the University of New Hampshire and currently teaches in Maine.