Remembering Vera B. Williams: A Tribute 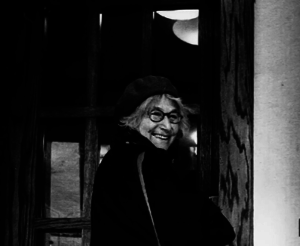 Vera B. Williams was a former longtime chair of PEN American Center’s Children’s/Young Adult Book Authors Committee. Here, friends, writers, and illustrators who worked with Williams on the CYAB Committee pay tribute to the award-winning, and much loved, children’s book writer and illustrator.

Vera B. Williams, our beloved chair of the PEN Children’s/Young Adult Book Authors Committee, one of the world’s most honored authors and illustrators, political activist, and possessor of one of the greatest laughs, died on October 16, 2015, at age 88. Vera and I were co-chairs of the committee for many years, until we handed the reins over to Susan Kuklin and Fran Manushkin. Vera was a fierce defender of children’s right to read and choose their own books.

Vera brought to our committee a sterling belief in children’s right to read. In her books, and even in her own life, she felt protective of the words and pictures she was sharing with children. She wrote her books and used her watercolors to fuse her books with love and caring. She did not believe that all children needed to be exposed to every hard truth. She wanted them to find those hard truths themselves and in their own way.

If a book was challenged, even a book that she might not have loved, she wanted children and readers to be free to find that book on their own. Together, we wrote:

As writers, we have a deep respect for children’s minds and imaginations— their need to understand themselves and the world around them. Yet we know that books for young people are the ones most often taken off shelves because of a single complaint or, more harmfully, simply never put on library shelves for fear of controversy. Books must be accessible for any readers. Young readers come to our libraries and schools looking for honesty in fiction and nonfiction. Sometimes they come upon books that are important to them without even realizing what they are looking for.

Vera loved talking to children about writing and drawing and finding the joy in telling their own stories. One of her favorite moments as she got older was when a child piped up and said, “I thought you’d be more new.” In 2010, Vera and I went to the Bronx New School, where I frequently did writing projects. The school was so thrilled that they got the Bronx Borough President to declare May 6, 2010 “Vera B. Williams Day.” They arranged for the “Bronxmobile” to take Vera to all her favorite places from her childhood.

[Photo: Vera at the home where she grew up. P.S. Notice the blouse she is wearing is material she had made to match the upholstery in A Chair for My Mother.]

Among the many legacies Vera leaves us with is the immortal saying that “Potluck parties are proof that anarchy works.” At our many Children’s Book Committee parties there was always someone (usually Susan Kuklin and myself) who would worry that we might have too many desserts, or not enough main courses. Vera would always tell us not to worry. And then she would make gravlax for 50. And you know what? She was right. The potlucks were always wonderful. We had enough of everything, and they were proof that anarchy works. 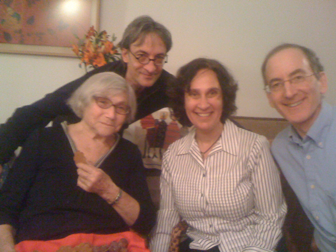 [Photo: Vera B. Williams, Chris Rascka, Susanna Reich, and Paul Zelinsky at a PEN Children’s Book Party, in her apartment.] 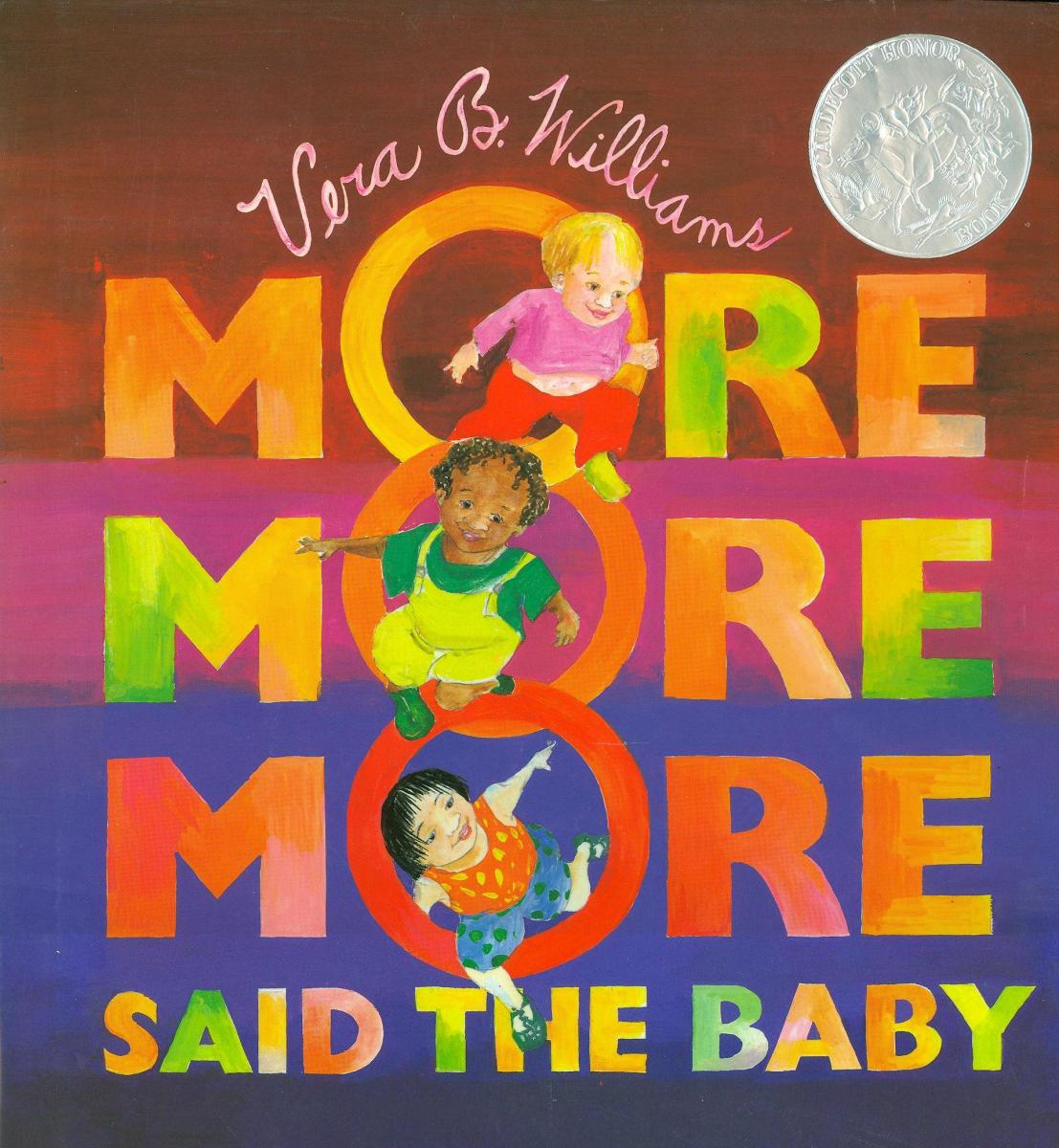 Every newborn that has come into my life has received an autographed copy of one of my favorite books of Vera’s: More More More Said the Baby. It is a book filled with love and joy. Vera embraced and championed diversity long before “We Need Diverse Books” became a rallying cry. Little Guy, Little Bird, and Little Pumpkin share one universal trait. They are so lovable that nobody can resist them. Upon hearing of her death, someone posted: “ No, No, NO, said the world.” We in the children’s book community at PEN are also saying “NO! NO! NO!” but we are also thankful for time we had with her. 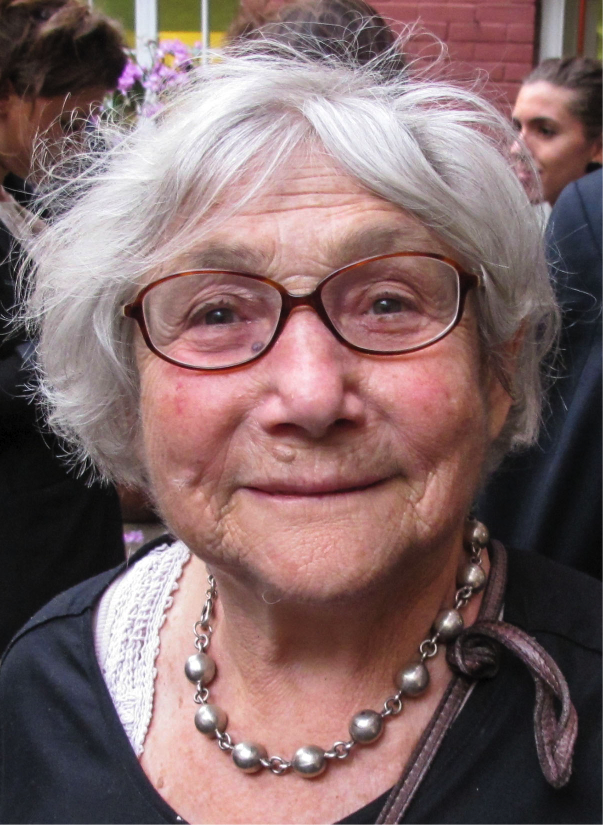 Vera wrote the original poems for Amber Was Smart, Essie Was Brave on paper napkins. She showed them to me—all crumpled up, some with coffee and jam stains. “What do you think of these?” she said, handing over a carefully ordered pile.

They were exquisite. “It’s a book! It’s perfect.” A big Vera Williams smile filled her face. “I think so too.” Vera knew what she was about—artist, writer, defender of children, pleasure-seeker, passionate human being.

Writing this piece is hard. It’s too soon, too raw. Vera sits on my shoulder, whispering, not softly, “Keep. It. Real.”

Memory: Vera participating in PEN programs and panels. She brought down the house at her BFF Grace Paley’s memorial tribute by reading a leaflet entitled “The Unity Statement,” which they wrote together back in the ’60s. 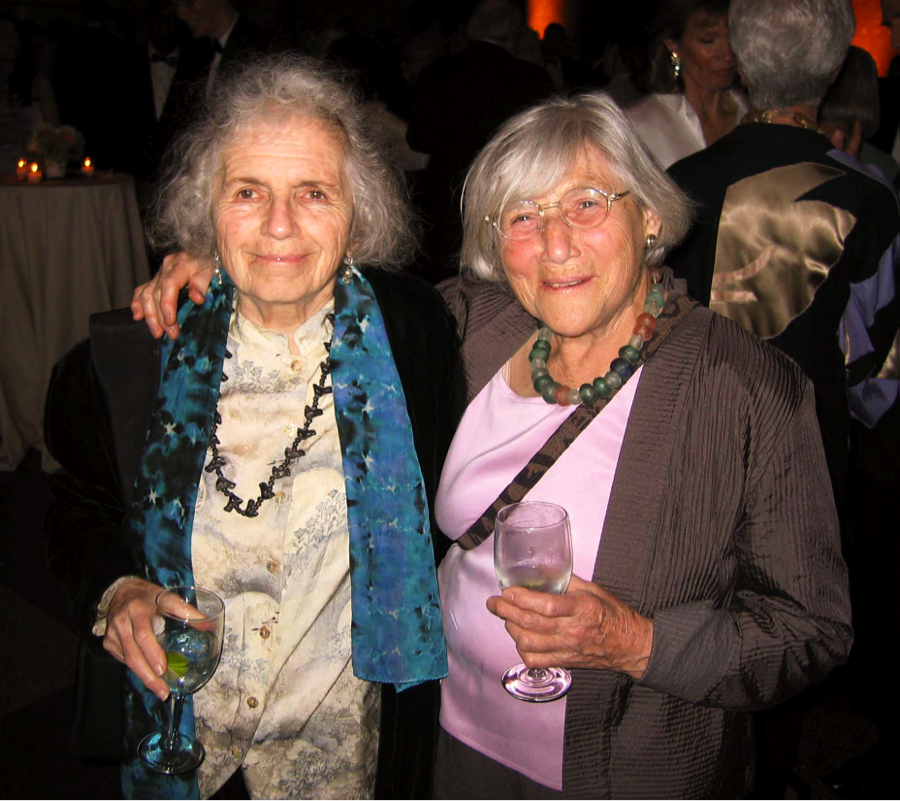 [Photo: Vera and Grace Paley at the PEN gala]

Memory: Photographing Vera for Essie’s jacket cover. The shoot began in my garden, surrounded by flowers. The pictures felt artificial. Why? “Because it isn’t my garden. It’s your garden.” Go west to the river. Walk north, walk south, stop here, stop there. Find the light. Morning becomes late afternoon. Zilch. Mind you, this was a film camera. We only felt the images. “Come over for tea,” Vera said. “We can do this another time.” At the front door of Vera’s beloved Village apartment, we took a few quick snaps. VBW smiled broadly. “Ahhhhhh.”

Memory: Vera in the audience at the 2014 World Voices children’s panel on censorship. Who can forget how she wowed and stumped the panel during the Q&A? “Why isn’t anyone doing picture books about young children giving themselves physical pleasure?”

Memory: Pleasure. Toward the end of Vera’s life, she used the word often. A retrospective of her work is currently taking place at the Alliance Gallery, 37 Main Street, Narrowsburg, NY. The title of this exhibit is “Art, Pleasure, Politics, and Making A Living, 60 Years of Vera B. Williams’ Works.”

Vera. It’s been a pleasure.

I think everyone who met Vera felt like she was suddenly an old friend. In my case, it also was sort of true. I met her in the halls of Greenwillow Books not too long after I moved to New York to be an illustrator. At Greenwillow you were always meeting other artists and authors; it was more than a publishing house, it was a kind of social hub (and there were always cookies or cakes that someone had brought in). Publisher Susan Hirschman introduced me to the author/illustrator Vera B. Williams. I don’t recall how it was that Vera and I came to realize that this was the person my mother had always talked about, the sister of her old high school friend Naomi Baker, the one who had taken up children’s illustration just as I was beginning to do it. But we figured it out. Growing up in Illinois, I hadn’t even known Naomi personally, but I’d always known of her, and in college had made contact with her in a similarly strange and random way. I already felt warmly toward the Baker family. So from the moment I met Vera, she, too, was an old family friend.

Vera eventually became a legitimate old friend. She was a captivating, warm presence and I am happy for the time I had the good fortune to spend with her. She was intensely interested in almost everything, thoughtful about it, smart, and had a merry quality that I associate with her more than anything else. That, plus her wonderful books.

When I was making little animations to go with a book that Fran Manushkin wrote and I illustrated called The Shivers in the Fridge, one character was a Grandma who didn’t exactly fit the picture book stereotype—she was cranky and pointy and not a bit supportive of young Sonny, and I thought Vera’s voice would be just the thing. She could be cranky and merry at the same time. Vera didn’t mind, so I carried recording equipment to her apartment in Greenwich Village and spent too much of an afternoon asking her to repeat and repeat the tiny part in this tiny movie. I must still have somewhere all her repetitions of the line, “Don’t do it! You’ll get into a pickle!”

I suppose Vera might give cautionary advice like that to a grandchild, but as for herself, “Don’t do it!” wouldn’t apply. She did it. And she got into pickles. This was part of what made so many, many people love her. And we will all miss her.

Vera was so full of life, it’s hard to believe she’s gone. As an artist and writer, her work was infused with warmth and humanity, and she was an outspoken voice for children whose voices are not always heard. She was opinionated and humble, lovable and down-to-earth, sensuous and serious. Even in her eighties, she hadn’t forgotten what it was like to be a young child, and the light of the young child within her shone so brightly that those around her who might have forgotten what it was like could suddenly remember, too. As a former chair of the PEN Children’s Book Committee, Vera was a staunch defender of freedom of expression, as well as a gracious and generous host of many a potluck dinner. When she walked into a meeting, the room would hum with a higher energy and spirits would lift, knowing that her sense of humor would soon have us in stitches, while at the same time her insightful comments would help us see the world in a new way. Her voice and presence will be greatly missed.

As anti-China rhetoric intensifies from the White House, Chinese students in the United States increasingly feel unwelcome both here and in their home country. https://bbc.in/2De9LbK

Last year, the Indian central government cut the internet, phone lines and cable connections to suppress dissent. A year later, while internet and phone lines have largely been restored, many newspapers are relying on government ad revenue to stay afloat. https://cnn.it/3fwMvTg