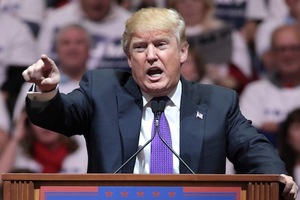 “I know the reporting is wrong, and I believe the media representatives that report what goes on here know it’s wrong but they go on their merry way highlight the negative aspects of what might go on at Gitmo, never giving you credit for what you do here”/ “the self-appointed and self-anointed critics of what goes on here don’t even understand those words let alone understand what they mean in our heart.”
—John. F. Kelly, nominee for Secretary of Homeland Security (July 1, 2015)

“And because we have a society that, by and large, is illiterate in these areas—science, math and engineering—what we do is a mystery to them, and they find it scary. And because of that, it creates easy opportunities for opponents of development, activist organizations, to manufacture fear.”
—Rex Tillerson, Exxon Mobil CEO, nominee for Secretary of State (December 13, 2016)

“It would do us all a big favor if the media would get their act together and quit stirring the pot and creating conflict where it shouldn’t exist.”
—Reince Priebus, Chairman of the RNC, White House Chief of Staff (November 10, 2016)

“This article is part of a disturbing trend in the left-leaning press to undermine the heroism of men and women who are willing to risk their lives in the defense of our nation’s freedom.”
—Rick Perry, former Governor of Texas, nominee for Secretary of Energy (May 30, 2016)

“While the comments were inappropriate and insensitive, the mainstream media’s coverage of this story is appalling. In over 20 years in politics I have never seen 1 of the countless inappropriate comments by Democrats ever covered to a faction of this. ”
—Sean Spicer, potential Press Secretary (December 1, 2014)

“The liberal media continues to unleash a daily barrage of false and misleading attacks against our state and our values…The liberals and their allies in the media will stop at nothing to undermine the conservative reforms we are making in Kansas.”
—Sam Brownback, Governor of Kansas, potential of Secretary of Agriculture (April 25, 2016)

“We have to talk to them about, maybe in certain areas, closing that internet up in some ways. Somebody will say, ‘Oh freedom of speech, freedom of speech.’ These are foolish people.”
—President-elect Donald Trump (December 7, 2015)

“What we don’t see is that freedom is not a concept in which people can do anything they want, be anything they can be. Freedom is about authority. Freedom is about the willingness of every single human being to cede to lawful authority a great deal of discretion about what you do.”
—Rudy Giuliani, Former New York City Mayor, under consideration for U.S. Secretary of State (March 20, 1994)

“Folks on TV . . . these are the same people who have ridiculed and mocked the American people for just about too long, don’t you think? And now it is our time to put them on trial.”
—Laura Ingraham, under consideration for White House Press Secretary (November 6, 2016)

“The reign of terror that the snakes @nytimes @washingtonpost @CNN @MSNBC @ABCPolitics @NBCNews @CBS had over our politics is over. Killed it.”
—Sheriff David Clarke, under consideration for U.S. Homeland Security Secretary  (November 11, 2016)

“You have freedom of speech so I can be heard.”
—Rudy Giuliani, Former New York City Mayor, under consideration for U.S. Secretary of State (March 20, 1994)