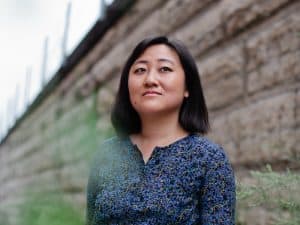 1. What was the first book or piece of writing that had a profound impact on you?
In 1980s China, there was this popular children’s TV show based on the classic Chinese epic Journey to the West. It features Sun Wukong, this mystical monkey king who, due to his hubris and mischief, is trapped under a mountain by the Buddha for 500 years. He’s finally given the opportunity to be forgiven by escorting a monk on his pilgrimage to retrieve some Buddhist sutras. The show consists of this fantastical road trip through earthly and supernatural realms.

As a kid, I watched this show every week. Sun Wukong is fascinating because he’s this figure who possesses incredible abilities but has to constantly subjugate them in order to redeem himself. He has to work against himself. In an indirect way, Journey to the West is the first book that affected me.

” . . . fiction at its best can reveal truth better than the facts alone.”

2. How does your writing navigate truth? What is the relationship between truth and fiction?
I’m not sure how to answer this question. But I do know that my fiction is informed by being in the world. For a long time, I had wanted to be a journalist, and I regret that I didn’t persist more in that field. But I do think, as other writers have expressed, that fiction at its best can reveal truth better than the facts alone.

3. What is one book or piece of writing you love that readers might not know about?
Mrs. Caliban by Rachel Ingalls is the one I’ve talked up to everyone this past year. Although, like most things I love, I don’t fully understand it.

4. How can writers best contribute to society? How can artists affect resistance movements?
The Kafka story “Josephine the Singer, or the Mouse Folk” is probably the most lucid distillation of the artist’s role in society that I can recall. My answer would be to just direct you to that story.

5. What is the last book you read? What are you reading next?
The last novel I read was Territory of Light by Yuko Tsushima, which I found very immersive and inhabitable. It doesn’t condescend to the reader. Today I’ve begun reading some poems by Louise Glück, from Faithful and Virtuous Night and The Seven Ages.

6. How does your identity shape your writing? Is there such a thing as “the writer’s identity”?
I’m not sure. But maybe it’s the other way around. Maybe my writing shapes my identity, if we take that to mean self-knowledge. My understanding of myself changed after writing the novel.

7. What is the most daring thing you’ve ever put into words? Have you ever written something you wish you could take back?
Of most fiction (and some nonfiction) I’ve published, there’s usually a moment when I wish I could have taken it back. If I don’t feel that dread, then maybe the piece didn’t take enough of a risk.

8. What advice do you have for young writers?
I’m feel like I’m still starting; at the same time, I also teach creative writing. There are some things I find myself repeating to students: You don’t need to be gifted with a beautiful singing voice, sometimes the strain of trying to sing actually sounds more real. Read a lot, but also seek out other artistic mediums so that you don’t get locked into the conventions of form. The goal is not to destroy your self-doubts, which is likely impossible, but to learn to co-exist peacefully with them.

9. Which writer, living or dead, would you most like to meet? What would you like to discuss?
Of the fiction writers and poets that I admire, my sense is that they have grappled with some difficult parts of themselves in order to give more generously in their work. For that, I wouldn’t want to punish them with the task of making small talk. Or make them discuss what they’ve already put so eloquently in writing.

“Narrative gives assurance that we don’t live in chaos, which is necessary to get from day to day.”

10. Why do you think people need stories?
Making narrative is the act of organizing information into a coherent system of cause and effect. In this way, it is the act of creating meaning. It is something we all naturally do in order to situate ourselves in the world. Narrative gives assurance that we don’t live in chaos, which is necessary to get from day to day.

Ling Ma was born in Sanming, China, and grew up in Utah, Nebraska, and Kansas. She attended the University of Chicago and received an MFA from Cornell University. Prior to graduate school she worked as a journalist and an editor. Her writing has appeared in Granta, VICE, Playboy, Chicago Reader, Ninth Letter, and other publications. A chapter of Severance received the 2015 Graywolf SLS Prize. She lives in Chicago.

The PEN Ten: An Interview with Author and Translator Stefania Heim

“Write the World You Want”: A PEN Ten Interview with Cadwell Turnbull