“Write the World You Want”: A PEN Ten Interview with Cadwell Turnbull 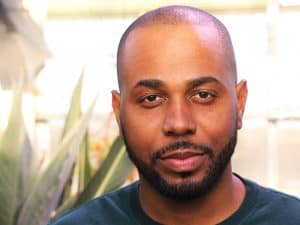 1. What was the first book or piece of writing that had a profound impact on you?
The first book that had a profound impact on me was The Diary of Anne Frank. My eighth grade English teacher assigned it to us and we had to write a paper about it. I didn’t start reading it until the weekend before the paper was due out of procrastination. But once I started reading it, I couldn’t stop. I was swept up in Anne Frank’s life, moved by her daily concerns, her boredom, her dreams, her desire for closeness, for deep friendship, her questioning of the world. It felt like she was reaching through time and speaking to me. There was no way I could be prepared for the ending, nor do I think I truly understood the threat she faced. I was a young boy in the Virgin Islands. Our lives were so different. But I recognized her humanity. I felt a deep sense of unfairness in the world that she was lost, that she never got the chance to grow up. It was my first glimpse of the political, the way it bleeds into everyday life.

I stayed up late and wrote the paper, my feelings still raw. I don’t remember what I wrote, only that I told the truth. I turned it in, like any other paper, relieved that I had finished the assignment. Later my teacher pulled me aside and told me that she thought I should consider being a writer. Up until then I thought I was going to be a scientist. It was the first time I imagined another path for myself.

2. How does your writing navigate truth? What is the relationship between truth and fiction?
As a speculative fiction writer, I do a lot of imagining. Often it is not just my characters that aren’t real, it is also the world they inhabit. What remains true is their humanity. I try to create characters that have realistic responses to speculative events. Aliens land, but what is the human response? How does it vary from person to person? Who are these people really? I try to be truthful in that telling, put down on the page what I think might actually happen. I try to make my characters messy, their actions messy, the way they relate to each other messy, because that’s what I see in the world. I think that’s the obligation, to be honest even if you’re making up a story.

“I try to make my characters messy, their actions messy, the way they relate to each other messy, because that’s what I see in the world.”

3. What does your creative process look like? How do you maintain momentum and remain inspired?
I give myself manageable goals. I set a word count that I have no problem achieving. I often cheat, but the word count is low enough that if I’m cheating I’m doing more, not less. Set a small goal, cheat up. That builds confidence, and it is a kindness that you can give to yourself. “Don’t worry, take your time,” is a way to love yourself while doing. I put one foot in front of the other and keep going. Nothing else has worked for me quite as well as this.

The other thing I do is read work that I admire. I know I don’t know everything. There’s still a lot to learn and tons of people to teach me. Plus, it is always great to get lost in other people’s work.

4. What is one book or piece of writing by a Caribbean author or poet you love that readers might not know about?
“They Will Take You From You” by Brandon O’Brien. He is a talented brother from Trinidad, and this short story is fire. Seriously. Read it.

5. How can writers affect resistance movements?
I think we all can affect resistance movements by telling the stories of everyday resistance that we see and by training our lens on the activists in our communities, making them our protagonists and heroes, showing their full lives along with the work they do. I think activism in fiction remains a huge blind spot. How can we inspire people to act if we don’t show the activists? The stories are there already. People have always been struggling to make a better world. We just need to tell those stories.

6. What is the last book you read? What are you reading next?
I’m on a Donna Tartt kick right now. I just finished The Secret History with my wife. Now we’re reading The Goldfinch. Tartt has been schooling me with every sentence, as a writer and a human being.

7. What do you consider to be the biggest threat to free expression today? Have there been times when your right to free expression has been challenged?
Inequality. We reward the people with the most the ability to be heard, fully, no matter what they have to say. We are preoccupied by privilege. Our worldview skews towards it. There is no greater threat to free human expression. Listening to the marginalized is a start, but equality would be better.

Being from the U.S. Virgin Islands, I have often felt invisible to the outside world. I often have felt like we didn’t matter. No one should feel that way. Ever.

“We are preoccupied by privilege. Our worldview skews towards it. There is no greater threat to free human expression.”

It took me a long time to write about home, but once I did, I found the thing I’d been missing. My characters felt more like people. I think it was because I wasn’t erasing myself anymore.

For centuries the Virgin Islands has been someone’s colony. Hands have changed over the years, but the result is always been the same: We haven’t had the opportunity to truly be in charge of our political destiny. Yet we live. We live because we don’t erase ourselves. We are Virgin Islands Strong, no matter whose name is in front. Because I’m beginning to understand the value of not being erased, I bring that to the characters I write. Writing is an act against erasure and as such a decolonizing act. It is a hard lesson to learn, not to erase one’s self. I’m still learning it.

9. What advice do you have for young writers?
Write what you want to see. Write the world you want.

10. Which writer, living or dead, would you most like to meet? What would you like to discuss?
I wish I got to meet Ursula K. Le Guin in life. No writer has had a more profound impact on my writing and my mission as a writer. If I could meet her, I would just listen to whatever she had to say. It wouldn’t matter. I’d just want to be in the room, take it in. I would hope we’d get to how writing can help change the world; I know she’d have great things to say on the subject. I would also hope I’d have the courage to tell her just how much she’s changed my life.

Cadwell Turnbull is a graduate from the North Carolina State University’s Creative Writing M.F.A. in Fiction and English M.A. in Linguistics. He was the winner of the 2014 NCSU Prize for Short Fiction and attended Clarion West 2016. His short fiction has appeared in The Verge, Lightspeed, Nightmare, and Asimov’s Science Fiction. His Asimov’s short story “When the Rains Come Back” made Barnes and Noble’s Sci-Fi & Fantasy’s Short Fiction Roundup in April 2018. His Nightmare story “Loneliness is in Your Blood” was selected for The Best American Science Fiction and Fantasy 2018. His Asimov’s novelette “Other Worlds and This One” was also selected by the anthology as a notable story. The Lesson is his debut novel.

The PEN Ten: An Interview with Theresa Warburton and Elissa Washuta

The PEN Ten Interview: Author William Dameron on the Artistry of Writing