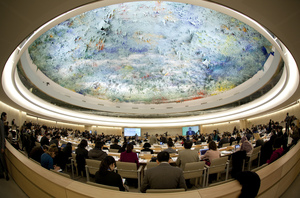 PEN International joined a coalition of rights groups on Friday to call for a Human Rights Council investigation into privacy abuses by the U.S. government and tech companies in the National Security Agency’s extensive surveillance program. The petition expresses “strong concern” over the PRISM program, including the alleged U.S. practice of sharing the results of its investigations with the government of the United Kingdom, and notes provisions in international law that prohibit surveillance on such a broad scale without adequate due process protections. The text also demands protections for whistleblowers who reveal abuses by governments. The petition further requests that the Human Rights Council:

1. convene a special session to examine this case
2. support a multistakeholder process to implement the recommendation of Mr La Rue that the Human Rights Committee develop a new General Comment 16 on the right to privacy in light of technological advancements, and,
3. request the High Commissioner [for Human Rights] to prepare a report that:
a. formally asks states to report on practices and laws in place on surveillance and what corrective steps will they will take to meet human rights standards; and
b. examines the implications of this case in in the light of the Human Rights Council endorsed United Nations Guiding Principles on Business and Human Rights, the “Protect, Respect and Remedy” Framework of A/HRC/RES/17/4.

The revelations about the surveillance program are unfortunately not surprising for PEN American Center. For over three years, we fought the NSA’s sweeping surveillance powers under the FISA Amendments Act in federal court, culminating in a crushing decision in March 2013 by the U.S. Supreme Court to uphold the Act as constitutional because PEN could not prove that it had been “harmed” by the secret program. The petition forces what was previously a domestic conversation into a broader international context, and charges the UN human rights apparatus with investigating what is clearly a cross-border phenomenon. The PEN Declaration on Digital Freedom, a concise statement of PEN’s views on free expression in the digital age that was approved in 2012 at the PEN International Congress, explicitly prohibits surveillance and data mining by both governments and companies if they do not follow international due process standards.