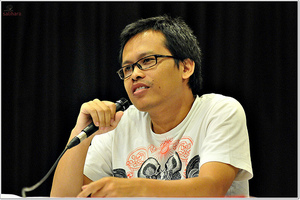 I was introduced to Eka Kurniawan while doing Ph.D. research in Java in 2011. Literary-minded friends described his work as “required reading” and him as “the next Pramoedya,” referring to Indonesia’s most famous novelist. I quickly acquainted myself with his writing, and soon after, with the author himself.

I was especially drawn to his first novel. Originally published in 2002 to wide critical acclaim and currently in its fourth printing, Cantik Itu Luka (Beauty is a Wound) is a sweeping family saga that develops alongside the Indonesian nation. The novel is astounding for multiple reasons.  First and foremost, it is compulsively readable, combining history, satire, legend, humor, and romance in a sweeping polyphony.

It is also highly political. Revolving around the fate of main character Dewi Ayu, a beautiful Indo prostitute, and her four daughters, various plotlines incorporate bestiality, incest, rape, murder, insanity, monstrosity, and the often-vengeful undead. This gleefully grotesque hyperbole functions as a scathing critique of Indonesia’s troubled past; the offhanded but rapacious greed of colonialism, the chaotic struggle for independence, and a mass-murder of perhaps as many as one million during the anti-communist killings of 1965, which led into three decades of autocratic rule where dissenters could be censored, imprisoned, or “disappeared”. As such, Beauty is a Wound is pointed about the havoc appetite has wreaked upon a place and people of idyllic beauty. Yet it is never naïve: with both passion and irony, Kurniawan implicates his readers, who can’t help but take pleasure in the exuberant language used to depict the carnage while simultaneously championing the resilience required to survive it. The novel is therefore a luscious yet astringent product of the artistic expression that blossomed after Suharto’s fall, an indication of how Indonesian artists and thinkers apprehend their nation’s history and worry its orientation towards the future.

The novel does all this in a distinctive West Javanese voice that will feel fresh and new to readers, evoking multiple local influences including the bawdy wit and epic scope of wayang theater; the folk tales for which the region is famous; and Indonesian horror and martial arts genre fiction. And yet the book is decidedly cosmopolitan, equally influenced by world greats such as Rushdie, Marquez, and Hamsun. As such, it occupies a unique position in history of the Indonesian novel, which many argue is still in an experimental and nascent phase—at least as new as the Indonesian language itself, which was nationally instituted in 1945 and has yet to supplant the hundreds of local languages spoken throughout the country as a mother tongue. The novel is helping to establish Indonesia’s voice, which remains underrepresented within world literature, and can also illuminate how world literature has influenced Indonesian writers.

For all these reasons, I felt it urgent that the novel be translated. I have faith in its crossover appeal as an engaging piece of literature that can stand on its own, but I also want to underscore its importance as a cultural and historical artifact contributing to a wider understanding of, and access to, contemporary Indonesia.