On the Frontiers of Plaster (A Few Notes on Sleep) 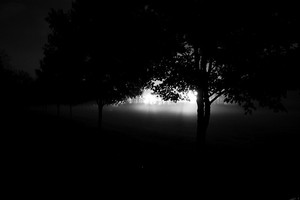 Edward Gauvin is a recipient of a 2013 PEN/Heim Translation Fund grant for his translation of Jean Ferry’s The Conductor and Other Tales. Read his essay on translating Ferry’s work here.

from The Conductor and Other Tales

— She would wake me; so I killed her…

Sleepers make for poor dead men; those who wake them live well.
A man roused from sleep can legitimately claim self-defense.
A man who dreams is not asleep. You can’t do everything at once.

We never rise into sleep, we always fall or sink into it. Sleep is a dark house dug deep in the ground. Happy are they who rent the lowest level, the final floor, where no one can disturb them. The windows open inward, and black earth clings to the glass. In the middle of the suite, insulated by endless corridors: the bedroom. The bed lies in a hollow; one enters through a manhole, as into a submarine. Quiet you could cut with a diamond tip circles slowly, gumming ears and lungs. No, it’s not the air of day, your daily air—especially not yours.

Crushed against the earth, the sleeping man, by a strange osmosis, acquires some of its qualities, turns mineral. A naked sleeping man rarely fails to resemble a statue. He is of stone, or clay. A whiter blood flows in his veins. We have been told sleep is a suffocation. Rather, a petrification.

Why, then, is one of history’s most sinister villains—the man who bled, impoverished, terrorized, shackled, made a fool of our land of France (formerly Gaul)—the object of every Frenchman’s devoted veneration (not to mention foreigners)? Because he never slept. Napoleon never slept. What a genius! Work hard, my boy, and maybe one day, you too will sleep no more.

O rage! O abominable sorrow! Man invented saints, and would be one at any price, through any means. Any at all, in order no longer to be a man on Earth, living a man’s life.

The cults of the saint and the hero have each wreaked greater ravages on humanity than alcoholism and syphilis.

The main social constraints (the first that the future has a duty to destroy): the alarm clock and the guillotine. Two more or less identical accessories that, moreover, complement each other. He who comes to wake the condemned man was himself woken by an alarm clock. Thus—no alarm clock, no guillotine. Furthermore, were everyone to sleep their fill, crime would cease to exist. Imagine all humanity rising one morning from a full night’s sleep. What turmoil! What social system could resist it?

Having made the barrel of his beer belly into an alarm clock, the Angel of the Strange plays capeador to my bull. Blinded, routed, in despair, my limbs spent, a mask of glue over my face, two hooks of red iron in my nostrils, I charge and stumble into his offered lure: a white sheet on which appear, faintly, the figures of a sundial.

Hard to imagine a man who’d be satisfied with being publicly deemed “nice.” (I don’t mean “nice” in the popular sense, synonymous with “pathetic.” I mean it in the sense of “good.” For example: Man is born “good.”) Novelists have never wasted their time telling the story of a nice man. Only a few characters in Dickens—especially the Cheeryble brothers from Nicholas Nickleby—are all-around nice, which gives them a slightly unreal quality so disturbing as to be obscene. I think everyone has forgotten the Cheeryble brothers, the only nice men in all of world literature, and no one insists on knowing how I see them. And yet they could only be hideous albinos with dandruff-covered shoulders. From their nice red eyes great milky tears run endlessly, falling on their vests of sticky wool. Around them floats a light and vomitous odor, the very stench of their niceness. They shook my hand with niceness one night on the bridge of a coal freighter whose sterncastle was a small Grecian temple, pure and clean. Behind the columns of the portico, beasts wandered hither and thither, vague but dangerous.

Man’s irritation at hearing himself called “nice,” especially in public, is just, and will surprise no one.

That said, consider the following experiment if you will—admittedly less dangerous.

Before a great many people, and preferably in the presence of the woman he loves and covets feverishly, tell a man: “I saw you sleeping that night. What wonderful slumber! How soundly you slept! Boy, when you sleep, you sure aren’t joking around!”

What would happen? That man would feel even more savagely wounded than if you’d called him nice. Even had you broken the bitter bread of exile together, or shared the stifling dangers of a spelunking expedition, that man would henceforth be your enemy. He would hound you forever with his venomous hatred. Avoid empty streets, open unexpected packages with care, beware pink candles billowing with smoke. Leave the country if your means allow. And once abroad, watch out for business card vendors in Suez, the water carrier by the locks of Gatún, the elevator boy at the Taj Mahal, the llama herder.

That man will know no rest till he’s struck down the one who saw him sleep.

Because no man wants to sleep, no man wants to be sleepy. If the Church had made its main renunciation abstaining from slumber, rather than aiming a little lower, the world would be but a vast chapel. For once, the Church would have a rendezvous with our secret desire. Man is ashamed of his sleep; he refuses to have slept.

Sleep is the enterprise all society fights most fiercely, second only to love. Seeing a sleeper irritates a man, reminds him that he too is a sleeper, and that before twelve hours are up, he too will succumb.

This sleeper escapes you. The prisoner who sleeps dreamlessly is freer than the jailer who, keys at his belt, eyes burning with sleep, paces the prison halls from one cell to the next, just like a worm inching from grotto to grotto in a slab of Swiss cheese. What utter dark must reign within the bubble of air trapped in the heart of a thousand-pound wheel of Gruyère!

But beware! Without dreams, a dreaming man is but the living dead aware of his death. He dreams, he lives—perhaps he lives the truer of his two lives, but c’est la vie, and we cannot see what he lacks that might make him more like the woken man he soon will be. Through dreams, life extends itself into sleep and degrades it terribly. Here is man once more abandoned to beasts, to cold, to psychoanalytic interpretation, to page proofs, to regrets—to poetry, in a nutshell.

There is sleep without dreams, whether we wish it or not. An unusable sleep that cosmically puts man in his true place in the world.

Man is a sunflower. This obvious truth has gone unnoticed. Once stated, everything else follows.

Take a man at noon. He stands erect. Overhead is the sun. I won’t say this man has no wish to maintain this position for all time, but it’s not up to me, I’m not the one who laid out this story, that’s not what happens. Soon, the Earth having turned (or the sun—the matter is not entirely settled), the man is no longer okay with things. He keeps living upright, but his head follows the sun as the needle does a magnet. Soon the sun is below the horizon. It’s over. All the man’s efforts to keep his head above the line of that horizon—below which sinks the doze, I mean the day—are efforts against nature. Willy-nilly, man stretches out on the ground to soothe his heavy head, which the sun tugs at from the other side of the Earth. Let him remain standing if he dares. All over his body and right up to his brain, he feels an irresistible attraction that wears off only with dawn. But then his body, exhausted from the struggle, surrenders to the poor sleep of day, a hollow, tortured sleep, an illegal sleep, the sleep of those who defend their sleep from the sun.

Perhaps what happens at night is not ours to know. That’s why it’s so easy to be a poet when speaking of the night, that unknown world. And poets have hardly denied themselves the mining of that rich vein. Sleep peacefully, the poets say, for you we shall explore nights of banes, love, rebellion, and on the shores of that mysterious island they have landed as upstarts, as conquerors, ravaging everything as they pass, depleting immense deposits of dream without a thought for the future.

But a few dark nights are yet ours: poets, discerning nothing in their shadows, have disdained them. Ink-thick nights. In their warm duvet as by their icy floes, we swim effortlessly, brushing by reefs of night we alone know, caressing the fish of nighttime slumber, black and familiar in the dark of dark rooms utterly obscured by black stars.