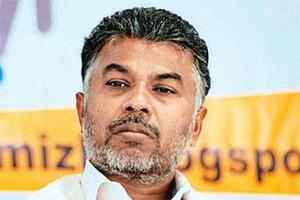 This January will mark the second anniversary of Tamil writer Perumal Murugan’s self-proclaimed “Literary Suicide”. In response to intense pressure and threats from right wing Hindu groups and caste leaders, Murugan declared in a January 13, 2015 Facebook post (since deleted) that “Perumal Murugan the writer is dead. As he is no god, he is not going to resurrect himself. He also has no faith in rebirth. An ordinary teacher, he will live as P. Murugan. Leave him alone.”

An award-winning author and literary scholar, Murugan’s withdrawal from writing marked a huge loss to the canon of Tamil literature. Widely considered an expert in the Kongunadu dialect and folklore, Murugan has published authoritative editions of classical Tamil texts, as well as written six novels, four short story collections, and four collections of poetry. His novels Current Show, Seasons of the Palm (shortlisted for the Kiriyama Prize in 2005) and One Part Woman, have been translated into English, and his writing has received widespread critical acclaim, and awards from the Government of Tamil Nadu and Katha Books.

The trouble began when Murugan’s book One Part Woman was translated into English in 2013 by Bharatanatyam dancer and LGBTQ activist Aniruddha Vasudevan. One Part Woman tells the story of a childless couple that takes part in a fictitious religious festival—where consensual sex between strangers is permitted. In 2014, members of the ruling Bharatiya Janta Party (BJP, one of India’s largest political parties) and conservative group Rashtriya Swayamsevak Sangh (RSS) alleged in a widely circulated petition that Murugan’s novel denigrated religion and Hindu women.

The conservative outrage over Murugan’s book quickly reached a fever pitch. Upper-caste leaders called for the novel’s withdrawal and for the burning of all existing copies. Protestors began calling for a violent response; Murugan and his family received threatening phone calls and had to relocate. The threats ceased when Murugan announced his “literary suicide” and stopped writing. When A landmark judgment in 2016 by the Madras High Court dismissed the criminal complaints and the petition seeking a ban on the book, Murugan emerged from his 19-month exile by publishing a collection of poems titled A Coward’s Song.

Indian writer Salil Tripathi once said that free speech in India was threatened by “a combination of state passivity, antiquated laws, and the existence of ‘the right to feel offended’.” Writers and artists have been both dissidents and casualties in this conflict. In 2012, conservative Muslim groups banned author Salman Rushdie from attending the Jaipur Literature Festival. Hindu activists coerced Penguin India in 2014 to recall and destroy all copies of The Hindus: An Alternative History written by U.S. scholar Wendy Doniger, claiming that the book hurt Hindu sentiments. As a fallout of the conservative backlash against Murugan in January 2015, another writer named Ma. Mu. Kannan watched as arsonists burned down his hut and studio. In February 2016, Arundhati Roy was charged with “contempt of court”—punishable with imprisonment—because of a viral text message, which claimed she was part of a conspiracy by Christian missionaries. In June 2016, a Tamil Dalit writer, Durai Guna, was boycotted and then arrested on fabricated assault charges.

A 2016 report by PEN International reveals “a growing culture of intolerance linked to a rising nationalist discourse has taken root in the country and has become more menacing since Narendra Modi became Prime Minister in 2014, creating an atmosphere in which ‘vigilantism has been given an implicit go-ahead’.” At its 82nd National Congress, PEN International passed a resolution on India to “immediately repeal overbroad and arcane sedition laws, and repeal criminal defamation laws and other legislation used to restrict legitimate expression”. PEN’s Indian chapter, PEN Delhi, has condemned recent freedom of expression violations against students, teachers, journalists, activists and writers.

Perumal Murugan writes from the margins: his stories are unflappable depictions of village life and the ever-looming threat of violence that, along with stigma, helps to maintain caste boundaries. If the climate for free expression in India continues to deteriorate, voices like Murugan’s will not be heard. In a 2005 article, Salman Rushdie wrote: “The moment you say that any idea system is sacred, whether it’s a religious belief system or a secular ideology, the moment you declare a set of ideas to be immune from criticism, satire, derision, or contempt, freedom of thought becomes impossible.” It is now more crucial than ever to support writers like Murugan, who are important voices for freedom of speech and expression in India.

Naheed Patel is an editorial intern with PEN America: A Journal for Writers & Readers. She has an MFA from Columbia University School of the Arts and tweets @naheedppatel