From Newspaper Clipping to Award-Winning Novel: On Lisa Ko’s The Leavers 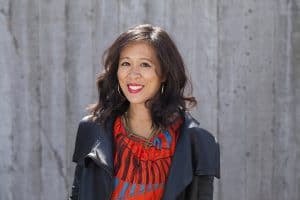 In 2016, the manuscript for Lisa Ko’s The Leavers won the PEN/Bellwether Prize for Socially Engaged Fiction, including a publishing contract with Algonquin Books. The Leavers is now a finalist for the National Book Award. In celebration of Ko’s nomination, we look back at how The Leavers became a PEN/Bellwether award-winning novel.

PEN America’s commitment to literary equality extends beyond the fight for freedom of speech to supporting the very writers creating the words we defend. In this vein, PEN America has been fortunate to join award-winning author of The Poisonwood Bible Barbara Kingsolver on her mission to give aspiring writers new lives as published authors through the PEN/Bellwether Prize for Socially Engaged Fiction. Lisa Ko found a home for her unpublished manuscript with the Bellwether last year. Since then, her book has found widespread success.

Ko found the seed of what would become her award-winning novel, The Leavers, in a May 2009 New York Times article: “Mentally Ill and In Immigration Limbo.” The article details the charged circumstances surrounding the incarceration of Xiu Ping Jiang, a Chinese New Yorker working as a waitress in Brooklyn—an undocumented immigrant arrested by ICE on her way to start a new job in Florida. Jailed for over a year by the time the article was written, often in solitary confinement due to her categorization as a suicide risk, the 35-year-old mother was also separated from her son, who was placed in the foster care system after being caught on his way to join Jiang in the United States. While her son went on to be adopted, Jiang was issued an order for deportation.

The article enraptured and angered Ko. In an interview with NBC, Ko said that the article caused her to question “what it said about us as a country . . . that these immigrant parents could be deported or seen as unassimilable while the children had to stay.” This first newspaper clipping became a folder of clippings about immigrant women and their children. Ko became fascinated by the ways immigrant women are portrayed in the media—namely, as “tragic victims or evil invaders.”

In The Leavers, Ko draws on her own experience as one of the only kids of color in a New Jersey suburb and creates a whole world behind a headline. This world took her nearly nine years to write; nine years that included a solo trip to Fuzhou, China, a variety of jobs, writing when she could, and most importantly, a personal goal to get 50 rejections a year.

2015 was nearing its end, and although Ko felt the novel needed at least six more months of work, she submitted the manuscript to the PEN/Bellwether Prize—she needed to “bump up rejections,” she told Hyphen Magazine. Months later, when Barbara Kingsolver called to tell the author that she’d won, Ko missed the call—she was on vacation in the Bahamas, cell phone back in her Brooklyn apartment. A week later, Ko was dumbfounded to find out that she had won, that her manuscript would be published by Algonquin Books, and that she would receive a $25,000 cash prize.

“When I founded the Bellwether Prize, I hoped to find and support writers who had the courage to tackle exactly the kind of risky, sensitive, topical subjects that you’ve undertaken in The Leavers,” Kingsolver, who founded and has funded the prize since 2000, told Ko in an interview for Algonquin. Speaking with PEN America, Kingsolver added that the goal of the PEN/Bellwether is “to break down barriers that discourage brilliant writers of socially engaged fiction from getting published, finding readers, and being taken seriously in a literary establishment that’s frankly afraid of political art.” Since 2000, “with every manuscript we’ve chosen for publication, every new writer of conscience the prize has launched, more walls come down.”

Kathy Pories, senior editor at Algonquin and a judge for the PEN/Bellwether for the last nine years, has seen manuscripts submitted to the PEN/Bellwether through submission, editing, and eventual publication. “With Lisa Ko’s The Leavers, I’ve come to grasp what is at stake with illegal immigrants, with deportation, with adoption,” Pories told PEN America. “Each book has taught me so much, but only in the way that fiction does: by taking you so inside a story and the lives of characters that the truths hit you on a visceral, emotional level.”

Added Kingsolver, “I’m proud as can be to see The Leavers earn the place it deserves in American Letters. For so many of us—writers, readers, imaginers of a better world—this is a dream come true.”

We extend our sincerest congratulations to Lisa Ko for her wonderful achievement, our earnest thanks to Algonquin Books for continually collaborating with us to publish incredible works like The Leavers, our gratitude for 2016 judges Laila Lalami, Brando Skyhorse, and Kathy Pories, and, above all, our appreciation to Barbara for founding and funding this prize.

An Open Letter in Solidarity with the People of Belarus

Check out the latest podcast episode from @pen_ev as we speack to 2018 Emerging Voices Fellow Jubi Arriola-Headley about the lack of equity in creative writing learning spaces and how going virtual actually increases access/equity for the fellowship: https://bit.ly/2E1ThTV.

Domestic news in Laos suffers from a lack of current content, extensive censorship and a heavy pro-government bias, citizens in several parts of Laos told RFA in interviews for the 70th Lao Media and Publication Day. https://bit.ly/2CrDXzw

i join this @PENamerica letter, along with a remarkable group of artists and writers, standing with the people of #Belarus. end the violence, release those detained, end repressive rule. https://twitter.com/psadovskaya2020/status/1294374914531745800