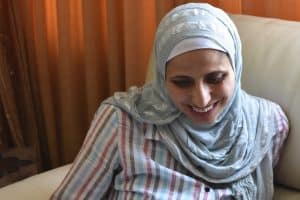 In the early hours of October 11, 2015, Dareen Tatour, a locally known poet and Palestinian citizen of Israel, was arrested by Israeli authorities at her home in Reineh, northern Israel, and placed in detention. Three weeks later, Tatour was charged with incitement to violence and support of terrorism, stemming primarily from a reading of her poem “Resist, My People, Resist Them” posted on YouTube and two Facebook posts made in early October of that year. Tatour has remained under house arrest while she awaits the outcome of her trial, during which time she has been prevented from accessing the internet, attending political gatherings, and publishing any new work. This October marks the two-year anniversary of her initial confinement, and coincides with an October 17 court date at which she is expected to receive a final verdict. If convicted, Tatour faces up to eight years’ imprisonment.

The prosecution of Tatour is of particular concern, as it not only threatens principles of free expression for Palestinian authors, but also represents more broadly an attempt by the Israeli government to litigate the meaning of a piece of literature. The government has based their case primarily on Tatour’s use of the word shahid, both within her poem and in an October 9, 2015, Facebook post of a photograph of Isra’a Abed, an Arab-Israeli woman shot by security officers; the post appeared next to Dareen’s profile picture, which contained the phrase “I will be the next shahid.” Tatour has said that this phrase referred to a similar show of solidarity in the wake of the July 2014 kidnapping and murder of Mohammed Abu Khdeir, a 16-year-old Palestinian, by a group of Israeli settlers. The meaning of shahid is fraught, used by many Palestinians to signify victims of Israeli state violence, but among Israelis commonly refers to those willing to commit violent acts of terrorism. A respected scholar of Arabic, Dr. Yonatan Mendel, has testified during the trial to the ambiguity within Tatour’s work and the difficulty of reconciling Israeli and Palestinian interpretations of the word. That Tatour’s trial and all discussions of her Arabic posts and poems have been adjudicated in Hebrew only compounds this complication.

As the October 17 verdict nears, the Israeli government has taken an increasingly hostile stance toward solidarity efforts in support of Tatour. On August 30, the Arab-Hebrew Theatre in Jaffa hosted an event that included readings of court transcripts from Tatour’s hearings as well her previously published poetry. In response to the event, the Israeli Finance Ministry has called for a hearing on reducing the funding of the theater for violating the so-called Nakba Law. The 2011 law gives the Finance Ministry the right to withhold government funding from organizations deemed to reject the legitimacy of Israel as a Jewish and democratic state. The defunding of the Jaffa Theatre would be the first such implementation of the law, and would come at a time of increased tensions between the Israeli government and advocates of free and peaceful artistic expression.

Artists outside Israel and Palestine have also been coordinating support for Tatour. Over 8,000 people, including Alice Walker, Eileen Myles, Rita Dove, Jacqueline Woodson, and more, have signed a petition calling for her immediate release. In an interview from August 2016, Tatour expressed optimism in the efficacy of support efforts, stating, “I believe that public pressure may force the Israeli authorities to reconsider the persecution of Palestinian artists, writers and young activists just because they express their rejection of oppression.”

Despite the high conviction rate of Palestinians charged with similar crimes, Tatour remains hopeful: “Hope is the foundation of life. There is a saying that I used to repeat before my arrest, and I still say it: ‘We dream in order to continue living.’”

Join Eileen Myles, Rita Dove, Jacqueline Woodson, and more in calling for the release and acquittal of Dareen Tatour »