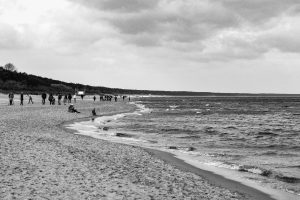 Brendan Rao was awarded Honorable Mention in Fiction in the 2019 Prison Writing Contest.

The sun transitions from going up to going over and the time-to-mission clock races to zero. I squint at the sky and some super-sense images the atmospheric topology of a cloudless sky, blue tinted brown, currents and crosswinds stirring a miasma of expended hydrocarbons. My own motor is warmed and revving. I look left, then right, to see the rest of my Squadron as prepared for flight as I am, but being least experienced, it is my place to wait.

Even though wind and distance preclude it, I know I can smell their anticipation, as heady as my own. It is a diverse blend, this anxiousness, this anticipation, but also, today will be my first in a live fire combat situation. The enemy is larger, stronger, better equipped. But ours is a cause of righteousness: the struggle for survival. The enemy has preyed upon all parts of this world, has attacked the very soil they live upon, not to mention what they have done to our territories. I fight this war on behalf of my father and mother, for my mate, for the young I hope to someday raise. The enemy is so confident in their supremacy that they’d probably laugh at the thought of my brethren as foes, would coo at us like infants having a tantrum if they were told of the blood feud my people have declared. The enemy’s decimation of my kin has been unilateral, without prejudice to gender or age and so our war shall be equally unbiased, a total war. Every man, woman, elder, or child is but a target.

Just then, the Squad leader is off and running. By the time the rest of us react, he’s already aloft and rising.

Brady’s toes squirm in the sand. His eyes stare downward at the shifting grains, barely noticing the warmth seeping into his feet. What he is most aware of, yet least willing to look at, was the endless expanse of water just beyond his vision. Never in his life had he been confronted by a body of water he couldn’t see the opposite bank of. Now, if he raised his head, he’d first see waves leaping nearly as high as he stood, and beyond that—water, just endless water for as far as he could see. The convexity of the shore meant that if he looked straight ahead, his peripheral vision was just as inundated with the ocean’s expanse as the foreground and his child’s mind was, as yet, unable to process something so vast. His mom, in her floral swimsuit (another new thing), had tried to lead him by his hand down the gentle slope to the water but the advancing and retreating water reminded him too much of a cat’s paw extending to capture a mouse. Many times he’d watched the family tom catch and release a mouse with a bored indolence, and the rhythm of the water was too similar to Kitty’s predatory certitude. He knew what Kitty did when the mouse stopped being entertaining, and in the face of the ocean, he didn’t doubt it would be bored with him on the instant. It didn’t matter how many other people gamboled in the waves, the other children squealing in delight at the water’s roughhousing. No, the sand—so different from the black soil sprouting the amber waves he’s familiar with—was all he could cope with. The alien scent of the saltwater mixing with the candy-sweet smell of the sunscreen his mother slathered on his face and back, the sound of the gulls crying and the people yelling and splashing in the crashing surf, all combining was just too much. His stomach heaves then clenches.

With his senses overloaded, there was no room for thought that this trip, this “vacation” (whatever that is) was to become even more of a nightmare than it already had. As angry or frustrated as his mom or dad or older brother might make him, he has never had an enemy. It was not a concept that he would be mature enough to comprehend for years, but that innocence would not shield him from those who had never seen him, had no idea of who he was, yet hated him nonetheless.

As we rise through conflicting air currents, our wings jitter as we shift into the formation we’d trained for. The mission profile allowed for a little leeway, but for this, my first mission, I have but one goal: my first kill. We didn’t have sophisticated targeting systems—no radar-guided or heat-seeking anything. Just timing and gravity. You learn your airframe, you learn to read the currents of the wind and its resistances. You learn acceleration and deceleration and momentum. And you practice, practice, practice. Hitting a stationary target is now second nature. I have mastered the computations of speed and trajectory, they are instinctual now. I can release a payload and be maneuvering away long before the target is struck, but until today, I’ve never fired at a living, breathing, moving target.

For the first kill, our unit has a rite of passage, an initiation: Don’t fire until you’re so close you can see the whites of your target’s eyes. The noise on approach will draw their attention.

Time your launch so that the enemy is hit as it looks up into the incoming fire. The enemy must know that their casual disregard has led us to a rage that shall never be requited.

Our flight path has taken us over territory I know well. Far below us, the sea meets the sand. Happy, frolicking families pepper the beach. I dip a wing and roll, nose down scanning the sand for a likely target.

They say you never forget your first.

Brady’s mom has been watching him and knows, as only a mother does, exactly what Brady needs: a distraction. She reaches into their red plastic cooler and pulls out something wrapped in white paper. “Hey Brady,” she calls, “you want a popsicle? I’ve got a chocolate one here.” She waves the package at Brady enticingly. Brady twists his head from looking down to looking sideways, still unwilling to permit himself a view of the water. He lurches in her direction, his dragging feet plowing furrows in the sand. His hands are already raised, reaching for the frozen treat. His mom tears and peels the paper wrapping, offering Brady the slightly melty confection. “Use both hands, Honey,” she says as his tiny fingers wrap around the wooden stick. As he takes his first nibble of the frosty sweetness, his mom puts her hands on his shoulders and turns him toward the water. With all of Brady’s attention focused on the icy, creamy texture of his popsicle, he takes no notice of how close his mother has steered him toward the foaming breakers. His focus has narrowed to only the treat in his hand and the sugary burst of flavor in his mouth. He sees only the object six inches from his face. His mother steps back a few paces and watches to be certain Brady isn’t panicking. Seeing his absorption, she continues to the shade of their giant umbrella. She thinks she’s making progress in acclimating Brady, her baby boy, into enjoying the ocean. She has only led a lamb to slaughter.

Is this fate? Is it favor from the gods? There, almost directly below me, in my flight path, a target all alone, oblivious to the world around him. This is it. I have my first target. With a few minor adjustments I’m diving, accelerating. My vision has tunneled to see only a small boy savoring a snack-on-a-stick. Unconsciously, a countdown has begun in the back of my mind. I don’t think of the sequence of actions I’m taking. Everything is happening by muscle memory alone. The countdown nears its end. Three, two, one . . . I release a primal scream.

With no restraint, Brady has devoured nearly half the popsicle. There was no room for delaying gratification. The wolf was loose and it was in a race against a melting point he couldn’t explain, but that he knew would rob him of as much of his popsicle as it could. Already, a rivulet of sugar and chocolatey cream ran over his pudgy knuckles. Yet despite this pinpointed focus, something drew his attention. Perhaps it was the flicker of a shadow from something at altitude hitting against the sun. Perhaps it was a barely audible hum of something at terminal velocity. Perhaps it was some primordial instinct that had preserved humanity when it was still just middling on the food chain.

Brady looks up and his face becomes a mask of horror. Reflexively, he gasps, his mouth gaping wide, sucking in a breath to power a scream of terror.

My eyes bulge. The blood in my veins sings. It is inevitable, my target has, against all odds, remained stationary. At this point, missing is an impossibility. If anyone saw my face, they’d think the velocity of my dive formed a grim rictus, but if they looked closer, they’d understand it was really a feral grin. This would be more than just a simple hit and run. This would be that hallowed, vaunted Double Kill. Time-on-target: Zero.

Brady’s mom is rummaging in the cooler, searching for a ginger ale when she hears a gull’s cry. Some dim, buried faculty of her brain notes its dopplered tone as quickly moving down, but far enough away to discount any need for concern. With satisfaction, she pulls the tab on the green can she’d just pulled from under the ice, that pleasing hiss Pavlovian music to her ears. As she takes that first sip, she looks up to check on Brady.

Numb fingers release the can to empty its sharp, sugary contents in a puling glug-glug onto the sand. A seagull is plummeting directly at her baby boy’s face. At the last possible second, it spreads its wings, slamming the brakes on its descent. The gull releases its bowels to spray ahead of it, landing with a sickening splat of supernatural precision. From Brady, an aborted scream turns into a gagging choke. With momentum still carrying it forward, the bird dips its beak and snatches the much-reduced remainder of the popsicle from Brady’s hand, then veers out over the water, lost in a crowd of other gulls, all jostling and screeching what sounded uncannily like cackling laughter.