from Neverending Quest for the Other Shore

By: Sylvie Kandé Translated By: Alexander Dickow May 1, 2018 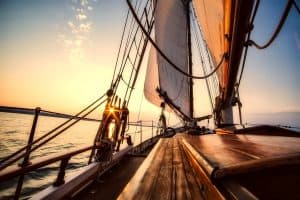 The following is an excerpt from Alexander Dickow‘s grant-winning translation of Neverending Quest for the Other Shore by French writer Sylvie Kandé.

Dickow writes: The following excerpt describes a final 14th-century epic battle between Guazabara, a South American cacique, and the king of Mali. The scene is a send-up of a hypermasculine epic hyperbole, amplifying the battle to more than a year of endless combat with uprooted trees and interspersed with “chit-chat,” as Kandé follows in the tradition of many female authors of epics before her and critiques the traditionally masculine and warlike genre. Her humor also recalls something of the wry humor of medieval French chansons de geste, like those describing the exploits of Guillaume d’Orange “of the short nose.” (In fact, the final lines of the excerpt are a modified version of the last lines of the Song of Roland, the greatest of the chansons de geste.) High epic is not often represented as a genre amenable to comedy, but examples of such fine humor do exist, even in the Western epic tradition. Kandé is capable of the most lofty and passionate language, but never takes herself so seriously as to weary the reader—a salutary equilibrium indeed. Kandé remains ever quick on her feet, shifting and modulating the verbal texture of the narrative. She introduces new voices as she pleases, never settling into a single pattern.

from Neverending Quest for the Shore

At the summit are two kings two armies

sizing each other up finding they are not unalike:

which didn’t fail to unsettle their fine martial display

Called to order and ready to mete out every woe

as men love to do when they think they see hostility

and so they drum and march and rant

Don’t you find them strangely coiffed?

And what outlandish garb: ah! but they wear no sarawil

So that war through this tumult

each camp calls upon its interpreter

and designates at length its most gallant soldier

into the arena the Malinke push Lansana

for everyone must agree

no Koné no army

His adversary bore the name Guazabara

(at the very least they cried to him thus)

Both were provided broad shields

a dagger a lance a crested helm

charms and heaps of flowers

Weighed down with all this gear

they butted against each other

spouting challenges as best they can

a consuming fire upon their bushy brow

The battle began in thirteen eleven

at high noon lasting no less than a year

These bronze-hearted giants were at it

battering each other for more than a year

cutting and thrusting at one another

so vigorously they broke their javelins:

many a time new ones were sharpened

so that they might end at last the slaughter

The crowd found in it a pastime at first

and stuffed them with game and mead

every time they made as if to yield

By signs the heroes sometimes tried

to chit-chat till their thirst for homicide

One year passed neither confounding his foe

Having finally stripped their splinters from each other

they uprooted two trees without much effort

and brandished each one high to better crush the other

and their mingled blood stained the fallen rocks

They were battling still when fair weather returned

At this the wearied audience murmured protest:

High time they left the fray

and for everyone to head home

It is good to know how to ride

knowing when to dismount is better still

Therewith Mansa and Cacique draw near

— each now well-versed in the other’s tongue–

they both agree to settle on a truce

take her for a wife says Mori she is yours

The cacique gives his word with no more fuss:

I know a fief to foster our progeny

you shall bring your men there and all your effects

For the affair believe me was intense

Thus did Kalira the jaguar marry Kafuma the short

that gentlewoman of the well-palmed hands

whose gums are blue whose necklaces are fine

Thus was Africa wedded to America

before they even knew their names

And the great greenish depths are probably depopulated

Here ends the tale of Abubakar the Second

which we ourselves this day conceived