From October 21 to 23, PEN America, in partnership with Index on Censorship, organized a series of college visits for Saudi journalist and filmmaker Safa Al Ahmad, during which she spoke with a diverse set of audiences.

The events were organized as part of Free Speech Week, by PEN America’s Campus Free Speech Project and Index on Censorship’s initiative Free Speech is for Me. Both organizations are dedicated to promoting and defending freedom of expression, and they work to draw attention to assaults on free expression around the world, including in Saudi Arabia, which has seen a dire crackdown on all forms of dissent in recent years, including arrests targeting activists, journalists, and intellectuals. Al Ahmad is a former recipient of the 2015 Free Expression Award for Journalism from Index on Censorship, and she previously participated in PEN America’s campaign to free its three 2019 Barbey Freedom to Write award honorees, Eman Al-Nafjan, Loujain Al-Hathloul, and Nouf Abdulaziz, two of whom recently marked more than 500 days behind bars. 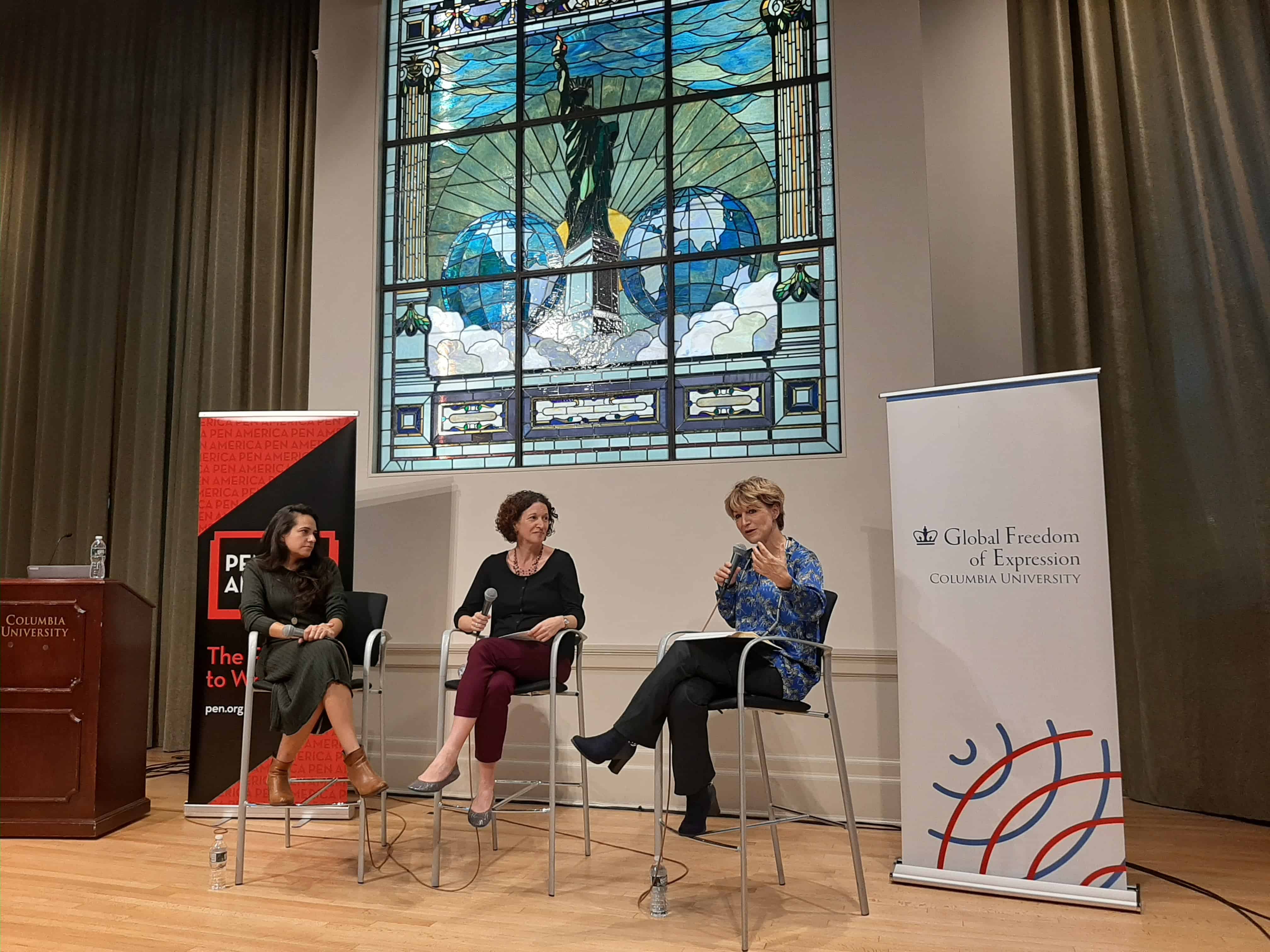 The first event in this series was held at Columbia University in New York. Saudi Arabia: Impunity and the Silencing of Dissent, focused on the absence of accountability in the extrajudicial killing of former Washington Post journalist Jamal Khashoggi by the Saudi government. The event featured Al Ahmad in conversation with Agnès Callamard, UN Special Rapporteur on extrajudicial, summary, or arbitrary executions and Director of Columbia Global Freedom of Expression, and was moderated by Karin Karlekar, director of PEN America’s Writers at Risk program. In a substantive conversation, Al Ahmad spoke about her work as a journalist covering rare public protests in Saudi Arabia, the broad crackdown on all types of expression and dissident voices, and about the impact of Khashoggi’s murder on the community of Saudi activists in exile. Callamard spoke about the inquiry she led into the killing of Khashoggi, in part due to frustration at the UN’s failure to act on his murder, and reiterated the importance of continuing to press for accountability. The event was organized in conjunction with Columbia Global Freedom of Expression, the Toni Stabile Center for Investigative Journalism, Columbia Law School’s Human Rights Institute, and the Columbia Journalism School.

On the second day, Al Ahmad traveled to Philadelphia for a lunch talk at Drexel University, with members of the Drexel PEN Society. In conversation with PEN America’s campus free speech project director Jonathan Friedman, Al Ahmad spoke about her career as a documentary filmmaker and the challenges of collecting footage surreptitiously in a country with an authoritarian government. Students were able to ask questions about how Al Ahmad got her start in filmmaking and the challenges involved in her craft, and drew parallels between journalism in the Saudi Arabia and the U.S. 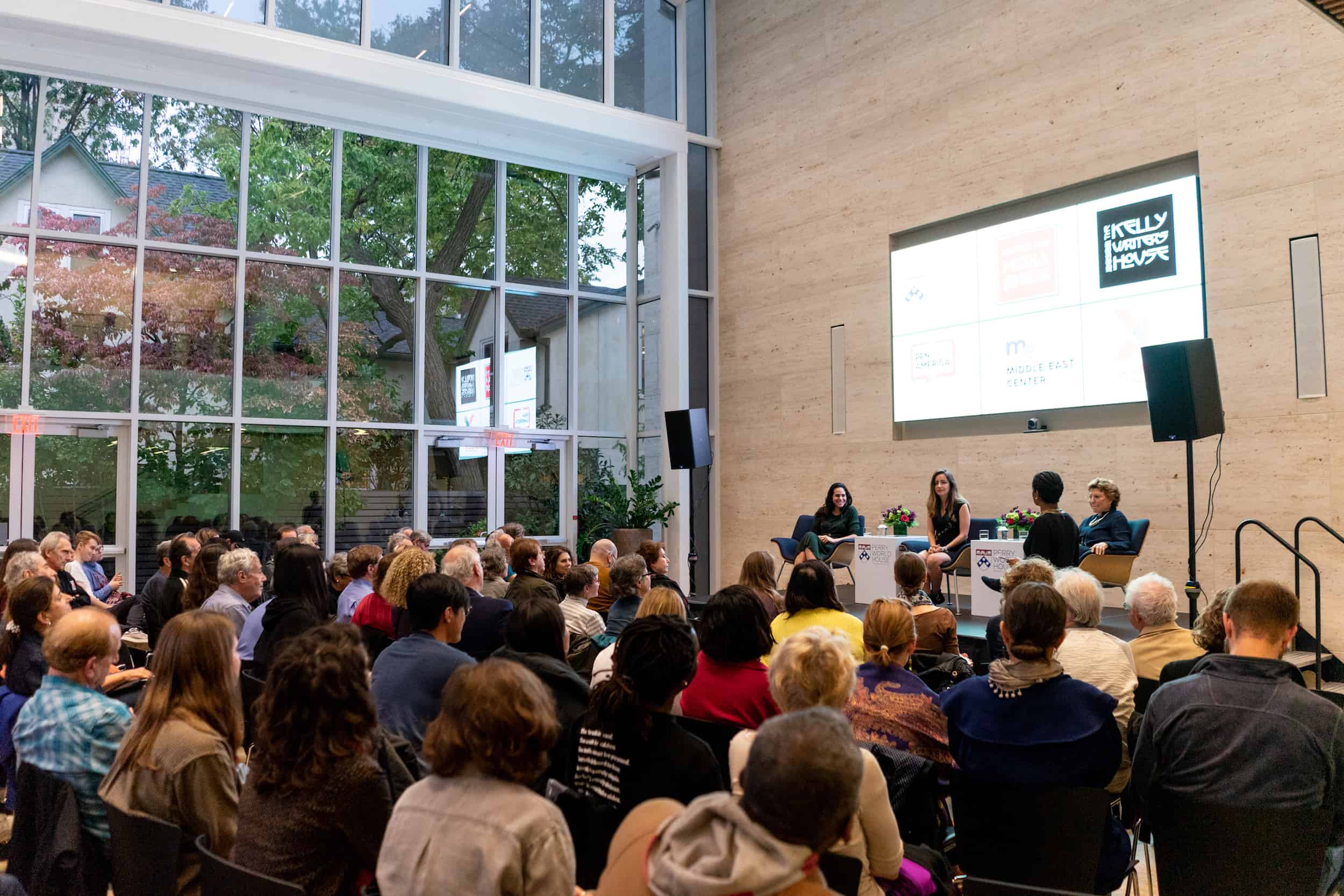 That evening, Al Ahmad also participated in a panel organized at Perry World House at the University of Pennsylvania, with Syrian filmmaker Zaina Erhaim and moderated by NPR’s Deborah Amos. Risk and Reward: Local Journalists Covering the Front Lines of War in Syria and Yemen featured a dynamic conversation among the three women, who were able to compare and contrast their experiences covering the conflicts in Syria and Yemen, and draw a common narrative about the hurdles facing women journalists from the Middle East when working with Western media. The exchange on stage was complemented by a lively Q&A with students, faculty, and members of the public in attendance, and then followed by a public reception. The event was co-sponsored by Kelly Writers House, Center for Media at Risk, and Penn’s Middle East Center. 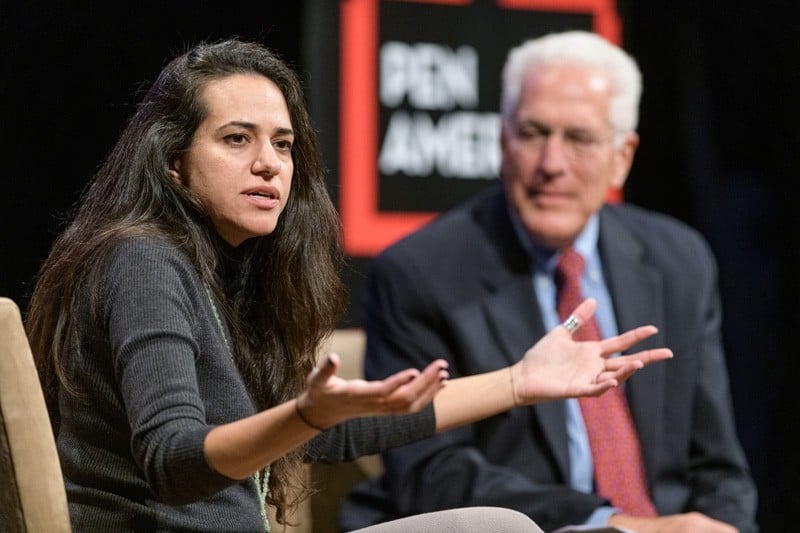 The final event in the series took place at the University of Delaware, where Al Ahmad was interviewed by Ralph Begleiter, professor emeritus at UD and a veteran foreign affairs reporter for CNN. The two spoke about her career and everyday life in Saudi Arabia, including the ways in which it has changed under the reign of Crown Prince Mohammed Bin Salman. Al Ahmad spoke about the state of women and the LGBTQ community in the country, as well as the state of independent artists, journalists, and scholars. The event was co-sponsored by the UD Initiative on Free and Responsible Expression, the Center for Political Communication, the departments of Communication, and Political Science and International Relations, and the Office of the Vice Provost for Diversity and Inclusion.

A video of the full event, with Q&A, is available here.