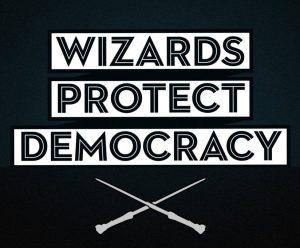 On January 3, Protect Democracy partnered with the Harry Potter Alliance to release a new toolkit for students, educators, and Harry Potter fans to take action to protect democratic values through the words and ideas of Harry Potter, titled “Wizards Protect Democracy.” The toolkit identifies six key areas that, according to experts, have historically signaled the decline of democracy. It then provides examples of each area within both Harry Potter and America today, including references to PEN America’s lawsuit against President Donald J. Trump, which seeks to stop him from using the machinery of government to retaliate or threaten reprisals against journalists and media outlets for coverage he dislikes. The toolkit also contains a call to action for each of the six areas. The toolkit has already been distributed through the Harry Potter Alliance’s network of thousands of members in over 30 countries around the world.

“Wizards Protect Democracy” is specifically designed to target young adults and demonstrate the importance of democracy in a new and appealing way. A recent study from the Democracy Project—a partnership between Freedom House, the George W. Bush Institute, and the Penn Biden Center—found that young adults feel less strongly about the importance of democracy than respondents over the age of 29. Just 39 percent of young adults gave democracy the maximum rating of “absolutely important”—far below the 60 percent figure for respondents as a whole.

The toolkit focuses on six core areas that Protect Democracy uses in defining the scope of their work. Those include politicizing independent institutions, spreading disinformation, executive power grabs, quashing dissent, delegitimizing marginalized communities, and corrupting elections. According to leading scholars, each element is an indicator that democratic functions are eroding within a society.

PEN America’s lawsuit and work in protecting press freedoms are highlighted as an example of how Harry Potter fans can push back on those attempting to quash dissent. As the toolkit says, “The ability to disagree with the government is central to the idea that in a democracy the government is run by the people and for the people.” Quashing dissent can take many forms, but in both Harry Potter and in the United States, it often manifests as attacks on press freedom. “Wizards Protect Democracy” highlights the work that PEN America does to represent writers and literary professionals against government retaliation and other forms of intimidation. The toolkit also discusses the lawsuit PEN America filed, represented by Protect Democracy, to challenge President Trump’s violations of the First Amendment.

The Harry Potter Alliance has a long history of working with young people to turn fans into activists. Using lessons from content that people already understand and cherish, the Harry Potter Alliance finds accessible ways to share messages and projects on equality and human rights. Similar to Rock the Vote in the 1990s, millennials are using cultural tools as a way to bring more people into activism and civic engagement. Fan activism methodology has also been used by groups registering voters at Black Panther and A Wrinkle in Time screenings, and groups fighting for minority representation in films like Star Wars and Ralph Breaks the Internet.

The lawsuit PEN America filed in October against President Trump seeks to stop him from violating the First Amendment by using the machinery of government to retaliate or threaten reprisals against journalists and media outlets for coverage he dislikes. The complaint asks the court for two remedies: first, a declaratory judgment where the court states that the president’s use of government power to retaliate against or constrain speech critical of him or his administration violates the First Amendment; and second, an injunction preventing the president from directing any official action against those who exercise their First Amendment rights. PEN America’s mission is to unite writers and their allies to celebrate creative expression and defend the liberties that make it possible. The president’s conduct harms PEN America’s Members by forcing them to do their work against the backdrop of credible threats of retaliation by the president. PEN America has seen the erosion of democracy in other countries when similar behavior has been left unchecked and allowed to undermine the free flow of ideas and the ability of citizens to hold governments accountable, and sees it as the organization’s duty to try to stop that from happening in the United States. Young activists too should be inspired to join the fight in defense of free expression.

A Troubling Trend: Free Expression Under Fire in Catalonia