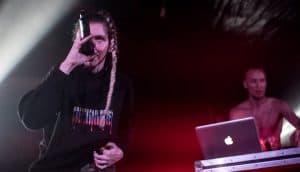 Amidst disturbing news about Russia’s seizure of Ukrainian naval vessels and their 23 sailors, it might be easy to miss developments concerning artistic freedom in Russia. On December 4, for example, Edward Boyakov, Zachar Prilepin, and Sergey Puskepalis, generally considered to be supporters of pro-Russian forces in the conflict in Eastern Ukraine, were appointed head and deputy heads of Moscow Art Theater (МХАТ им. Горького), a symbol of the Russian theatrical scene of the 20th century. And in recent weeks, the persecution of rappers and other young Russian musicians has continued and intensified. If the effect of the new Moscow Art Theater’s appointments has yet to be seen, the detention of musicians based on false accusations is already happening and has led to the cancellation of concerts all across Russia.

One of the latest examples of the Russian government’s hostility toward creative expression began late on November 21, when the Russian rapper Husky had his concert in Krasnodar, a city in southern Russia, canceled because, according to Husky’s managers, local prosecutors threatened the venue owners with closure if they allowed the concert to proceed. The prosecutors’ warning stated that Husky’s “Bullet-Dura,” “Judah,” “Pyroman,” and “Poem of the Motherland” video clips and lyrics contain calls for extremism and disseminate harmful information to minors about drugs and suicide. These excuses are familiar in Russia, as they are very often used to block any kind of radical or rebellious art.

The concert was then moved to a different location, but the power was switched off, so Husky started performing his songs for a crowd from atop a fan’s car. He had not yet finished performing before he was arrested and brought to the police. The next day, he received 12 days of administrative arrest for disorderly conduct.

Husky, whose real name is Dmitry Kuznetsov, has recently become popular in Russia. His lyrics are full of complex rhymes and rich metaphors, and together with a good beat, they are well received by both his young audience and music critics. Social justice is one of his primary topics, and Husky will periodically “hit with rhymes” those in power, including Russian president, Vladimir Putin. His music is used in theater, and he himself acts and sings in “Little Tragedies,” directed by Kirill Serebrennikov, a prominent Russian theater director currently on trial in Moscow on charges of embezzlement that are widely viewed as politically motivated.

Since the start of 2018, a number of young singers in Russia, such as Monetochka, Allj, and Jah Khalib и Matrang have seen their concerts canceled. They sing in different genres, but all have one thing in common: They sing for the youth and they do not mince words. Thus they, like so many other artists in Russia, have become government targets. A member of the United Russia party recently suggested that rap music concerts in Russia should be banned altogether, until “the situation is normalized in the youth environment.”

“Normalized youth” in the perception of United Russia means young people who are apathetic, agreeable, and rule-abiding, no matter what those rules may be. After Husky was taken by the police, the crowd blocked the streets and continued to sing his songs for another hour. On November 26, three of Russia’s most high-profile rappers—Oxxxymiron, Noize MC, and Basta—organized a well-attended concert in support of Husky. Not a demonstration, not a protest, but a concert, using the methods of resistance most familiar for artists.

Surprisingly, a few hours before the concert the district court in Krasnodar overturned Husky’s 12-day detention, and the performer was promptly released. Oxxxymiron noted that this concert “is not only and not so much about Husky, but in general about the situation with music in Russia . . . about all the artists who went through this in the past, and, I am afraid, about those artists who will go through it in the future.” He was quickly proven right when, on December 1, musicians of the band IC3PEAK, which authorities have condemned for supposedly promoting drug use in their songs, were detained at the railway station in Novosibirsk. The band’s concert was canceled, and they urgently had to search for a new venue. On December 4, police came to their concert in Saratov where they didn’t allow people inside under the pretext of checking the musicians for drugs.

In targeting popular performers like Husky and IC3PEAK, the authorities demonstrated that popularity provides no protection. It’s difficult to find calls for extremism in Husky’s songs, but for the Russian government, calls for young people to question the status quo are the most dangerous of all.