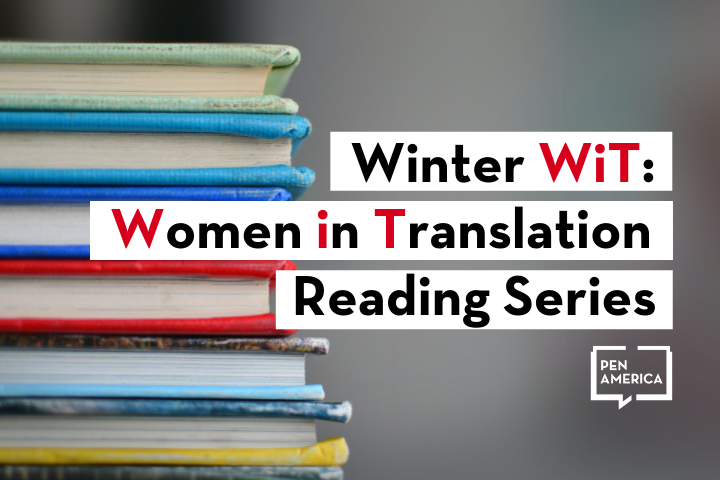 Did you know that women’s voices make up less than one-third of the work translated from other languages into English? PEN America’s commitment to support women’s voices in translation builds on efforts by blogger Meytal Radzinski, whose mission is to raise awareness of translated literature by women, queer, and nonbinary authors, as well as to promote gender and cultural diversity in literary publishing. This winter, our two-part virtual reading series will gather voices from across time zones for an international celebration!

Organized under the support of the PEN America Translation Committee, these events will bring together a total of nine translators, joined by their authors, working in nine languages from across the world, including Bulgarian, Canadian French, Finnish, German, Hebrew, Latgalian, Romanian, Spanish, and Ukrainian. The reading will be followed by a brief Q&A discussion, time-permitting. We hope you’ll join us for these one-of-a-kind bilingual readings!

The virtual Winter WiT: Women in Translation Reading Series will take place on February 28, 2022 and March 9, 2022 at 1:00 pm ET. The conversations will be moderated by Nancy Naomi Carlson, Marguerite Feitlowitz, and Katherine E. Young.

Marguerite Feitlowitz translates poetry, prose, and theatre from French and Spanish. Her translation of Night by Chilean poet Ennio Moltedo, is supported by an NEA Fellowship, and forthcoming from World Poetry Books. The author of A Lexicon of Terror: Argentina and the Legacies of Torture, she teaches at Bennington College.

Katherine E. Young is the author of Woman Drinking Absinthe and Day of the Border Guards. She has translated Anna Starobinets’ memoir Look at Him, fiction by Akram Aylisli, and numerous Russophone poets. Young, a 2017 National Endowment for the Arts translation fellow, served as the inaugural poet laureate for Arlington, Virginia.

School librarians vilified as the ‘arm of Satan’ in book-banning wars https://www.latimes.com/politics/story/2023-01-27/school-librarians-vilified-as-the-arm-of-satan-in-book-banning-wars

I have been thinking a lot of educational gag orders. @PENamerica is a great resource. https://pen.org/issue/educational-censorship/

Almost forty years ago, I took an undergraduate history class on WWII with Professor Larry Gelfand, a well-respected teacher and scholar @uiowa. 1/