Dorothy Gilbert: “The Life of a Great Nation is Sustained By Its Cultural Activities” 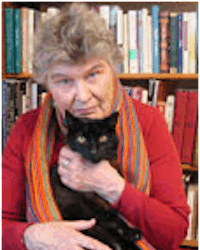 I write late, as Congress is about to consider this matter, to say that not only am I horrified on general principles because these organizations are so vital for this country’s cultural life, but because I myself have greatly benefited from the NEH. In the years 1984–85, I received an NEH grant of something above $18,000—I think it was $18,300—to live on for that year while I worked on my verse translation of the first known Arthurian romance, from the Old French of Chretien de Troyes (fl. ca. 1170), Erec et Enide. This gift made an enormous difference in how soon I was able to complete this project; the work, a poem in rhymed octosyllabics, is 6,878 lines long, and I was doing my translation in the form of the original, an exacting and time-consuming business. The book was published in 1992 by the University of California Press and won a Columbia University Translation Center Award (of $1,000) in 1993. (The Columbia University Translation Center is, alas, long gone.) This book is still in print, in paperback. It received plaudits I treasure, from world-class medievalists like the late Charles Muscatine and outstanding poets like Sandra M. Gilbert and the late Ruth Stone. Chretien de Troyes was an influential and important writer, and I am more grateful than I can say that I was able to make what I honestly feel was a valuable contribution to our understanding of older literature.

But, also—I have over the years attended two NEH seminars. They were invaluable, too, for the opportunities to work and learn and share, for the collegiality and camaraderie. The first, in 1998, at UC Santa Cruz, was in literary translation; it was a truly invaluable experience and was most helpful for the preparation of the book mentioned above. The second, in 1995, was at Northwestern University; the subject was “The Medieval Lyric.” Again, it was a priceless experience for a number of reasons, but chiefly for the information shared, the collegiality, the professional contacts, the encouragement of one’s work, and the wonderful library facilities at Northwestern and in Chicago.

I remember that the material sent to me when I applied for the year-long grant made a statement I can only paraphrase at the moment: that the life of a great nation is sustained and kept vital by its cultural activities, by its artists and scholars. Nothing could be more true. It will be a tragedy and a disaster if these programs are abolished. They are not, in the grand scheme of the national budget, so very expensive. In any case, they sustain the life of our nation and they must be preserved.