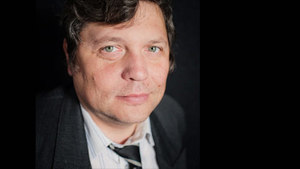 Maxim Gorky stands nonchalantly on a tall marble plinth, dressed in a peasant’s tunic, baggy pants stuffed into high boots, his hands comfortably linked behind his back. He appears to be dreaming as he gazes over a vast lawn toward Gorky Square and the horizon. For many years, a quaint bookstore had sat at the end of the square in Nizhny Novgorod, 258 miles from Moscow.

The square is still blooming with lime, oak, and fir trees, all characteristic of the places where Gorky had lived in Italy during his exile. “Everybody, my friend,” Gorky said, “everybody lives for something better to come.”

But the bookstore was razed, and a McDonald’s, with its garish yellow arches, has taken its place.

Not what Gorky had in mind.

One day in 1989, in this same place, a lone man courageously planted himself in history’s way. This man, Stanislav Dmitrievsky, called Stas by his friends, decided to confront the government, which was planning to raze the entire area to construct a new metro station. His decision was made earlier in the year after he read a samizdat copy of Vladimir Bukovsky’s autobiography, To Build a Castle. Bukovsky, who had been convicted in 1963 for organizing poetry readings in the center of Moscow, was in and out of prison for many years. Then, in 1976, he was exchanged for the former Chilean Communist leader, Luis Corvalán, and eventually settled in Great Britain.

Reading about Bukovsky’s experiences inspired Stas to take his political position. In 1989, he was 23 years old, and five feet ten inches tall, with a full-cheeked baby face, determined brown eyes, and thick, wavy dark hair. In Gorky Square, he stood defiantly still, with his hands behind his back (just like Gorky), in front of the bulldozers that were roaring-ready to shove over the magnificent, historic trees.

Stas was warned, but he would not move.

The workers backed off.

That evening, he pitched a tent on the square and went to bed. The next morning some fifteen hundred people arrived to support him. Petitions were signed; speeches were given.

The bulldozers returned. As cranes were lifting and preparing to lower concrete sections of fencing, people lay down beneath the sections. The workers retreated again.

More people brought tents and a camp town was established in the middle of Gorky Square. They were under close surveillance by KGB agents, some of whom were filming the activity from buildings around the open lawn. When these men mingled in the crowd, they were easily recognizable, dressed in drab, ill-fitting gray or black suits. For more than a month Stas and his friends kept up the pressure.

The government backed off.

An independent commission, the State Building Enterprise, was established to explore the situation. It came to the conclusion that there was a technical error in the building plan. The project was canceled.

A historian and writer by profession, Stas has made his living by working with a number of architectural studios chronicling the history, and pointing out the value of old structures. During the former regime his beloved Church of Ilya the Prophet had been used as a bakery. It is a square, red brick building with a golden cupola, tucked into a verdant hillside. When the USSR ceased to exist, the bakery was abandoned and slated for demolition. In 1992, to reclaim the building as a church, it was necessary for 10 people to form a congregation. Stas and nine of his friends did so, and the restoration began.

“The most significant event in my life,” Stas says, “was my christening in 1988.” He was 22 years old when he was welcomed into the Russian Orthodox Church. He says that his faith had a profound influence on his decision to defy the state.

“My great-grandmother’s name was Tatiana Andreeva. She was born in 1891 into a petit bourgeois family, graduated from gymnasium, and married a radical thinker named Ivan Andreev. They had one daughter, Raisa Dmitrievskaya. Because of her parents’ political views, Raisa’s options were limited; she earned her living as a babysitter. Eventually, her father Ivan Andreev, was deprived of his rights by the Bolsheviks and exiled to the town of Kuznetsk in the Urals, where he died without ever seeing his family again. His wife and daughter were also on the Bolsheviks’ list; it was a matter of time before the order for their exile would be issued. However, beggars whom they had fed and cared for before the Revolution hid the two women in a basement for a very long time.”

Raisa had a daughter, Alla Konstantinova, Stas’s mother, now a leading designer of water-purifying systems. Stas was born in April 1966. “I was raised without a father,” he says. “I was under the influence of my family history of politically engaged women.”

Stas’s mother has been truly supportive of him. “She dresses very well and is very tidy,” he says. “On the other hand, I don’t care what I wear. I’m well known for my messiness. I’m also terribly poor, but not worried about it. I admire Bukovsky, Sakharov, Mandela…all those who don’t trade their dignity for lentil soup.”

In 1999 Stas became the editor-in-chief of Pravo-zashchita (Rights Defense), a monthly newspaper published by the Russian-Chechen Friendship Society (RCFS), a non-governmental organization now based in Finland that protests human rights abuses. Eight years later, the newspaper was banned, and police officers went to his apartment to detain him and halt his human rights activities. But Stas and his colleagues continued, now on behalf of the Nizhny Novgorod Foundation to Support Tolerance. They began to work in a stuffy little wooden house in the middle of the city. The house was filled with plants and books and computers and files and people.

In March 2008, he began to experience a series of grueling events. The Russian authorities carried out extensive raids against active dissidents in the city. Stas’s new office was sealed. But his mother, Alla, was not cowed. She offered the kitchen of her small apartment as an office. There was workspace for four computers, many people, and a gray cat named Cat.

The judicial harassment picked up steam again in April 2011. Stas was now the chair of the RCFS. He was brought in for questioning about a 1200-page book, International Tribunal for Chechnya, of which he was the chief editor and co-author.

A year later, unknown assailants attacked the RCFS office with Molotov cocktails. In June, Stas was sentenced to 15 days of administrative detention after he took part in a protest. He was arrested again in July for participating in a protest against the demolition of a historic building.

And then his world turned dangerously ugly.

On November 4, 2012, Stas wrote on his Facebook page that his “wife phoned and said there was an attack at home at 4:30 in the morning. Both CCTV cameras were torn out, the glass in the kitchen windows were broken, the hole of the front door into the apartment was filled with cement glue.” It’s hard to imagine how his wife, Maria Artyomova and Irina, his teenage daughter, felt. Maria is a microbiologist and is not involved in politics. She purposely stays out of this part of Stas’s life. The men were wearing fear-provoking black balaclavas, hoodies, and gloves, and carried sledgehammers. While this violence was being wrought, Maria and Irina were alone. Stas was in Sweden for a conference. A police officer showed up an hour later. He dismissed the incident as minor and left. Following the intervention of human rights lawyers, the police at last sent investigators to photograph the evidence. No one has been charged.

Stas has another daughter from a previous marriage, named Tatiana, who is an actor. She works at a puppet theater in Nizhny Novgorod and lives alone. It wasn’t until the next day that she heard what had happened at her father’s apartment. Tatiana then realized that she had been threatened too. On the morning of November 5, she told her father, as she tried to leave her apartment, she couldn’t get the door open. At first, she thought it was a prank and called some friends to help her open the door from the outside. They found that the lock had been filled with cement glue. The police were called. They were told that it was the same kind of glue as had been found at Stas and Maria’s apartment. They refused to investigate.

The next day, leaflets were found scattered about the city center showing digitally altered photographs of Stas and other male activists that suggested they were in homosexual relationships. The leaflets implied that anyone attending the political protest rally scheduled for that day would be considered gay.

Now Stas is in a new office. It is one big room in the basement of an old house, modestly furnished, with some ancient computers. There are two fish tanks filled with Stas’s beloved fish, who, he says, keep watch over him; unpaid people guard the office at night. It’s never left empty.

The Russian media ignores Stas, but he is well known in Europe and the United States. When asked how it feels to be regarded as a hero, he says, “I don’t know who regards me as a hero…what I do know is that I am perceived as the city’s madman.” Perhaps it’s mad to continue in the face of such constant harassment—but Stas Dmitrievsky refuses to give up his human rights work.