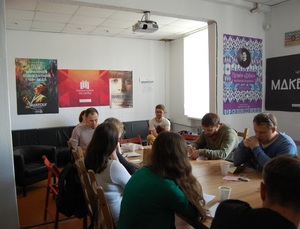 The PEN World series showcases the important work of the more than 140 centers that form PEN International. Each PEN center sets its own priorities, but they are united by their commitment to advocate for imperiled writers, promote literature from all cultures and in all languages, and advance the right of every individual to speak freely. In this series, PEN America interviews the leaders of different PEN centers from the global network to offer a window into the literary accomplishments and free expression challenges of their country.

This month we feature the Belarusian PEN Center. Their vice president Hanna Yankuta spoke to us.

What is a project that the Belarusian PEN Center has been working on in recent months?

There are two unions of writers in Belarus: those who are loyal to authorities and those who are independent. All members of Belarusian PEN are independent writers, and they have no support from the state. They can’t receive state awards; state bookshops (95 percent of all bookshops in Belarus) often don’t want to sell their books; they have no grants and writers’ residencies. Independent writers experience very difficult work conditions—almost all of them must hold down jobs which are not connected with literature. The main aim of Belarusian PEN is to improve the conditions for independent writers and give them more possibilities to write.

That’s why, during recent months, we have been working on projects to improve the literary climate in Belarus. With the help of our partners we created a residency for young Belarusian writers in Vilnius. They can live and work for two weeks in Human Rights House and receive a small grant for living. Belarusian PEN is also an organizer of some literary awards and in recent months we have worked on three of them: the Jerzy Giedroyc Literary Award, the Maksim Bahdanovich Début Award, and The Book of the Year. We organized a discussion about Belarusian literary awards in Belarus. We also help young writers to publish their books. We update our website, and work with our Facebook account.

At the beginning of the year we had a big campaign. It was connected with the case of Ihar Lohvinau’s bookshop. An independent publisher and a member of Belarusian PEN, Ihar Lohvinau’s license to publish and sell books (in Belarus one needs such a license to work with books) was withdrawn, and then he had to pay a draconian fine of 56,000 euros for working without a license, otherwise he could be imprisoned. Due to the help and solidarity of Belarusian people and international society, he paid the fine and now he is out of danger.

What are the key free expression challenges facing Belarus?

There are lots of problems with freedom of expression in Belarus. The great concern of Belarusian PEN is connected with the fact that Belarusian authorities are trying to create a positive image of themselves, and look not for political but economic motives to prosecute independent writers and publishers. The case of Ihar Lohvinau’s bookshop or the case of Ales Bialiacki are good examples.

The second problem you can find is in the first paragraph of our answer to your previous question. The state supports only writers loyal to the state, and independent artists have many difficulties with presenting their works to the wider public. All the popular channels like state TV, state newspapers, and state publishing houses are closed to independent writers. Even great novelists, poets, and critics who are very important for modern Belarusian culture can’t use these channels to express their ideas and to present their works. They must look for alternative ways to communicate with readers.

Would you share with us a sense of the literary traditions in Belarus?

It is difficult to define Belarusian literary tradition. For a long time Belarus was part of an empire. In the nineteenth century and at the beginning of the twentieth century, it was a part of the Russian empire, and later it was a part of the USSR until 1991. That’s why I consider the main thrust of Belarusian literary tradition to be the struggle for independence and the struggle for people’s minds, which were poisoned by propaganda. I think the problem is still topical and burning. Before 1991 it was very difficult because of censorship, and is still not easy because of state politics in a culture which includes so-called blacklists of artists, etc.

…and update us on something new in the literary world of Belarus today?

Perfect ironical poetry and a new generation of very interesting young poets—I think we can be proud of them. Among them there are feminist poets and poets who write about our painful history, ironical and lyrical poets, and poets who turn their attention to their inner world. The next thing is the growing interest in literary translations and in discovering other worlds via foreign literature: our translation school is really strong. But the main incredible miracle for me is that Belarusian literature still exists. Our literary market is completely saturated with Russian literature and Russian publishers and I’m happy that the writers who work with the Belarusian language can still find possibilities to write.

Who is a writer from Belarus that we might not know about? Would you introduce us?

Only one? I’d like to tell you about many Belarusian writers because they are not well-known in the world; first of all because there are not many translators who can read Belarusian. But if I must choose…I will not tell you about Belarusian poet Valzhyna Mort who now lives in the United States and writes in Belarusian and English. I will just say some words about Alhierd Bacharevič (Belarusian: Альгерд Бахарэвіч, born 1975 in Minsk). He is a Belarusian writer and translator. He wrote several novels and books of essays (some of them raised great discussions in society about our Soviet legacy and roots, about Soviet periods of Belarusian literature, etc.). His recent novel Dzieci Alindarki (Дзеці Аліндаркі, or Alindarka’s Children) was published in 2014 and has found success among readers.

Next month, look out for our conversation with PEN South Africa.