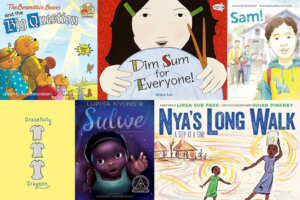 These are some of the books banned in Duval County, Florida.

PEN America on Tuesday presented a joint letter with We Need Diverse Books and authors and illustrators of 176 books removed from classrooms in Duval County, Florida, in January 2022 for “review.” They have been kept in storage for 10 months with little indication of when they might return to classrooms.

The removed titles were part of the Essential Voices Classroom Libraries Collection, purchased by the district in 2021. This collection “features characters representing a variety of ethnicities, religious affiliations, and gender identities,” and includes children’s picture books such as Sulwe by Lupita Nyong’o, Dim Sum for Everyone! by Grace Lin, and Berenstain Bears and the Big Question by Stan and Jan Berenstain.

PEN America reported the removal of the books in Duval County in its report released this past September, Banned in the USA: The Growing Movement to Censor Books in Schools.

These are the 176 books banned in Duval County:

“When you ban a book like Sam! and a collection like Essential Voices, you are not just taking away books, you are silencing communities. – Dani Gabriel, author of Sam!

“People can attempt to hide books like ‘I Am Jazz’ from children, but all these efforts do is punish the kids who need the information most.” – Jessica Herthel, author of I Am Jazz

“I’m past being angry about school districts banning my book. Now I’m just incredibly sad for the students. If we don’t help young people learn about and confront the painful mistakes America made in the past, how can we ever hope to progress?” – Art Coulson, author of Unstoppable: How Jim Thorpe and the Carlisle Indian School Football Team Defeated Army

The move came as part of cost-cutting measures under which the news service is also ending its radio programming in 10 other languages, including Persian, Chinese and Hindi.

#CRTForward Project Director @MerdithMade and @PENamerica's @jeremycyoung spoke to @DiverseIssues about how the #CRT debate is increasingly impacting higher education.
Read to learn more about shifting trends and targets in anti-CRT measures. 👇🏾
https://www.diverseeducation.com/from-the-magazine/article/15306014/the-critical-race-theory-debate

Iran is currently a global leader in jailing writers, journalists, public intellectuals, and voices of conscience, and in restricting and punishing their #FreedomToWrite. More about Narges Mohammadi's work and case can be found at: https://pen.org/advocacy-case/narges-mohammadi/.