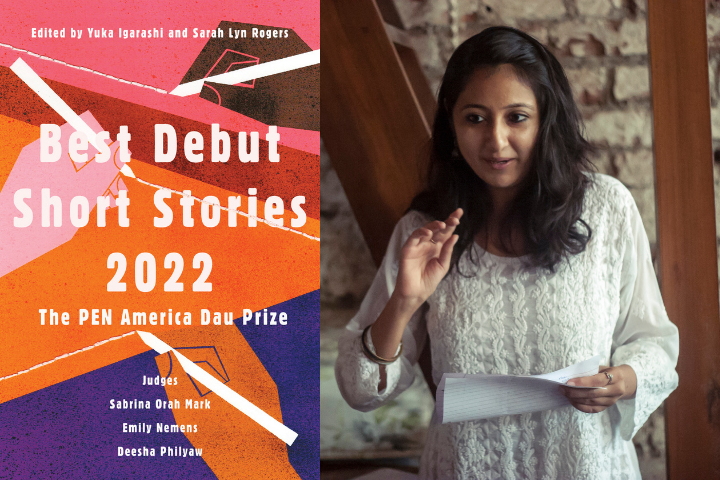 Preeti Vangani is a poet and writer who grew up in Mumbai, India. Her work has appeared in Threepenny Review, Gulf Coast, and Hobart among other journals, and has been supported by Ucross, Djerassi, and the California Center for Innovation. An alumnus of the program, she currently teaches at the MFA program at the University of San Francisco.

It was easy for me to cry. All I had to think of was the way Mummy said the word indee-pendent. Or the way my father cursed when Mum and I returned home later than his curfew for us. Or to remember the monsoon night Mum and I were stuck on the bus returning home from Maasi’s, in a pre- cell-phone era, relishing our double-decker toasted cheese sand-wiches, the bus moving inch by inch through overflowing gutters, not fretting about the umbrellas we didn’t carry, our mouths bap- tized by full-fat cheese, the two of us suspended in a delay that was out of our hands, in the hands of the rain that forced within us a slowdown, against which even Dad’s anger would come unfounded, it was something else, to be stuck on a road with my mother—to feel free and protected at once, a feeling I never felt with Dad, one I could conjure but only experience in fragments, if ever.

News is communicated to the reader through dialogue in this story. How do you approach writing dialogue, and why did it feel important for us to hear these characters’ voices?

Dialogue is for me one of the most natural ways to elevate urgency in a scene. While approaching dialogue, I am often thinking, what is the most natural syntax of speech for a certain character, how do their surroundings, their environments change up the way they talk, and their tone. In this story, it felt necessary to rely on dialogue because the main character finds that her Mumbaiya Hindi is different (or inferior) to the Hindi in which her work wife and boyfriend speak. So, spoken language yields a kind of agency and can reflect the minutest class differential despite all three of them being employed in the same organization. In the final bit of news that the main character receives, I wanted to highlight through dialogue what is not being said. That even the verbalization of betrayal (calling sex, sex) falls into her lap. That a politer cadence too can be punctured with violence.

To not get distracted by the idea of quick and frequent gratification. I was very moved by what Michaela Coel said in her 2021 Emmy speech, “In a world that entices us to browse through the lives of others to help us better determine how we feel about ourselves, and to, in turn, feel the need to be constantly visible, for visibility these days seems to somehow equate to success. Do not be afraid to disappear, from it, from us, for a while, and see what comes to you in the silence.”

I came into writing purely by chance after a decade of working as a marketing professional. Writing is, and will always be a subversive act. And what keeps me going is to keep reminding myself that the work itself, to create, is a reward unlike any other.

That grief is a conversation you need to learn to have with yourself alone.

I am never not writing about my mother. My roots in writing are through poetry and I have written extensively about losing my mother when she was fairly young. Personal experiences, and my struggle to reconcile early grief which coincided with me becoming sexually active, made me want to dive into the triangulation in this story.

I know it feels like a cliche, but it is truly humbling to be read by writers I so admire. And the prize has helped change gears on an idea for a collection of stories I had simmering for long. I definitely feel more encouraged to keep working towards it. I want to shout out all the brilliance in the anthology too. It is a joy to be among those sensational voices.