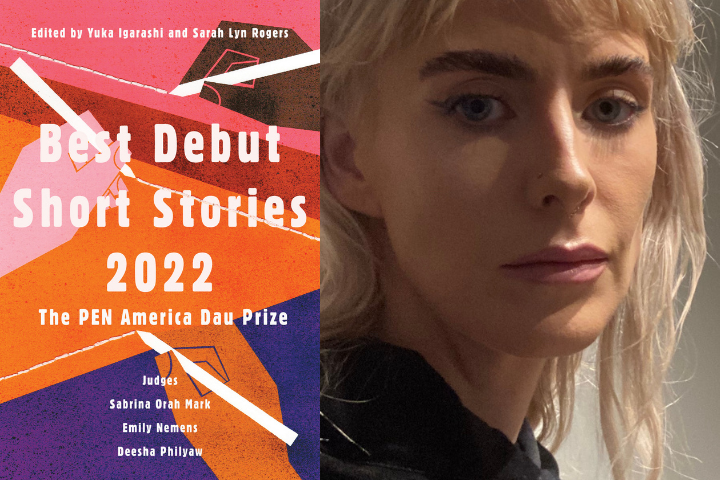 CK Kane is a Pennsylvanian in London. The high school dropout became a New Yorker, with a BFA in film from SVA before leaving an AFI screenwriting fellowship in LA to live in Amsterdam and Turin. She wrote and directed the feature Behind Some Dark Cloud, winning the Harlem Film Festival’s Mira Nair Award in addition to nominations and wins at other global festivals. She is writing her debut novel.

“Them Bones” was originally published in Hobart.

Mom loved to diagnose people, even though she didn’t have a degree in anything relating to psychology. She was obsessed with Luke’s alleged mood disorder, even fetishized it. She pontificated about how many historical geniuses also suffered from mental illness. In my case, she sent me to doctor after doctor until she’d found ones that would tell her what she wanted to hear. She’d enunciate to them her memorized medical jargon in a huskier, more sultry tone with a cashmere sweater conveniently slipping off one bronzed shoulder. I’d get fed any pill they’d dole out. Later, I’d learn to spit them out discreetly, except the fun ones. I once got a black eye from taking my sleeping pill and falling into the coffee table in our dark mahogany living room. Then I just started selling my meds to classmates.

You write about a lot of difficult themes in “Them Bones.” Can you tell us more about how you use Maxine’s humor to illuminate things that can be hard to talk about? Did the narrator’s voice evolve over the course of your writing?

I think I was acutely aware of the era the story takes place in. The Gen-X nihilism permeated every movie and record from that era, often resulting in a lot of sarcasm, a kind of fear of earnestness. Additionally, I think at that age, as a teenager, humor is a way to shroud emotions and vulnerability. But I also like to think that Maxine is a kind of meta-narrator, we can observe her reasoning with herself, telling herself how she’d like to feel about situation before she can actually feel it—and often her behaviors are things that draw a person out of their feelings. If her voice evolved, it was not conscious. I know she does seem lighter-hearted at the end, but she’s also just experienced a bizarre, surreal happening. It kind of zoomed out for me, at the end. My closeness to her went from within to an “establishing shot,” if you will.

Ha, I am an aspiring writer! Well, if I can offer anything it’s to keep a journal (or a notes app note, a word doc, etc) of ideas, even little clips. I find it to be a wealth of inspiration. Also: anything that feels like you shouldn’t write about, go toward. It will find you again no matter what, so you might as well take  charge, and it is much, much more pleasurable for the reader.

An escape, or a memorable experience…

Like most of my stories, this idea was a hodgepodge of smaller ideas that I’d kept logged over time. More than my other stories, I would say that it’s really an exercise in colors and textures. I was hyper-aware of the story’s patterns, color palette, textiles, architecture, etc. It was as fun to write as I hope it is to read. I loved this world where there was the juxtaposition of a 1980’s suburban upper-middle class interior, the sacredness of a teenage bedroom, the kooky timelessness of a hotel tiki bar and the grit of early 90’s New York.

If I remember correctly, the initially seed was planted with the humanoid-canine creature image. I think that came from a drawing I saw on a tour poster or something for Kurt Vile—there was this cartoon dog/human that just looked so cool. I laughed to myself. I built around it and ended up blending a bunch of themes and bits that I had floating around. I never could have expected it all to come together as well or as strangely as it did.

It’s been wonderful exposure for me as a writer, and greatly validating, and motivating as well. I’m really hoping to keep the ball rolling and get my book in shape and out into the world soon.