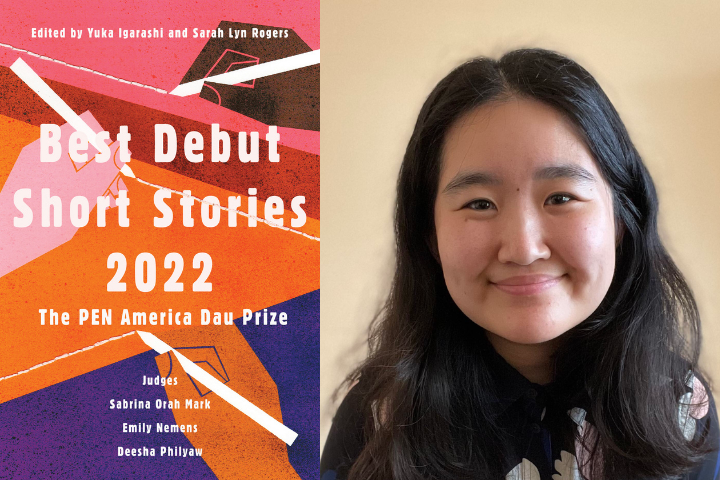 Catherine Bai was raised in Florida. She serves as managing editor of Underblong.

“Writing With Blood” was originally published in Flock.

Heat escapes in the form of a dream: Tea is growing in its ancestral home. It is stationary and reclusive until, one day, it is shaken by the violent winds of migration. It resists; it will not leave. But the winds persist. Finally, the tea bends. It does not break. It will begin to invade foreign soil and build shelter. Meanwhile, the winds grow stronger. They form new gravities that move the people of this ancestral home. When these people arrive in new lands, they will find that their tea has been waiting for them. The tea is strange—changed, shifted, mixed—but a reminder. When sipped, its roots will pull the migrant deep within its flavor.

This story is rich in sensory detail: tastes, smells, and sensations. How do food and drink relate to your writing process? Are there certain things that transport you in time or place?

Back when I was writing this story, I probably would have said that food and drink were essential to my writing process and that they were among my only portals to connecting with my family and my heritage. And in the story, it’s food and drink that similarly offer the main character a bodily connection to her heritage, even when linguistic and cultural ties have been eroded.

But now, language is competing with food/drink as my portal of choice. When the pandemic began, I decided to revive my Mandarin studies (after many failed years of Sunday Chinese school as a kid!), and the effect has been profound. Using the language returns me to my childhood relationships with my grandparents, and to some inner part of myself that is still and hidden until language activates it and makes it known, like primal muscle memory. It returns me to a time when English hadn’t invaded my psyche just yet.

As I reflect on my writing process for this story, I realize that language was my true starting point. That first section of the poem was the first piece I wrote for this story. And this line was the first that felt true and essential: “But remind her of a poem—five characters per line, four lines—and blood will rush to her mouth like a river to the sea.”

To start thinking of yourself as a writer, even before—especially before—you have any kind of writing credential to your name.

The other thing I’ll say is to pay attention to your obsessions. A piece of advice that is commonly touted or griped over is “write what you know”—which I don’t disagree with. Whatever you’re obsessed with is naturally what you’ll know a lot about. But obsession gives you what knowledge can’t: an inexhaustible source of motivation and momentum. What can’t you let go of? What wakes you up in the middle of the night? What draws blood no matter how dull the blade is? For those days when writing is the last thing you want to do, return to your obsessions and you’ll find a way back to writing.

What do blood ties mean when you’re tied by nothing else and when you don’t share enough language to know the most basic, human parts of your family? Then again, what is more, basic and human than blood?

I’m not sure, actually! I think this story was the product of a lot of thoughts and emotions that wouldn’t let go of me in my college years, around literacy and family and the primacy of English and what I chose to lose in order to assimilate and be “successful.” That choice was unconscious, but a choice nonetheless. It was also around this time that I started reading Asian American literature for the first time (the first time!) and I realized how wrong I had gotten it all. This was the first story I’d ever written that had any kind of “Chinese-ness” or any part of my family life in it. Fittingly, this was also the first time I’d ever experimented with form. In short, this story marks the first time I really put myself into my writing—my whole self. And that made all the difference.

I’d never really thought of myself as a writer, but the Dau Prize prompted me to change that mindset fundamentally. I know that makes me sound like such a hypocrite, after my answer to the “advice” question above; I shouldn’t have needed this big piece of external validation to take my own advice!

And this is not to say that I haven’t had this kind of prompting before—I am indebted to mentors who treated me like a writer before I really believed it myself. The Dau Prize only removed the last of my mental roadblocks and gave me permission to believe what my mentors were signaling all along (permission, of course, that I should have been able to give myself!).

The Prize has also affected my writing life in very tangible ways: I received emails from several literary agents after news of the Prize went out, and it was the first time I had ever spoken about the ideas and themes in my work with any kind of authority or ownership. The experience of speaking on those phone calls was incredibly validating—it made me feel like a real, serious writer with things to say (who knew?!).