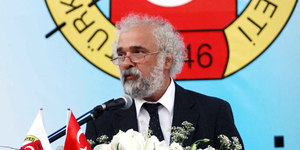 Ragip Zarakolu is a writer, publisher, human rights defender, and freedom of expression advocate in Turkey who has been targeted yet again in a government investigation due to his work. As part of a wide-ranging action against the newspaper Özgür Gündem, for which Zarakolu had worked as a columnist and editor, police raided his legal residence in Turkey, the home of his son, breaking down the door and seizing his books. Zarakolu lives in exile abroad and neither he nor his son were present at the time of the raid.

The raid came alongside the arrest of more than 20 other journalists and employees of Özgür Gündem, which was shut down by decree as part of the state of emergency in Turkey following the failed coup of July 15, 2016. Turkish courts stated that the outlet made “propaganda for the PKK,” the Kurdistan Workers’ Party, which is listed as a terrorist group, and acted “as its de facto news outlet.” Zarakolu and eight other senior members of the paper face charges of “spreading terrorism propaganda,” “membership of an armed organization,” and “attempting to destroy the unity of the state and territorial integrity of the country,” potentially carrying a sentence of aggravated life imprisonment. On December 29, 2016, as the trial opened, Zarakolu and six others were granted conditional release pending continuation of the trial in January. In May 2017, police continued their harassment of Zarakolu by raiding Belge Publishing House and seizing over 2,000 books.

As the director and owner of Belge Publishing House, co-founder of the daily newspaper Demokrat, founding member of the Turkish Human Rights Association (IHD), chairperson of the Freedom to Publish Committee of the Turkish Publishers Association (TPA/TYB), and one-time chairperson of the Writers in Prison Committee of International PEN in Turkey, Ragip Zarakolu has been subject to a lifetime of harassment from the Turkish authorities. After graduating college in 1968, Zarakolu began writing for magazines such as Ant and Yeni Ufuklar, both of which focused on issues of social justice in Turkey. In 1971, a military government assumed power in Turkey and instituted a crackdown on writers it deemed subversive. Following a conviction and a three-year stay in prison, Zarakolu steadfastly refused to abandon his campaign for freedom of thought, striving for an “attitude of respect for different thoughts and cultures to become widespread in Turkey.” Since his writings were repeatedly banned in Turkey for their criticism of the country’s military regime, Zarakolu began to turn his attention to abuses of human rights by governments in South America and elsewhere.

In 1977, Zarakolu and his wife Ayşe Nur, a recipient of the PEN/Barbara Goldsmith Freedom to Write Award in 1997, founded the Belge Publishing House, which has been a focus for censorship since its inception. Its publications have not only drawn the government’s ire: Zarakolu’s office was firebombed by an extremist rightist group in 1995, forcing it to be housed in a cellar. Despite the death of his wife in 2002, Zarakolu has continued to publish writings critical of human rights violations around the world, especially in his native Turkey.

Zarakolu’s staunch belief in freedom of expression, his vocal campaign against banning books, and his persistence in publishing works that violate Turkey’s repressive censorship laws have resulted in a catalog of indictments dating back to the early 1970s. His aforementioned 1971 conviction and three-year imprisonment stemmed from accusations by Turkey’s new military government that Zarakolu was in cahoots with an international communist organization. In the 30 years since his release, Zarakolu has continued to defy Turkey’s censorship laws, especially Article 312 of Turkey’s Penal Code, which outlaws “making divisive propaganda via publication.” The Belge Publishing House operated under a barrage of charges brought by Turkish authorities against Zarakolu and his wife. Over the years, such charges resulted in further imprisonment for the couple, the wholesale confiscation and destruction of books, and the imposition of heavy fines.

September 5, 2018: 6 years after the beginning of the case in which he is charged with “aiding and abetting an illegal organization” due to a speech he made at an event of the now-defunct Peace and Democracy Party (BDP), the court issues red notice for the Zarakolu. Zarakolu, who has been living in exile in Sweden, describes the decision as “harassment.”

March 19, 2012: Zarakolu was formally indicted under the charge of “aiding and abetting an illegal organization” under Turkey’s sweeping anti-terror laws, for which he could receive up to 15 years in prison if convicted. He was among 193 defendants named in the indictment. He was released pending trial on April 10, 2012, still at risk of being sentenced to 7.5 to 15 years in prison. His son Deniz remained in prison under pre-trial detention until May 12, 2014. Ragip Zarakolu has been living in exile outside of Turkey since 2014.

October 28, 2011: Ragip Zarakolu was arrested along with more than 40 people. Turkish authorities arrested up to 1,000 scholars, writers, publishers, and rights advocates during a two-year crackdown targeting activists who focus on Kurdish issues. Zarakolu’s son, Deniz Zarakolu, who is an editor at Belge Publishing House and a Ph.D. student at Bilgi University, was arrested weeks earlier, on October 7.

March 10, 2011: Ragip Zarakolu was convicted and sentenced to a fine, and Güler to a 15-month suspended prison term. Zarakolu and Güler both deny the accusation that the book promotes violence and state that they are both committed to greater understanding of—and a peaceful resolution to—Kurdish issues.

June 10, 2010: A court acquitted Ragip Zarakolu of “spreading propaganda” for the banned Kurdistan Workers Party (PKK) under Article 7/2 of the Anti-Terror Law for publishing Mehmet Güler’s book More Difficult Decisions Than Death. The case was initiated in May 2009, when the prosecutor initially stated that some parts of the novel evoke sympathy for the PKK, but at a hearing on November 19, 2009, the prosecutor then pointed out that no crime had been committed and called for the two to be released. However, at the next hearing on March 25, 2010, another prosecutor expressed the opposite view—that the book does provide terrorist propaganda. Mehmet Güler was convicted on the same charge and sentenced to 15 months in prison, but remained free pending appeal.

Later that year, Ragip Zarokolu returned to court on charges of spreading propaganda to support the PKK under the same law, following the publication of another Mehmet Güler book, The KCK File/The Global State and Kurds Without a State. The first hearing took place September 30, 2010, and was attended by Maureen Freely, writer and translator of Orhan Pamuk’s recent novels, and Johann Hari, journalist for the Independent newspaper, on behalf of English PEN. PEN Sweden also sent two representatives: the writer and PEN board member Firat Ceweri and the writer Maria Modig. Zarakolu did not attend the trial due to ill health, although the court issued a writ compelling him to attend. The trial was then postponed until December 2, 2010.

June 17, 2008: Acknowledging the Armenian genocide is illegal in Turkey, and Article 301 has been used as a vehicle to punish those who do so; Zarakolu was convicted of “insulting the State” under Article 301 for publishing Jerjian’s book. He was sentenced to a five-month prison term, which was reportedly subsequently commuted to a fine. He appealed the conviction.

May 3, 2007: Zarakolu was acquitted of similar charges under Article 301 in another case for the publication of Professor Dora Sakayan’s book, An Armenian Doctor in Turkey: Garabed Hatcherian: My Smyrna Ordeal of 1922. This case had its first hearing in August 2005, when the prosecutor demanded a six-year prison sentence for Zarakolu for “insulting the Army” and also “insulting Turkishness” by publishing this book. Attila Tuygan, the translator of Dora Sakayan’s book, testified as a defense witness and stated that as translator of the book, he held himself responsible. As a result, Zarakolu was acquitted, but a new trial against the book under Article 301 with Tuygan held responsible was still expected.

December 2004: Zarakolu was first charged for publishing a Turkish translation of British author George Jerjian’s book The Truth Will Set Us Free: Armenians and Turks Reconciled under Article 159 of the Turkish penal code, which made it illegal to “insult or belittle” various state institutions. That article was replaced in March 2005 with the now-infamous Article 301, a new version of the insult law that conservative prosecutors have since used against dozens of writers, journalists, and publishers in Turkey. Article 301 was slightly amended on April 30, 2008.