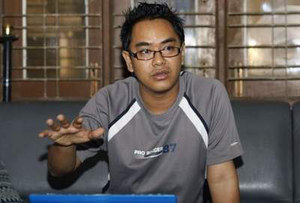 Arrested in February 2008, Nay Phone Latt was sentenced to a total of 20 years in prison for allegedly disrupting morality and endangering state security, stability, and order. On January 13, 2012, he was among 651 prisoners to be released in a widespread presidential amnesty. He returned to his home in Rangoon and has begun writing once again.

Nay Phone Latt is an influential Burmese blogger and poet. A member of the opposition National League for Democracy, Nay Phone Latt also owns several Internet cafes in Rangoon. His Burmese language blog, which is not explicitly political, has been praised by foreign media such as the BBC for providing invaluable news regarding the military crackdown in Burma in 2007 during a period of particularly strong censorship.

Nay Phone Latt was arrested on January 29, 2008, under section 5 (J) of the 1950 Emergency Provision Act, which criminalizes any attempt to “disrupt morality” or to “disrupt security, stability or the restoration of order.” Initially held at the Interior Ministry, he was transferred in early February 2008 to Insein Prison, famous for its inhumane conditions, where he had restricted contact with his family and legal assistance.

After being held for over nine months, Nay Phone Latt was sentenced by a specially-assembled court to a combined 20 years and six months in prison on November 10, 2008. The court, formed to prosecute political dissidents within prison walls, was closed to the public. Nay Phone Latt was not allowed legal representation after his lawyer was sentenced to prison time for contempt while protesting unfair hearings.

The total sentence imposed upon Nay Phone Latt consisted of two years for violating Article 505 (b) of the Criminal Code, which punishes defamation of the state, three years and six months for violating Article 32 (b) of the Video Act, and 15 years for violating Article 33 (a) of the Electronics Act. The Electronics Act, which contains provisions establishing long prison terms for disseminating news that is considered to tarnish the image of the government, has been used increasingly to silence political voices since the protests in 2007. His offenses included posting a cartoon of military leader Than Shwe and possession of a banned video.

On November 16, 2008, Nay Phone Latt was transferred from Insein Prison to Pa-an Prison in Karen state, 135 miles from Rangoon. He joined the ranks of political dissidents who have been transferred to isolated regional prisons with poor or nonexistent medical care and limited food. Many families of these prisoners have reportedly been prevented from visiting.

On February 20, 2009, a court in Rangoon reduced Nay Phone Latt’s sentence by eight and a half years, but he was released in 2012 as part of a widespread presidential amnesty.

In November 2015, Nay Phone Latt was elected to the Yangon Region parliament as a member of the National League for Democracy.

Nay Phone Latt is a founder of Myanmar PEN and the 2010 recipient of the PEN/Barbara Goldsmith Freedom to Write Award.

Irrawaddy Flowing on the Road

Me and My Dreams, Part 1