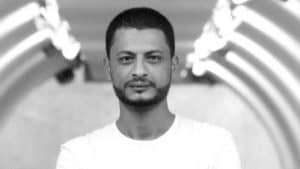 Galal El-Behairy is an Egyptian poet, lyricist, and activist who has been in detention in Tora Prison in Cairo since March 2018. In early 2018, El-Behairy collaborated with musician Ramy Essam on the song “Balaha” and was planning to publish a book of poetry, both of which caused him to be detained, tortured, and imprisoned unjustly for several months awaiting a court indictment. El-Behairy was arrested five days after the release of “Balaha,” disappeared for a week, and exhibited signs of torture when he appeared before the High State Security Prosecution. El-Behairy is being held in detention under the High State Security’s charges of terrorist affiliation, dissemination of false news, abuse of social media networks, blasphemy, contempt of religion, and insulting the military. The verdict in his case was expected on May 16, but was then rescheduled to June 27, 2018, and again to July 28, 2018. El-Bahairy is currently imprisoned due to the Egyptian Military court decision on July 31, 2018, to sentence him for three years in prison, including a fine of 10, 000 L.E. for his poetry, which is accused of insulting the military and spreading false news.

El-Behairy had planned to release his latest book of poetry, The Finest Women on Earth (خير نسوان الأرض), in 2018. In his words, the book is a testament to “the value of women and of their good deeds in this world.” He focused on the strength and perseverance of women in Egypt, who he feels face unique pressures while ultimately being responsible for the success of the men who make up the majority of the country’s workforce. In an addendum on the back cover of the book, he admonished the current public attitude in Egypt regarding terrorism and conflict plaguing the Arab world. He condemned the silence surrounding events of recent decades as counter to the valor, honor, and respect he was taught from a young age. Despite having permission to publish the book and having already printed the first edition, El-Behairy was never able to release the book. In a statement defending this book of poetry, El-Behairy wrote, “Each one of us loves their country and each one of us fears for their country. However, each one of us has a personal vision that does not contradict the country’s interest.” El-Behairy intended to release the book at the beginning of the year, the book’s publisher, Dar Da’ad Publishing and Distribution, terminated their contract with El-Behairy.

On February 26, 2018, a month prior to Egypt’s presidential election, exiled Egyptian musician and activist Ramy Essam released the song “Balaha.” The song featured lyrics written by El-Behairy that criticized the current state of the Egyptian economy and levels of political corruption. Essam was nicknamed the “Singer of Tahrir Square” and the “Singer of the Revolution” for his influential role during the Arab Spring, but has since been forced into exile.

In advance of the delayed verdict,  the Perpetuum Mobile’s Artists at Risk (AR) program began an online petition to the Egyptian Minister of Justice, Minister of the Interior, Public Prosecutor, and Military Public Prosecutor calling for the release of El-Behairy. In addition, a coalition of PEN organizations, SafeMuse, Freemuse, and Perpetuum Mobile’s Artists at Risk (AR) program published an open letter calling for all charges against El-Behairy to be dropped in both the Military Court and the High State Security Court.

January 24, 2019: Galal El-Behairy, along with four other political prisoners, is on a hunger strike from January 24 until February 11 to commemorate the 2011 Egyptian revolution and protest the injustice that remains in their country.

July 31, 2018: The Egyptian Military court in Cairo sentences El-Behairy to three years in prison and fines him 10 000 L.E. for his poetry. He is officially sentenced for insulting the military and spreading false news. El-Behairy had already served 150 days in detention waiting for his sentencing.

July 26, 2018: UN Rapporteurs release a statement in support of El-Behairy. “We urge the relevant authorities to investigate the alleged ill-treatment of Mr. El Behairy, and to acquit him of all charges related to the creative expression of his political views,” the statement says.

June 27, 2018: The Egyptian Military Court delays El-Behairy’s sentence announcement a third time. The verdict is now expected on July 28, a month after the already postponed date. Without any limits to how many times the court can delay a sentencing, postponing a verdict is frequently used as a means of keeping a person imprisoned indefinitely.

May 6, 2018: El-Behairy attends his first trial in the Military Court. He was informed that his verdict would be delivered three days following on May 9. The Court later delayed the verdict until May 16, and now the Military Court’s decision is expected on June 27, 2018.

March 3, 2018: El-Behairy is arrested. His family and lawyers did not know his whereabouts until he appeared before the High State Security Prosecution one week later, at which point he exhibited signs of severe beating and torture.

The Prosecution ordered him to undergo a forensic medical examination, but the findings of the examination have not been shared with the public or his lawyer. El-Behairy was told that he was facing charges from the Military Court involving both the content of his yet to be released book and the lyrics of “Balaha” for their criticism of the current government.

The release of the song “Balaha” was a courageous action given that dissidents, especially free speech activists, were being harshly persecuted, prompting artists, activists, journalists, and citizens to self-censor. The internet and press in Egypt have been qualified as “Not Free” by Freedom House. It is increasingly common for journalists to be arrested and detained on charges of publishing “false news.”

In March of 2018, the government imposed additional free speech restrictions prior to the presidential elections. Journalists covering the election were not allowed to speak with people at the polling sites or ask voters how they had voted. The crackdown also affected musicians. Popular Egyptian singer Sherine Abdel-Wahab was recently taken to court because of a joking comment she made in a music video. She suggested that a fan shouldn’t drink the water from the Nile and was subsequently sentenced to six months in prison. In this climate of censorship, “Balaha” drew much attention within Egypt and internationally.

Repression in all its forms is not a new phenomenon in Egypt. During the Arab Spring, the Egyptian army frequently countered artists’ nonviolent activism with violence. Ramy Essam, singer of “Balaha,” conceived an anthem for protesters in Tahrir Square in 2011 by reworking protesters’ chants into lyrics. The anthem, entitled “Irhal” (“Leave”), urged then-President Hosni Mubarak to resign. The song galvanized hope for thousands of protesters, but Essam suffered brutal beatings and torture by the Egyptian army. His songs were banned and he was no longer allowed to perform publicly. Essam was finally forced into exile in Finland, where Perpetuum Mobile’s Artists at Risk (AR) program organized a residency for him in 2014 and 2016, and then Sweden, where International Cities of Refuge Network (ICORN) provided him with an artist residency 2014-2016. An arrest warrant was issued against Essam by the high-state security prosecutor for “Balaha.”

“We wanted to start a dialogue about where Egypt is now and where it could be. Our art is not created to make people fight. It is music, it is how we feel. It is a song.” —Ramy Essam

Read A Letter From Tora Prison

Egypt’s Grim Blow to Freedom of Expression and Human Rights: The Tortured Poet Galal El-Behairy Must be Freed