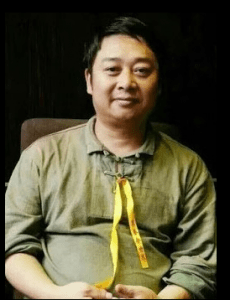 Chinese performance artist and human rights activist Chen Yunfei was charged in 2015 with “incitement to subvert state power” and “picking quarrels and provoking trouble” after visiting the grave of Tiananmen Massacre victim Wu Guofeng. After two years of detention without trial, Chen was sentenced on March 31, 2017, to four years in prison where authorities reportedly tortured him twice and kept him in shackles for prolonged periods of time. Chen was released upon completion of his sentence on March 25, 2019, but he was arrested again only six months later for making comments in support of the Hong Kong anti-extradition protests. After a month in detention, Chen was conditionally released and placed under house arrest.

Chen Yunfei is a performance artist who works at the intersection of human rights activism and art. His art is overtly political, promoting the Chinese pro-democracy movement and addressing human rights abuses in China and the legacy of the Tiananmen Square Massacre.

December 2021: Chen is sentenced to four years in prison for a retaliatory charge of “child molestation.”

July 2021: Chen’s case is transferred to the procuratorate for review and prosecution. Chen is currently detained in the Detention Center of Chengdu District, Chengdu.

April 30, 2021: Authorities formally arrest Chen on the charge of “picking quarrels and provoking trouble.” Two weeks later, Chen’s lawyer visits him and reports that Chen is in good spirits.

March 25, 2021: Chengdu’s Pidu district authorities detain Chen on a new charge of “picking quarrels and provoking trouble” after Chen reportedly wrote an article published online based on information from his visits to Sichuan schools during the past two years.

February 3, 2021: After mailing postcards to prisoners of conscience and posting the pictures on Twitter, Chen is subsequently forcibly summoned by Chengdu police for 24 hours on suspicion of “insignificant crimes.” According to Chen, the police also question him about his meetings with underage students.

June 1, 2020: Chinese authorities hold Yunfei in “soft detention” in a hotel for five days in the city of Chengdu after he spoke online about the 1989 Tiananmen Square massacre. Yunfei said that civil unrest in Hong Kong and in China “show[s] us that the Chinese government hasn’t found the root of popular malaise, and also that the things we were fighting for in the 1989 protest movement were the right things. There is no reason why we shouldn’t publicize and commemorate June 4 in any number of ways.”

October 18, 2019: After nearly a month, authorities release Chen from detention and place him under house arrest for six months, according to friends of the activist.

September 21, 2019: Chengdu authorities officially notify Chen’s family that he is criminally detained for publishing comments in support of the protesters in Hong Kong

September 19, 2019: Chen is criminally detained by state security police from his home in Gucheng township in Chengdu after he repeatedly shows public support for the anti-extradition protests in Hong Kong. He gives interviews to foreign media, and Chen’s friend, Luo Kaiwen, said that if authorities want to press charges, they “have a lot of different options.”

March 25, 2019: Chen is released at the end of his sentence and allowed to return home.

March 2017: Chen’s one-day trial finally occurred on March 31, 2017, after which he was sentenced to a four-year prison term. While in detention, Chen has suffered multiple human rights violations, including being forced to wear shackles for extended periods of time and torture. Chen’s attorney, Sui Muqing, has been detained illegally twice after visiting his client.

July 1, 2016: Authorities in the province of Sichuan delay Chen’s planned trial. The trial had been expected to start on June 30, 2016, according to his lawyer.

March 2015: On March 25, Chen was detained after visiting Wu Guofeng’s gravesite with a group of activists and Wu’s family members in remembrance of the Tiananmen Square Massacre. Wu was an amateur photographer and university student who was ultimately stabbed to death with a bayonet by a Chinese soldier during the Tiananmen Square Massacre. In late April of that year, police formally charged Chen with “incitement to subvert state power” and “picking quarrels and provoking trouble”—charges typically brought against dissidents. Chen was held in detention without trial for over two years.

Freedom of Expression in China

In recent years, addressing the dire situation for free expression in China has been one of PEN America’s signature campaigns. With the world’s largest population, and with increased economic and political heft, China’s extensive censorship apparatus limits speech both within and outside its borders. Although new digital platforms have expanded the means of expression, they have also provided more opportunities for repression: in China, even a simple Tweet can land its author in jail. Since President Xi Jinping took office in early 2013, he has overseen an extensive crackdown on free speech, implementing additional laws and censorship controls on the Internet, media, and publishers. In addition, individual Chinese writers, journalists, and creative artists have been censored, harassed, imprisoned, and even disappeared after they speak out about sensitive topics such as the rights of ethnic and religious minorities, corruption, and the lack of democratic reform. Several dozen are currently behind bars because of their writings or creative expression. Read more about freedom of expression in China here.

“Chen’s Labor Camp”: A performance commenting on both the Chinese penal farms and Chen’s oppression by the police in which Chen played the role of “Chen Prisoner Yunfei,” on a recreated labor camp.

Another work was a funeral for his passport and permit for traveling to Hong Kong and Macao following the restriction of Chen’s travel due to his outspoken performance art.

"One of the major findings of our studies on disinformation was that the engines of mis/disinformation, rather than creating social disfunction out of nothing, are actually reflecting and amplifying preexisting social fault lines," says @GuyMentel during our event w/ @PENamerica.

This #pridemonth, we're bringing back some of the great interviews we've done with LGBTQ+ writers. Today, we revisit our #PENTen interview with @sonofolokun about how his identity impacts his poetry, his daring poems about Queers in Nigeria & more: https://bit.ly/37qntD1.