A Love Letter to Brazilian Modernism: On Translating Veronica Stigger 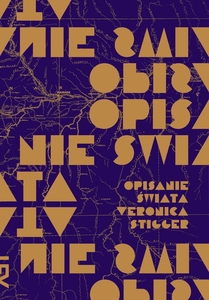 Zoë Perry is the recipient of a 2015 PEN/Heim Translation Fund Grant for her translation of Opisanie swiata by Brazilian writer Veronica Stigger. Read an excerpt of the translation here.

“Wait, but I thought you translated from Portuguese?” is a question that often follows when I reveal the name (likely butchering its pronunciation in the process) of Veronica Stigger’s novella, Opisanie świata. The unusual title of this Brazilian book, which, I’m told, translates to “description of the world,” is also the Polish title of Marco Polo’s Il Milione, or The Travels of Marco Polo. Written as a sort of fictional travelogue, the narrative jumps from one richly recounted vignette to another. As Stigger’s debut novel, it won the Brazilian National Library Foundation’s Machado de Assis prize, the Açorianos de Literatura prize, and the São Paulo Prize for Literature in 2014, and was a finalist for both the prestigious Jabuti and Portugal Telecom for Literature prizes.

I was first introduced to Veronica Stigger’s writing a few years ago, at the launch event for my first book-length translation. My co-translator handed me what looked like a glossy children’s board book and remarked: “Here—you like the weird stuff.” It was Os anões (The Dwarves), a collection of short stories and flash fiction, and I devoured it on the train home. Hilarious, shocking, ludicrous, and even violent, the stories were brilliantly multilayered, packing an incredible amount of experimentation, observation, reference, and social commentary into writing that often didn’t exceed 100 words.

Set at the end of the 1930s, Opisanie świata begins with a letter, written by a young man named Natanael to his father, Opalka, in Poland. Natanael writes from a hospital bed somewhere in the Amazon, pleading for the father he has never met to come visit. A ticket to Brazil is enclosed. With his home country on the brink of war, Opalka embarks on a journey across the ocean. At the beginning of his trip he meets Bopp, an eccentric Brazilian polyglot and world traveler, who decides to accompany him to Brazil. Nearly the entire book takes place on the train and ship that take them there, where the two unlikely travel companions encounter an interesting, international cast of characters. When they arrive in Brazil, before parting ways, Bopp gives Opalka a small notebook as a gift, to write his own “description of the world.”

Opisanie świata is pastiche at its best, rich in intertextuality and references to the Brazilian modernists of the ’20s and ’30s, whose cultural cannibalism—the so-called “anthropophagy” movement, a term coined by Oswald de Andrade in his 1928 Manifesto antropófago—urged the critical devouring and reworking of European culture. Stigger deliberately disregards the boundaries of genre, employing a range of narrative styles, switching between the first and third person, letters, diary entries, fragments lifted from a (fictitious?) South American guidebook, period advertisements, picture postcards, song lyrics, and even poetry. These texts are not always connected, and range from the absurd and hilariously surreal to the sentimental and sweet.

Opisanie świata is a groundbreaking work of world-class Brazilian fiction by an author unknown in the English-speaking world. While contemporary Brazilian literature in translation has enjoyed an uptick in interest over the last few years, much of the writing Stigger herself references remains untranslated or is long out of print. A discovery in its own right, Opisanie świata can lead readers to these unsung works—the Brazilian modernists’ return passage.

Veronica Stigger was born in 1973 in Porto Alegre, Brazil, and has lived in São Paulo since 2001. She is a writer, art critic, and university professor. She holds a PhD in Art Theory and Criticism and completed post-doctoral work in Italy and Brazil. Coordinator of the Creative Writing program at the Academia Internacional de Cinema (AIC) in São Paulo, she is also Professor of Art History at the Fundação Armando Álvares Penteado (FAAP). She has published 10 books, including collections of short fiction and children’s literature. Opisanie swiata is her first novel.

Zoe Perry is a Canadian-American translator who grew up in rural southeastern Kentucky, and is currently based in London. She has translated work by several contemporary Portuguese-language authors, including Rodrigo de Souza Leão, João Ximenes Braga, Mia Couto, Gonçalo M. Tavares, Lourenço Mutarelli, and Sérgio Rodrigues. She blogs about untranslated Brazilian books at gringareads.com. In 2015, Zoe was selected for a literary translation residency at the Paraty International Literary Festival (FLIP) in Brazil, sponsored by the British Council.