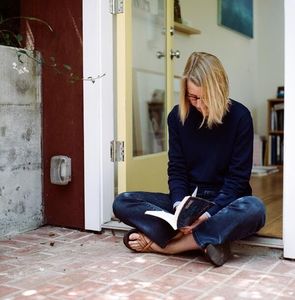 Denise Newman is the 2015 recipient of the PEN Translation Prize, for a book-length translation from any language into English published in 2014. Baboon, by Naja Marie Aidt, is translated from the Danish and published by Two Lines Press.

Denise Newman: Susanna Nied, a friend and mentor, first introduced me to Naja Marie Aidt and Baboon. Nied translates Aidt’s poetry, and she thought I might be interested in her fiction. We had a similar arrangement with Inger Christensen’s work. Nied has translated all of Christensen’s poetry, and I’ve translated two of her novels.

The first story I completed was “Honeymoon.” Aidt liked my work and so I continued, one story at a time. Through our correspondence we gradually got to know each other, and after I had completed four or five stories it was clear that I would translate the entire book.

Newman: It took me three years, partly because I focused on one story at a time, honing each one and trying to become familiar with Aidt’s style. It was also necessary emotionally to take breaks between stories, since they’re so intense. This method worked well for Baboon because the narrative style changes dramatically from story to story, and so it was helpful to have the space to fully immerse myself in each one. Another, smaller, issue was with all the obscenities. It was difficult to match the flow and degree of emphasis. We got some help from Aidt’s son, who had recently attended high school in Brooklyn and was up on the current slang.

Newman: I worked more actively with Aidt than I did with Christensen. Aidt is fluent in English, having lived in Brooklyn the past few years, and this is a tremendous advantage. I’m a conservative translator, meaning I keep as faithfully to the original sense and construction as possible. Some stories had a lot of short sentences that didn’t give the same pleasing rhythm in English as they did in Danish. With Aidt’s permission, in some places I combined sentences to make the English flow better. Together we also came up with new names for characters when the Danish ones were unpronounceable for English readers. I would never have made such changes without the author’s involvement. Another advantage was when I had two words I couldn’t decide between (for example, should I use sad or melancholic?), I was able to run them by her to hear which one she thought was more precise.

When I was almost done with the translation, I got a travel grant from the Danish Ministry of Culture to work with Aidt in Copenhagen one summer when she was living there, and we went through the entire manuscript together. At one point we took a break and walked around the botanical garden where one of the stories is set. She showed me the huge silver maple that the protagonist is so attached to, and I saw the stone garden, which I was having difficulty finding the name for in English. It was an incredible experience to stroll through the actual setting of a story with the author, experiencing it in the present while listening to Aidt talk about the story’s origins.

Newman: The great pleasure of translating is being able to enter into the timelessness of the text. When I sit down at my desk, everything drops away—deadlines, tasks, worries—and I’m able to lose myself in the work. Unlike my own writing, which bears some anxiety from not knowing what will come next, the original text is finished and all I need to do is remake it in English—not to say that’s easy! But there’s comfort in such concentrated work. It must be the language equivalent of what musicians experience.